Gotta love it when something meant to instigate, instigates. Especially when what it instigates is a conversation of such far-reaching socio-psychological and physiological proportions. Jamie Lynn Grumet, the mom featured on TIME magazine's cover breastfeeding her 3-year-old son, is this year's most controversial subject of a photograph by far. A mom-turned social activist-turned witting attachment parenting advocate and heroine memorialized by the media... her single cover photo sparked heated debates across the nation -- and they have been gorgeous to watch.

Clearly, the idea of breastfeeding a child into toddlerhood has touched a nerve in our country. (Notably, it doesn't spark any debate in other cultures.) It has raised reactive and feisty concerns and simultaneously activated the pro-attachment movement far and wide. Sign me up to add to the fever-pitched overnight education about attachment parenting, helmed by the likes of the beautiful Mayim Bialik, doctors including Dr. Jay Gordon and the cape-wearing heroine, Jamie herself.

There are a multitude of facets to this conversation around attachment parenting that are worthy of being explored. For the purpose of focus and brevity (and because it would be impossible to cover them all in one article), I start with what I think could be one of the first antidotes -- a way to put out part of the fire that burns at the heart of this debate, in my opinion, that is -- to illuminate and outline what the first stages of development in a child's growth toward adulthood are all about.

According to Harville Hendrix's chart of the stages of development, in his book entitled Keeping The Love You Find, the first two stages of a child's life are attachment (which synthesizes the theories of Freud, Erik Erikson, John Bowlby and Harville himself) and exploration (informed by Margaret Mahler and expanded and named by Harville Hendrix). During the attachment stage, dependency reigns and is appropriate. The speed with which we can consistently meet our child's needs for emotional and physical nurturance and sustenance is paramount. He or she learns, through consistent and responsive physical nurturing touch and care, to trust life and to love and to connect: with other, with god, with self... This stage of development tells children that not only can they trust life, but that THEY EXIST, and that it is okay, maybe even great, to be here.

I personally believe that the attachment stage, done well, can circumvent countless addictions later in life because many of these addictions are often a temporary attempt at feeling this sense of connection. If a child's needs during this stage of development are not met, he or she will be staving off a haunting sense of cellular disconnection and loneliness for a lifetime. they will not have effectively internalized a loving nurturance as their own love-style.

The next stage of development is called the exploration stage. It's during this time that a lil' one goes out and explores his or her own world, comes up against the first limits and ultimately learns how to navigate frustration and disappointment in the face of those limits parents set during a socialization period. We, as parents, are asked to guard their exploratory and curious nature while instating boundaries and limits (hopefully delineating between their behavior and their very beingness).

While attachment and exploration are linear, the path from one to the other is also non-linear. There is a definitive overlap, and this overlap is at the heart of today's debates.

The goal of attachment parenting is to provide your child with a deep sense of connectedness and bonding, while the goal of the exploration stage is to provide space for their utter freedom to express their authentic selves while being protected and kept safe. This delicate blend will make for a securely attached, connected and authentically expressed child, who feels free, safe and protected. If these stages are thwarted, a child's ability to navigate adulthood and connect with human beings later in life is at risk. That's the real irony that many people are confused by -- attachment parents believe that the more we tend to our child's needs during those first stages, the MORE independence and interdependence he or she will have later in their life! (Note, we are not tending to their every want.) These are qualities they will need in order to have any kind of intimacy in future relationships. (In her books, Facing Codependence and The Intimacy Factor, Pia Mellody addresses this clearly.) It may be counterintuitive, but it's also a beautifully daunting responsibility to have: to intuitively know whether a child needs space, protection, guidance or nurturing from moment to moment -- not to mention helping them delineate between their needs and wants. It is no small task, this being an attuned parent thing.

Which brings me to breastfeeding. We have years of exhaustive research that extolls the physiological and psychological virtues of breastfeeding, skin-on-skin touch, proximity, object constancy and consistency. Science, psychologists and nutritionists alike support its benefits. Interestingly, for babies, it also provides needed protein, nutrients and antibodies that promote better immune systems.

And it's good for moms as well: (IMPORTANT: This is not meant to hold up the "perfect breastfeeding mother" as a model or add fuel to the already competitive element of breastfeeding that is an undercurrent among mothers -- one of a few shames about the tagline of the TIME mag cover, by the way). I believe that the choice around breastfeeding is one a mother and family can only make for themselves, and I know that the decision not to breastfeed when a woman wants to can be among the greatest heartbreaks of her life and warrants profound empathy.

All in all, it is our intention, our intuition, our life circumstance and our healed hearts that dictate how well we navigate these developmental stages, not our standard of "doing it perfectly."

But the conversation around the pros of breastfeeding, interestingly, is not where most of the attachment parenting debate gets heated. Most attention is paid to the idea of whether a developmental stage should have a rigidly enforced beginning and end. A cookie cutter enforcement timetable presupposes that a child won't be able to wean or shift to the next stage of development in his or her own perfect time. Just as we can't force a child to walk or read, providing this trust and freedom that they'll reach stages when they're ready seems braver and certainly a lot more humane than rigidly forcing a young person to stop doing something before he or she is naturally prepared to do so. Their natural weaning is assured, even when our parental bandwidth and understanding is not.

A toddler doesn't nurse 24/7 the way a newborn does. There is no smothering going on (in the most functional of us breastfeeding mothers). When a child is used to breastfeeding, there is no quicker way to soothe their nervous systems than by cradling them and offering what they have equated with peace and connection since birth. The primary reason for breastfeeding into toddlerhood is to maintain that consistent connection, health and sense of well-being (frankly, in both the child AND the mother) until, optimally, they naturally wean.

There is a delicate cocktail of hormones that are at play in the act of the tender exchange between mom and child. As an example, the contents of the breastmilk changes over time to adapt to the growing child's needs as they get older -- there is no better indication that nature had it planned perfectly.

The debate, impossible to be complete in a short article here (there is the conversation around sexuality and the fear of impropriety that would need to be addressed, among others) must of course take into account what is best for the child's parents -- their context and socio-economic climate -- and what is best for the sustenance of the marriage and child him/herself. Each family's answer will be different based on lifestyle, very important financial considerations, proximity to help and community, resources, personal vocations, location, whether they are single parents, etc. All of these considerations play a role in whether someone feels as though they, as a parent, have the bandwidth to "nail" each stage. There is no question that our culture -- politically and otherwise -- needs to better enable and support families' parenting choices, so that the making of them doesn't threaten anyone's being able to put food on their plate.

For now, poetically, it seems that all of our outcries bond us. The two extremes I see people fearing the most are child neglect on one end and smothering and impropriety on the other. It seems as though a healthy moderate version of parenting, where our shame about our bodies and our sexuality, our traumas and our resistances to connection are addressed, is where most of us, ultimately, really want to fall.

That most, if not all of us, want the same thing and have different ways of getting there winds up being the moral of the story.

I am reminded of what a dear friend said to me when she noticed that I was, in a way not uncommon among new mothers perhaps, being really hard on myself. She said to me, "Alanis, there is nothing that consistent, loving behavior can't heal." So, for the purpose of distilling this complex and passionate debate to simple clarity, I would say we are all attempting to love our children well, so they can move forward into the future and part the red seas for us, while being as connected, functional, resilient and healthy as possible. And our understanding of the journey they take, with us as their guardians, is one that requires us all to blend our sensibilities of nurturance, love, guidance and protection. Using both heart and knowledge. Something, upon looking around me at my fellow parents, this generation seems pretty darn good at. No doubt a little well-placed and well-timed education here and there will help us through. An education that has been brought to the fore thanks to the conversation around that envelope-pushing TIME magazine cover. Here's to the ongoing discussion. Becoming louder not a moment too soon. 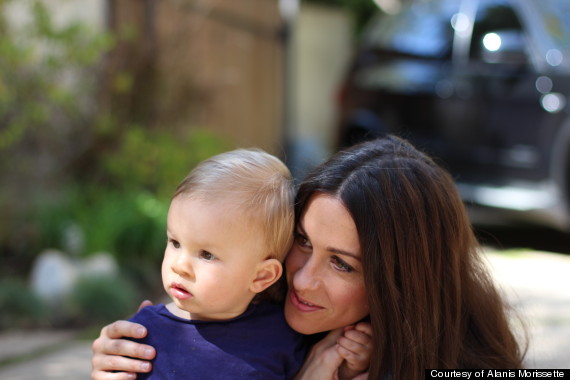 More:
Alanis MorissetteAttachment Parentingtime-breastfeeding-coverParentsmayim bialik
Newsletter Sign Up
Raise the kind of person you'd like to know
Subscribe to our parenting newsletter.
Successfully Subscribed!
Realness delivered to your inbox