JERUSALEM (AP) -- A Palestinian assailant rammed his car into a group of Israeli pedestrians near an Israeli police station in east Jerusalem on Friday, injuring four officers and a bystander, and lunged at security guards with a knife before being shot and wounded, the police said.

The attacker first plowed onto the curb next to an Israeli paramilitary border police station in east Jerusalem, hitting three border policewomen and lightly injuring them, Samri said. He then charged forward, hitting another policewoman and an Israeli man.

A border police officer and a security guard fired at the vehicle from the entrance to the station, she added.

The Palestinian then got out of the car and tried to attack the guards with a butcher's knife, she said. The guards fired and seriously wounded him, she said. The injured and the motorist were taken to hospital.

The attack took place at the same intersection where a Palestinian man rammed his car into a crowded train platform in November and then attacked people with an iron bar, killing one person and injuring 13.

Police identified the attacker as a Palestinian man in his twenties from east Jerusalem. Police say it is difficult to prevent such attacks, which appear to be carried out by "lone wolf" assailants who are not thought to be dispatched by a militant organization.

"The swift and determined response stopped the attack as it was beginning and prevented more innocents from being injured," said Moshe Edri, a regional police commander. 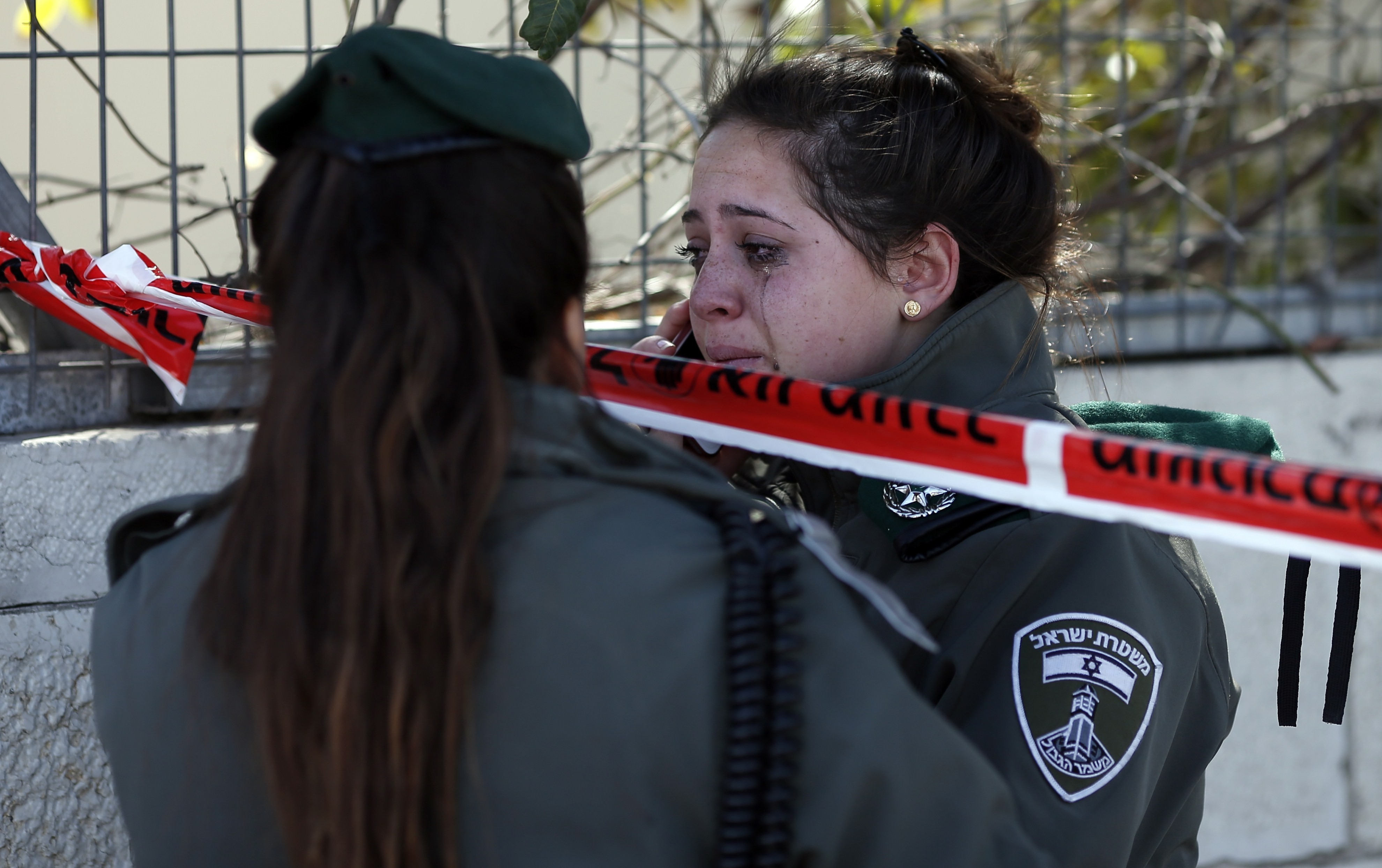 Police immediately cordoned off the area, and ultra-Orthodox Jewish onlookers gathered at the scene. The front of the car was smashed and the windshield was cracked. Israeli television showed footage of the wounded attacker lying on the ground before being taken to hospital.

The attack came as Israelis celebrate the Jewish holiday of Purim, a carnival-like holiday. Police said it was boosting security throughout the city, and Jerusalem mayor Nir Barkat said celebrations would carry on as usual.

"We will not let terror disrupt our daily routine, and we will fight it without compromise," said Jerusalem mayor Nir Barkat. "I invite all residents of the country to celebrate Purim in Jerusalem and to support it."

Friday's attack also mirrored a spate of similar assaults on Israelis involving cars late last year, in the same part of Jerusalem, over the city's most sensitive holy site, revered by Muslims as Noble Sanctuary and by Jews as the Temple Mount.

In late October, a Palestinian from east Jerusalem, who had served prison time for militant activities, slammed his car into a train platform in that part of the city, killing a baby girl and a young woman from Ecuador.

Two weeks later, a Palestinian man rammed his car into a crowded train platform in east Jerusalem and then attacked people with an iron bar, killing one person and injuring 13. Both attackers were shot by police and died of their wounds.

Since then, there had been a relative lull in tensions in the city, though last week, the mayor of Jerusalem and his bodyguard leapt from his car and apprehended an 18-year-old Palestinian after he stabbed an Israeli near City Hall, according to a statement from the mayor.