Just when you thought ISIS militants couldn't add anything more gruesome to their image, they proved us all wrong again on Tuesday when they targeted Prophet Mohammad's Mosque in Madinah. The Mosque (known in Arabic as al-Masjid al-Nabawi) is one of two holy shrines the kingdom hosts, and was one of three locations in Saudi Arabia targeted by terrorists on the same day.

Internal investigations are underway to reveal the identity of perpetrators and whether or not the attacks were coordinated. Until then, it is safe to say that all three cases carry ISIS-like fingerprints, both in terms of execution and motives.

More importantly, and contrary to what some may think, ISIS does declare the kingdom an enemy, and only a few weeks ago, an ISIS leader called upon his horrid clan worldwide to launch attacks against their foes throughout Ramadan (the Muslim holy month of fasting which concluded yesterday).

The first attack, which occurred near the American Consulate in the coastal city of Jeddah, may have not only been meant as a jab at the West; but had it not been prevented it would have definitely 'poisoned the water' between Saudi Arabia and the United States.

The second attack targeted two Shiite mosques in the Eastern province of Saudi Arabia. The Shiite sect are a minority in the kingdom and have previously had their own issues with the government. However, they (Shiites) are also a declared enemy of ISIS. As such, had this attack been successful it would have also managed achieve two things: kill Shiites while also creating tension between this minority and the government by making it seem as if they weren't properly protected by the kingdom's security forces. 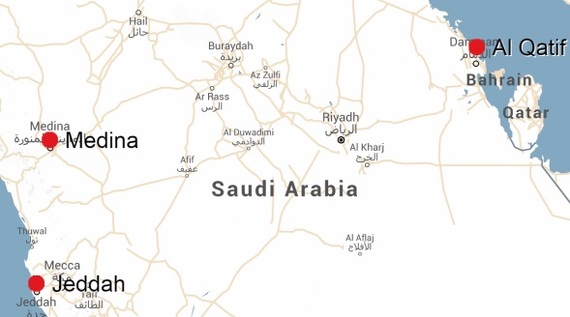 Google Maps: A map showing Jeddah, Qatif and Madinah - the three locations in Saudi Arabia targeted by terrorists on the same day.

A horrific scenario Yet, the most significant of all three attacks was definitely the attempt on the Prophet's Mosque in Madinah. There are no words that could describe the horrific impact this attack - had it been successful - both in terms of symbolic significance and the potential number of casualties.

So far, media reports have carried the following scenario: the bomber arrived to the mosque from the southern side during the sunset prayers (the time of breaking the Muslim fast). He was then stopped by Saudi security forces who informed him that he was attempting to enter a restricted area which is only meant to be used as an exit passage for the people praying inside the mosque.

Assuming that he (the bomber) was there to pray and break his fast, the officers offered him to join them for iftar. However, the bomber ran towards the mosque before he was stopped by the guards.

Surrounded with nowhere to run, the terrorist detonated the bomb killing himself and the officers whose bravery and sacrifice prevented the attack from harming tens of thousands of innocent worshipers.

Condemnation is not enough As expected, the Madinah attack resulted in a wave of solidarity and condemnation across the globe. However, just because it was foiled, we shouldn't simply move on or ignore its significance.

Indeed, this is an attack that - literally - targeted the heart of Islam itself. As such, it must serve as an eye-opener to any remaining ISIS sympathizers among us who may still believe that their evil creed has anything to do with humanity, let alone Islam.

And to those who are not ISIS sympathizers, but remain silent or indifferent... now is the time to speak up. Most definitely, if this horrid attack doesn't stir unprecedented worldwide protests, then we - Muslims - deserve to be called nothing less than 'hypocritical'.

Why do protests only occur only when 'the West' is perceived to have humiliated Islam with, for example, a Danish cartoon or by something as trivial a British school teacher innocently agreeing that her Muslim students call their teddy bear Mohammad?

Isn't an attack on a holy mosque which contains the prophet's resting place a far bigger insult to Islam? Or does an insult become acceptable if it the perpetrator was "one of us?" (Obviously, the answer is 'no')

However, it could also be argued that what is needed now is not anger nor protests. All we need is to apply and accept common sense; after all, it wouldn't be logical to believe that someone would attack the prophet... in the name of this same prophet!

*This blog was originally published in Al Arabiya News.