A short stroll before dinner last Thursday yielded a once-in-a-lifetime wildlife sighting -- along with the photos necessary to prove that it really happened.

The setting was Santa Rosa National Park, a stretch of tropical dry forest within Costa Rica's spectacular Area de Conservación Guanacaste. I set out from the Park's main administrative area shortly before 4:00 p.m. I hadn't gone more than a couple-hundred meters when I saw movement along the roadside. My first impression was of a large-ish cat dashing up a tree trunk, and I reached for my camera. But it was a fleeting vision, and large cats, although not exactly rare in this area, are rarely seen. When I looked up into the canopy, all I saw was a small troop of howler monkeys (Alouatta palliata). I figured it had been an illusion -- that I had merely startled a low-foraging monkey and tricked myself into thinking it was a big cat.

But it was a cat, specifically a puma (Puma concolor, a.k.a. cougar, a.k.a. mountain lion), and two seconds later it re-emerged, roughly 25 feet above the ground. I started taking pictures (with a 50-mm lens, all I had). The puma crossed above the road, traversing the narrow branches into a sturdy Bursera tree. There it maneuvered into a position above one of the monkeys. 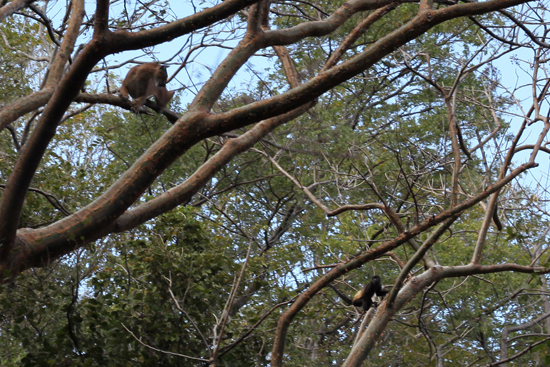 A short hop and a long leap later, the cat was within a meter or two: 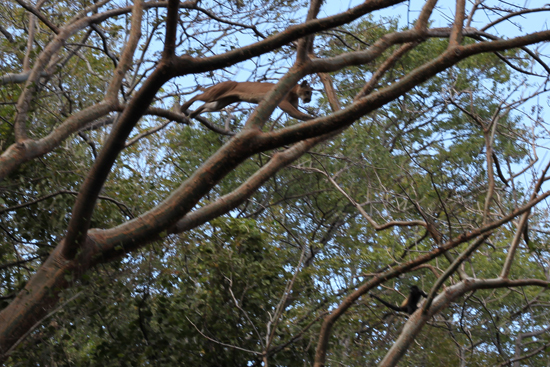 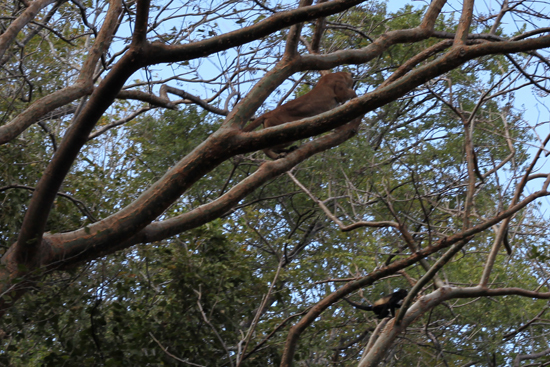 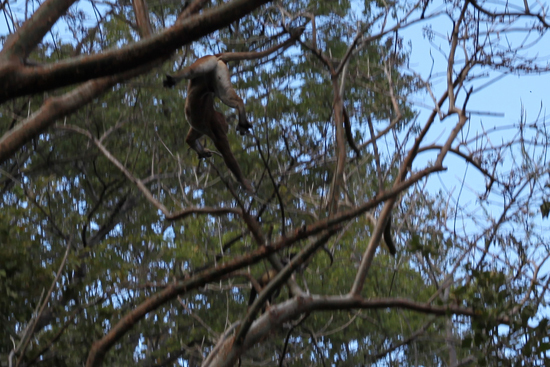 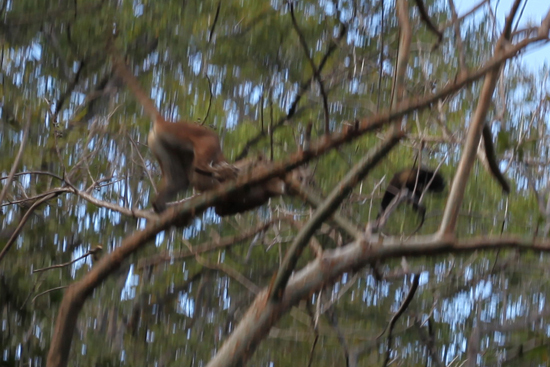 But that was as close as it got. The monkey scooted out to the end of the branch and into an adjacent tree, as the cat looked after it. 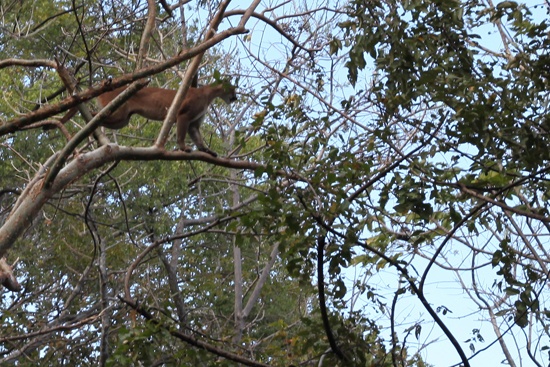 Then it looked at me. Then it clambered awkwardly down the tree and dashed into the forest. The entire hunt lasted a minute; the sequence of photographs here took place over just 11 seconds.

What to make of this encounter? To me, this seems like something only a very hungry cat would do: the likelihood of catching a monkey in the canopy in broad daylight is slim, and it's a risky move. Bursera simaruba is known colloquially as the "tourist tree" because its reddish, flaky bark is suggestive of a sunburn; this same feature makes the tree very slippery, and indeed, the puma almost fell several times. Moreover, pumas are predominantly terrestrial predators: one recent study found that only about 25% of prey items in puma scat on Panama's Barro Colorado Island (BCI) were arboreal, and most of those were slow-moving sloths. White-faced monkeys (Cebus capucinus) accounted for 5% of prey items in the BCI puma population, but howlers were not present. A 1979 study of the howlers on BCI ventured that "predation pressures on howler monkeys appear to be very light."

In fact, predation by big cats on Neotropical monkeys appears to be rare in general. A classic 1987 study of felid feeding ecology in the Peruvian Amazon examined 104 cat scats and found monkey remains in only six of them (none of them howlers). No monkeys were among the puma prey items found in three separate studies (1996, 2000, 2013) from a variety of forest types in Mexico. A single jaguar is thought to have wiped out a troop of six Venezuelan red howler monkeys in 1988, but this occurred under unusual circumstances: the monkeys were stranded on a 70-hectare island that had been created by the Lago Guri hydroelectric impoundment and took to sleeping in dead, defoliated trees, which may have increased their susceptibility to predation. Several people have uploaded video of puma finishing off a howler carcass in Costa Rica's Corcovado National Park, but that's about all you get from a Google search of "puma eating monkey." The scarcity of monkeys in puma diets is not because pumas are picky eaters -- they are on record depredating deer, peccaries, dogs, goats, armadillos, possums, raccoons, rodents, girls, boys, lizards, snakes, and turkeys, to name just a few. Rather, it is likely because monkeys are hard for big cats to catch.

Another curious aspect of this particular episode was its proximity to Santa Rosa National Park's administrative area, where there is a fair amount of human activity, along with a collection of semi-tame deer (a favored prey of pumas from Canada to South America). If preferred prey are so nearby, why take a moon shot on a scrawny monkey? Perhaps the puma was too shy to venture so far into human territory... yet bold enough to hunt in broad daylight along a well-traveled road? In North America, pumas occur amidst dense human populations; it's a bit hard to believe that a hungry animal would be too timid to snag a deer overnight what is effectively a tiny village with a dozen-or-so inhabitants. But one can only speculate.

Had an interesting mountain lion encounter? Leave a comment!