"This Is Am Yisrael!"

"This is Am Yisrael," she said, pointing to the enormous crowd.

Noa Litman whispered these words in my ears yesterday, in the midst of her daughter's wedding.

I couldn't believe it. Just days before, Rabbi Yaakov and Netanel Litman -- her husband and son - had been murdered by terrorists. Noa and her family were driving to a pre-wedding party. She had witnessed this murder and had been wounded.

Released from the hospital, she joined her children for the week of shiva and mourning; the wedding -- planned for that week - was postponed.

And now, here she was at the rescheduled wedding of her radiant daughter, Sara Techiya Litman. With dignity and courage, she was speaking to scores of guests, with a beaming smile, an attentive ear, and a receptive heart.

In defiance of those who seek to kill the Jewish spirit, the Litmans had asked the entire Jewish people to celebrate along with them. People flew in from the United States, Europe and all over the world to dance with the bride and groom. I had flown in from Scottsdale to do my part in the mitzvah of celebrating along with them.

This wedding - the bride, Sara Techiya Litman, her groom, Ariel Bigle, their respective families, and the thousands of guests - speaks to the unwavering resolve at the heart of our nation, Israel. Indeed, we are a nation that believes, without a hiccup of hesitation, that life is more powerful than death, that love is mightier than hate, that hope is greater than despair, and that light is stronger than darkness. We are a nation that has forever been loyal to its purpose of "being a kingdom of priests" and "a light unto the nations." In spite of violent opposition throughout our long history, we are a nation that has lived by the words of the Haggadah: "in each and every generation, they rise against us to annihilate us, but the Holy One Blessed Be He saves us from their hand."

The ceremony began with joyous singing and dancing. The bride and the groom approached one another with a palpable intensity of emotion. The world stood still. 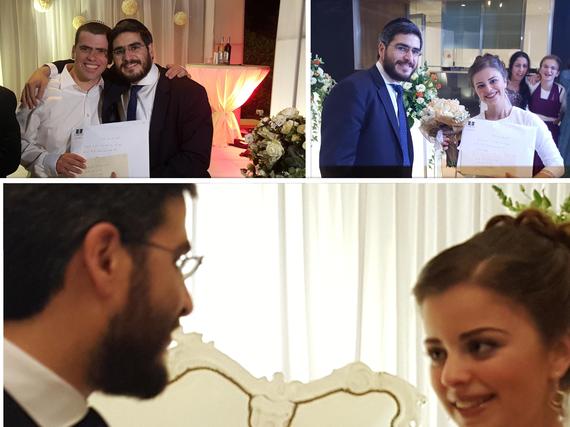 This crescendo of emotions reached a personal climax when I fell into the warm embrace of the groom's arms, and when the bride greeted me with a glowing face. They asked me to relay this message: "Tell your community in Arizona, and all Jews in America, that we thank them and love them from the depths of our hearts. Tell them that we are one, and since we share the same collective soul, no one can ever separate us. We promise to do our part to nurture our small part of this collective Jewish soul, but we ask everyone in your community and beyond, to nurture their individual parts of our collective soul too. We ask each and all to engage themselves in Jewish life, now, more than ever; to take ownership of their Jewish identity, proudly; to add more Torah, Mitzvot and good deeds to our broken world."

I came to celebrate with the Litmans, but I left having learned two life-changing lessons:

Lesson One: Thinking of Others

Here was a couple that found the courage to celebrate after sudden and unimaginable tragedy. They found a way to transform sorrow into joy, tears into triumph, and death into life.

How could they be so brave? It may be because they were not focused on their own needs. Were they experiencing unimaginable pain? Sure. Were they tempted to fall into melancholy and depression? No doubt. But they believed that they were born to be bastions of hope and beacons of light for their families, and so unexpectedly, for our nation too. They knew that our nation needs them to "nurture their part of the Jewish soul." And they knew that they needed to convey a message to my community and beyond, in order to empower us to partner with them in bettering the world.

Every day we have the chance to touch someone's life, to serve, to comfort, to listen, to smile. At any moment, we can fulfill the purpose for which we were born and fulfill the calling of our souls. Yet how often do we overlook what is in front of us? How often do we ignore the cries of our those who are yearning for support and direction? How often do we say that it's too tough to change the world?

During the chupah, a speaker evoked the Talmudic statement: "Our father Yaakov, Jacob, did not die. As his descendants are alive, so too he is alive." He was referring, of course, to the bride's father, whose name is also Yaakov. Although he had been ruthlessly murdered just days before, he too was still alive, in his children and their spouses, and through their mitzvot and kindness.

Sara Techiya and Ariel, the bride and groom, were right. They are doing their part in nurturing, and illuminating their souls. But we too must do our part to keep Jacob our forefather, the bride's father, Rabbi Yaakov Litman, and our fathers and mothers of all generations, alive and well.

Now it is up to us to nurture the individual parts of our united Jewish soul. Let us take upon ourselves a new mitzvah, and ignite a light of goodness today, in our lives, and in our world, one soul-part at a time, one mitzvah at a time.

Our nation, our very "Am Yisrael", will then undoubtedly remain alive and robust. To eternity.