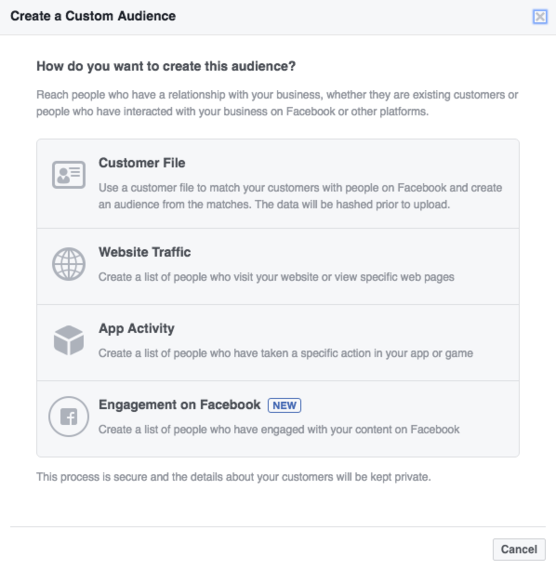 Meet the new Facebook custom audience feature: Engagement on Facebook. Now, advertisers can build audiences based on who watches their videos.

Here are your engagement options when creating your custom audience. Lots of choices.

Depending on the kind of business you run, this new custom audience feature could be a big deal for you. Let's look at some of the ways your business could benefit:

You can optimize better for conversions: Let's say you have a new product or service. It's a little tough to explain to customers, so you create a video about it to walk people through why it's great and how it can help them. You know that without this explanation, someone is considerably less likely to respond to a straight call-to-action Facebook image ad. So, instead of launching the video ad first and then the call-to-actions later -- assuming that you're creating a sequential funnel towards a purchase and hoping that people see these ads in order -- you can actually ensure that you're creating an airtight pathway by only targeting those call-to-action image ads at people who have already seen your video.

You can create an ongoing dialogue: Let's say you make a viral video, and it does nicely. It gets shared a lot, and people like it. You picked up you fair share of page likes because of it, but you want to do a final sweep and make sure you touch all the people who enjoyed it but didn't take the additional action of liking your page.

Prior to this feature, you would have a tough time finding them. And, if you did, you'd probably reach them with a more generic ad because you'd be reaching lots of people who hadn't seen your viral video, and you wouldn't want to confuse those people.

Now, that's no longer a concern. You create a custom audience of people who have seen your viral video, and then create a page likes campaign (excluding those who already have liked your page). Knowing that you're talking to such a narrow group means that you can be more specific with your ad. You can reference the viral video in your ad, and now you have an inside joke with the person who sees the ad. This extended dialogue helps create a stronger relationship than a generic ad -- and it's all because you can now find these people and isolate them.

Facebook continues to improve their ad platform by leaps and bounds, keeping it far more robust and powerful than anything not done by Google. With more powerful, more specific forms of targeting, you can make your ads more specific and relevant to the people who see them. That means a better experience for them and a better experience for your brand.