What happens when a woman doesn't use her voice to express herself fully? I have been thinking a lot about this question lately, and have been struggling with using my own voice in a way that feels aligned with the bigger picture that I feel inside of me. For those who know me, you might think this sounds silly since I am expressing myself all of the time - through writing, social media, and basically living life as a "talker." But the reality is that I feel there is so much more inside of me not being expressed ... and I wonder how many other women are going through this same thing? 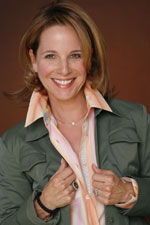 I spoke recently on this topic with Marcy Cole, Ph.D., a licensed clinical social worker in private practice in Los Angeles. Marcy is also the Executive Director of First Tuesday USA, a women's group dedicated to creating a community of extraordinary women through social connectivity, professional networking and social service. I met Marcy through First Tuesday, and recently asked her if I could to tap into her expertise as a psychotherapist to learn more about what keeps us, as women, from expressing ourselves fully. Why are we blocked?

Marcy told me that she sees two primary common blocks: First, she says, we are blocked because we are disconnected from who we are. "As women, if we have not yet come to know, appreciate and love ourselves, it is impossible to truly access our authentic voice and determine what we are here to share with the world," says Marcy. Second, according to Marcy, is that for many women the locus of control is "other-directed" versus "self-directed." "When the focus is on pleasing others in order to gain acceptance and affection, there is a consequential fear of losing admiration, respect, and ultimately love if we do express our truth," she says.

But why are we, as women, so focused on the "other?" Are men also hung up on what others think? 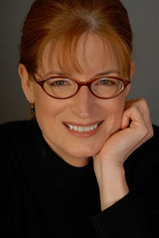 According to Louann Brizendine, M.D., a neurobiologist and psychiatrist at the University of California, our distinct female biology provides an explanation of why we are so focused on the "other." In her bestselling book, The Female Brain, she examines the roots of female brain development. "Baby girls are born interested in emotional expression. They take meaning about themselves from a look, a touch, every reaction from the people they come into contact with. From these cues they decide whether they are worthy, loveable or annoying," she says. In her book, Dr. Brizendine points that compared to the male brain, the female brain has a larger communication center and a larger area for processing emotion and reading social cues. In short, the female brain is wired to value communication, connection, emotional sensitivity, and responsiveness more than the male brain.

"Whether or not she is being listened to will tell a young girl if others take her seriously, which in turn goes to the growth of her sense of a successful self. If she does not connect, her sense is of an unsuccessful self," says Dr. Brizendine. 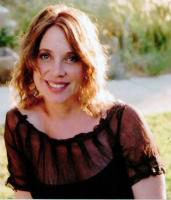 In an interview with Catherine DeMonte, LMFT, a licensed marriage, family and child therapist in Calabasas, CA, I learned more about what holds women back from expressing ourselves. In her work, she has found a common theme that when women shared their voice and their gifts as young girls, they were often told they were "bratty" or "showing off." Sound familiar? Catherine explained that this was often internalized as, "If you don't want to hear from me, then I'll just be quiet."

She has found that men, on the other hand, more commonly took a different attitude in response to being criticized as boys. Instead of getting quiet, they got loud. "Men tend to act out, and women tend to go in," says Catherine, who also leads a women's group called "Women Living Fully Out," to help women fully express themselves.

I ran across a video recently on Facebook that shows very clearly one reason why it is so important express ourselves. Did you know that in order to be polite and be a "good girl" many women never question a doctor's advice or get a second medical opinion when surgery is recommended? The result of this is not always so nice. Check out the video here. 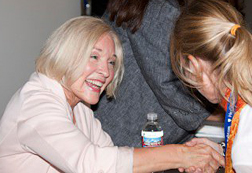 Along with surgical risks, if a woman does not express herself fully, there can be mental and emotional health repercussions ... later leading to physical disease. "Many illnesses are quite simply the end result of emotions that have been stuffed, unacknowledged, and unexperienced for years," says Christiane Northrup, M.D., specialist in women's health and author of Women's Bodies, Women's Wisdom. "Unexpressed emotions tend to 'stay' in the body like small ticking time bombs," she says. "They are illnesses in incubation."

In addition to our own health risks, there may be planetary consequences as well. As Dr. Cole puts it: "Women are natural nurturers, healers, intuitives, creators, visionaries, and peace makers. When we dis-empower ourselves by withholding our voices, we ignore the call for feminine leadership that is absolutely crucial for this planet at this time."

While we may feel it is risky to speak our truth for fear of being mocked, rejected, or ostracized, there may be some more serious risks on the table if we insist on remaining the polite "good girl."