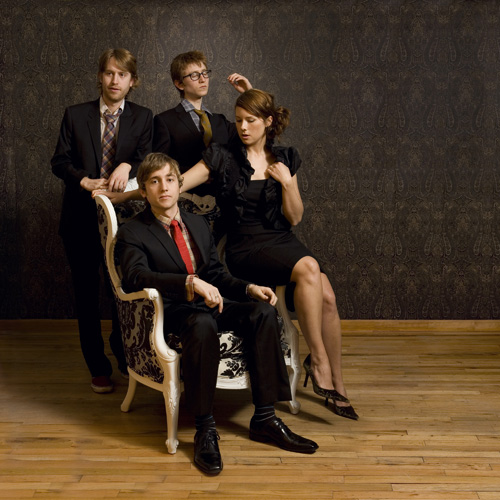 "God Bless America" is a phrase so overloaded and overused that it rarely escapes cliché - unless, of course, it's delivered by a bellowing Joe Biden, his voice pitched to melodious perfection and backed up by a chorus of "Hey!"s, as he appears to fly through a glittering, purple starcloud.

That peps it up a bit.

Moments like these are why people love Auto-Tune the News, the Webby-award winning Youtube series that remixes news clips, adding music and tweaking the speakers' audio with pitch correction -a.k.a "auto-tune" - software, to hilarious effect.

ATTN is the mutant-media brainchild of the Gregory Brothers, a creative entity consisting of brothers Michael, Evan and Andrew Gregory and Sarah Gregory, who's married to Evan. The brothers are originally from Virginia ("Appa-latch-a," quips Michael) and Sarah Gregory is from Texas. All are now based in Brooklyn, NY.

Although the project started out during the 2008 Presidential debates, the group's motivation wasn't principally political.

The Gregories are first and foremost musicians and, from the start, says Michael Gregory, Auto-Tune the News was "an excuse to make music." An audio engineer and producer, Michael had experimented with auto-tuning some videos, which lead to a gig contributing music and songs to the Obama Girl series on BarelyPolitical.com. Auto-Tune the News began a few months later.

Creatively the project allowed the Gregories the opportunity to collaborate, not just with each other, but with a host of politicians and media personalities, who the Gregories refer to as Unintentional or Accidental Singers.

"It's functionally nearly the same as if you were working with a co-songwriter who happened to be remote from you," says Evan Gregory of the unintentional collaboration at the heart of ATTN. "The Postal Service is an example, where these two artists don't even meet face to face but they make something great."

"We just happen to have lyricists named Sarah Palin and Joe Biden."

When it comes to auto-tuneability not all public figures are created equal, so it's no accident which accidental singers make the cut.

As the most celebrated orator of the day, you would think that President Obama would be a good source, but he rarely appears in ATTN videos, while Katie Couric is a regular player and Vice President Joe Biden is basically part of the house band.

"His delivery puts Obama to shame. When we try to auto-tune Obama...every single one of his sentences he sort of finishes "down," says Andrew in a low voice. "Where Biden really has this soaring, almost lyrical quality to the way he delivers a speech."

"It's easier to rhyme when you're inspired", says Evan simply.

The president, say the Gregories, has also become less fiery now that he's out of campaign mode and is often simply too rational to provide good dramatic material.

Much of what the group hones in on belongs to what Michael calls the "white noise...'get angry!'" genre of political discourse. As a result, the Gregories estimate that probably 80% of the material they use (congressmen shouting about turtle fences and the dangers of smoking lettuce, for example) is already funny by itself.

But it's when the Gregories rework these silly moments that that silliness really shines.

"There's some news that is absurd to a state that we feel like we need to put it to music," explains Sarah Gregory. "Sort of dramatize it in a way."

Along with auto-tuning the voices of their unwitting participants, the group achieves that drama by adding catchy melodies, smart lyrics, and by using a green screen to insert a cast of recurring, oddball characters in strange hats that the Gregories play themselves. The effect is zany and unhinged and therefore hits the already batty pitch of the news just right - from the laughable metaphors to the parroted sound bytes.

As for who does what: "Andrew does most of the cooking", says Evan, deadpan. And "Sarah does a lot of tidying", says Andrew. "She tidies a lot."

When not turkey basting or bed making the Gregories scour blogs like the Huffington Post and other news aggregators, follow tips from fans, collaborate on writing the songs, match up the audio and, finally, shoot the video - adding themselves to the mix.

"Honestly the shooting is probably the shortest and the funnest part", says Andrew. "Because then almost everything is done and we get together, drink a couple of beers and eat some tacos and get in front of the green screen." (For a behind-the-scenes look at how an episode of ATTN gets made, see here. )

Overall, say the Gregories, it's been a "bizarre...surreal year." They've appeared on C-SPAN, CNN, MSNBC, FOX and NPR, sometimes alongside the very people they've featured in their videos. The exposure has brought new opportunities for collaboration and widened the audience for their various musical projects. And the response has been hugely positive, even from the politicians and news anchors being auto-tuned. To wit, Katie Couric herself told Leno how much she liked the videos and, in perhaps the most surreal moment thus far, the Prime Minister of Sweden, Fredrik Reinfeldt, was asked to respond to his appearance in one of their videos - which he did.

"I think they just love seeing themselves sound as smooth as R.Kelly," suggests Michael.

But in earnestness, says, Andrew, he's been amazed by the scale, seriousness and genuine goodwill of the response generated " - just because of this dumb thing we started doing in our bedroom."

And why not? Auto-Tune the News is entertaining, to be sure, but it's also wickedly smart - a multi-fanged satire tempered with musical joy. The videos are witty constructions of layered irony that spoof politics, the media and the manic intersection of the two, all with hooks that replay themselves in your mind. The idea of politics as performance is both spotlighted and lampooned. Average political showmen are given the studio treatment, transformed into momentary pop stars, and revealed as the performers that they are.

Auto-Tune the News essentially remixes the media echo chamber with some choice bits of insanity thrown in. But for all the zaniness and energy, in the end it's more about creating clarity than chaos. By pointing out the dunces, the cheerleaders and the parrots in the daily jumble, ATTN is a method of cutting through the madness.

In a sense, by adding and tweaking sounds Auto-Tune the News actually reduces the political noise that is its subject.

Sarah Gregory likes to recall the story of a time during which Michael had been using auto-tune so constantly that he began to hear the world around him auto-tuned - "as a sort of symphony."

"In my mind, that's kind of why I like Auto-Tune the News", says Sarah. "Because the media and politics can become a bit of a cacophony and it's an interesting challenge to make something cohesive out of all of those moving parts."

"And if it sounds good and makes you want to dance, then even better."

For more from the Gregories check out their latest effort: an auto-tuned version of the "Double Rainbow" video.