I haven't even cracked open my brand-new copy of Go Set a Watchman. But already I've got opinions.

For months now, I've been looking forward to taking a look at the long-lost book that was the original version of Harper Lee's famous, much-loved, much-read best-seller, To Kill a Mockingbird

I wasn't planning to rush out to buy it. Maybe I'd wait to get it at the library. But sooner or later I'd get my hands on a copy and study it for what it could tell me about this famous writer's creative process.

I was wondering, what made Harper Lee put aside this original manuscript and rewrite it as To Kill a Mockingbird? Was the writing inferior in the original version? 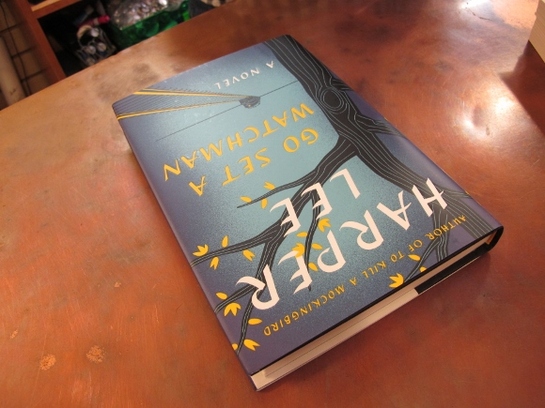 At the bookstore: my brand-new, as yet unread copy of Watchman. Barbara Newhall photo

Was the plot not working? Did the characters not come alive? I assumed that the problem with Go Set a Watchman was a craft problem.

Turns out, if reviewers like Michiko Kakutani of the New York Times are correct, the problem with Go Set a Watchman was not a craft problem. It was a theme problem -- a theme problem embodied in the character of Atticus Finch.

In Mockingbird, Finch is the heroic, sensitive, forward-looking attorney, adored by his young children, who comes to the defense of a black man standing trial for rape.

In Watchman, Atticus is a southern bigot who lets loose with hate speech. When his daughter, the grown-up Scout, comes home from New York, she is distressed to learn that her beloved father has attended a Klan meeting.

Kakutani asks: "How did a distressing narrative filled with characters spouting hate speech . . . mutate into a redemptive novel associated with the civil rights movement, hailed, in the words of the former civil rights activist and congressman Andrew Young, for giving us 'a sense of emerging humanism and decency'"?

I ask: Why was a bigoted person transformed into a larger-than-life hero? Why did Watchman become an - idealized? - story about an idealistic man?

Maybe because a good, well written story with a heavy shot of idealism is what was needed in civil rights era 1960.

According to Times writer Jonathan Mahler, that idealistic story is the one that Harper Lee elected to tell under the guidance - influence? -- of her motherly, strong-willed editor, Tay Hohoff.

But now maybe we - by we I mean the American zeitgeist - maybe we are ready for a different story.

I'm thinking about the families and church friends of the nine parishioners murdered at the Emanuel African Methodist Episcopal Church, aka Mother Emanuel, in South Carolina last month.

Miraculously, they found themselves capable of forgiving their loved ones' killer. Their open-heartedness set off a chain reaction of open-heartedness around the country - leading to President Obama's stirring June 26 eulogy at Emanuel AME and the South Carolina legislature's decision to take down the Confederate battle flag.

It's not 1960 anymore. It's 2015. The events in South Carolina point out that perhaps we are ready to feel a heavy shot of compassion for the pain and fear that the "bigots" in our midst are feeling.

Kakutani puts it this way: "'Mockingbird' suggested that we should have compassion for outsiders like Boo and Tom Robinson, while 'Watchman' asks us to have understanding for a bigoted person named Atticus."

But wait, I'm not done here. I've got one more preconceived idea - question - about Watchman to put out there: Under a different editor, with different proclivities, might Watchman have become a different story entirely, maybe an even better one?

In the process of cleaning up the Atticus character and making him presentable - and, yes, inspiring -- to high school English classes everywhere, wasn't another, equally poignant (but possibly more nuanced) story lost: The painful story of a young woman who goes home to her beloved father to find he has feet of clay?

Let's see what happens when I actually read the book. No doubt some more opinions will rear their feisty heads.

If you enjoyed this post, you might like "Do Books Have Rights? This One Didn't. I Threw It in the Trash." Also, "Beat Your Dog, Spank Your Kid, Go to Heaven."