If they care about creating jobs, driving economic growth and saving consumers' money, here's one industry our elected officials in Washington and beyond should support:

Nearly 1.9 million Americans now work in energy efficiency in America. A new analysis (read it here) by business group E2 (Environmental Entrepreneurs) and energy efficiency group E4TheFuture yields some surprising details about the size and breadth of that workforce.

Employment in energy efficiency is bigger than solar, wind or other clean energy fields. It's bigger than sectors like real estate and food manufacturing. Energy efficiency companies now employ about 10 times as many Americans as the oil and gas extraction business and nearly 30 times more Americans than the coal mining industry.

In fact, HVAC (heating, ventilation and air conditioning) companies that are a staple of every city and community in America employ about 629,000 workers who spent at least a portion of their time working on energy efficiency systems, according to the analysis.That makes HVAC companies the biggest sector for workers in energy efficiency related jobs.

Efficient lighting companies employ about 327,500 Americans, while about 292,000 Americans work in advanced materials and insulation jobs.

And those Energy Star appliances we all have or want in our kitchens? About 162,000 Americans go to work each and every day in factories and businesses across the country to make them and get them to market. 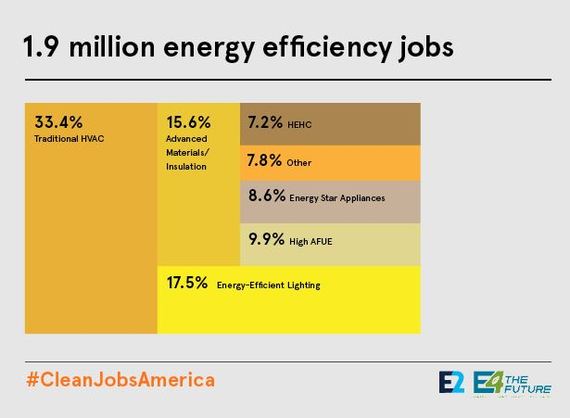 Energy Efficiency Jobs America is based on a detailed analysis of U.S. Bureau of Labor Statistics data and responses from more than 20,000 U.S. companies surveyed in late 2015 by researcher BW Research Partnership.

While helping to quantify the burgeoning energy efficiency industry in America for the first time at this level, the analysis also reveals something else:

Other states, including Florida, Texas and Georgia, also are in the Top 10 for energy efficiency jobs, but mainly because of their size and the fact that their hot summers demand more HVAC workers.
For the most part, though, the only thing stopping any states from creating more energy efficiency jobs is inaction by their elected officials to pass smart energy policies.

Here are three areas where they can start:

*State and local governments could strengthen building codes to encourage more energy efficiency and the jobs that come with it -- something Illinois does well.

*State utility commissions could encourage utilities to start or expand conservation and energy efficiency programs for consumers and businesses. That's something California, Massachusetts and other states do.

*States could prioritize energy efficiency in developing and/or strengthening their clean energy standards, something Massachusetts does.

But what about on a bigger scale that will benefit our entire country with more jobs and lower energy bills?

That's where the federal government comes in.

It was great when President-elect Trump recently pushed to save jobs at a Carrier air conditioner plant in Indiana, in part by guaranteeing corporate tax breaks. 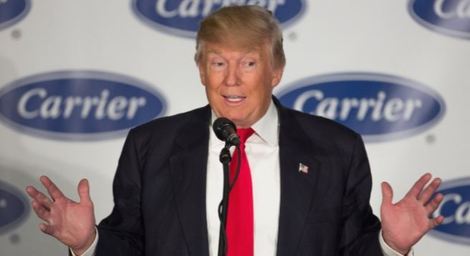 But imagine how many energy-related jobs we could create if we took action to encourage energy efficiency at a national level.

Upholding important policies like the Paris climate agreement and the federal Clean Power Plan, for starters, would encourage utilities and big businesses alike to invest in technologies that save energy and protect their bottom lines. After all, the best way to reduce energy costs is to buy less energy.djusting tax codes surrounding depreciation for HVAC systems and other energy-related equipment in big buildings could spur more sales of more efficient equipment.

And simply seeing energy efficiency policies for what they can do -- create jobs, save money and drive economic growth -- would be a simple but commonsense step in the right direction for the Trump Administration and Congress.

Let's hope our new leadership in Washington and beyond recognizes the importance of the energy efficiency industry and the policies that support them.

About 1.9 million American workers -- and anybody who pays a power bill -- are depending on them.