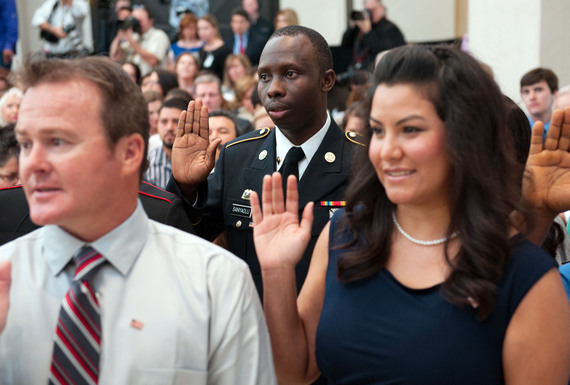 By Margaret Spellings and Javier Palomarez

We can all be glad that unemployment recently fell to 5.4 percent. But the reality is that consistent economic growth remains elusive.

Fortunately, the country has an untapped source of economic growth potential, and that is the many creative, industrious and motivated immigrants in our country. The United States has historically remained one of the world's top economies in large part because it has been able to attract diverse people from around the globe, reaping the benefits of their talent and hard work.

But, too often in today's political climate, immigration is cast as a negative, with issues like border security and unauthorized immigration dominating the news cycle. While we acknowledge the importance of those issues, they are only a part of the broader immigration question. After all, our immigrant population is one of the most promising solutions for our country's tepid economic growth.

Business start-ups are essential for economic growth. By turning good ideas into products ready for the marketplace, entrepreneurs drive the economy forward. For example, in 2012, immigrant-founded major engineering and technology firms generated more than $63 billion in sales and employed more than 500,000 workers.

Overall, approximately 20 percent of small businesses in the U.S. are immigrant-owned and these enterprises employ one out of every 10 American workers.

The U.S. Census Bureau shows that in 2013 immigrants accounted for 13 percent of the total U.S. population, but more than 16 percent of the labor force. And more than 61 percent of immigrants over the age of 16 were employed in 2013, a higher proportion than that of native-born Americans.

Even more remarkable is the role immigrants will play in expanding the future workforce. The Pew Research Center projects that between 2012 and 2050, immigrants and their U.S.-born children will combine to account for 93 percent of the total growth of America's working age population. With America's workforce aging and Baby Boomers approaching retirement, an influx of immigrants should be welcomed, particularly since many come to the United States during their prime working years.

Third, immigrants are a major source of the new ideas and patents that boost productivity.

Quantifying innovation within an economy can be difficult, but one of the most common methods is to examine patent data. The U.S. Patent and Trademark Office reports immigrants or other foreigners are responsible for more than 50 percent of the patents its office grants.

Among the 10 U.S. universities that received the most patents in 2011, 76 percent of all such patent awards had at least one immigrant listed as an inventor on the patent application. And among college graduates, immigrants are likelier than their native-born counterparts to have ever published a book, journal article, or conference paper.

Admittedly, the immigration debate is highly complex, with many different sides to consider. Often, though, only the dark side of the issue captures headlines. But by starting new businesses, expanding the workforce, and driving innovation, immigrants grow our nation's economy and employ untold Americans in the process.

This is the other side of the story, one that the George W. Bush Institute and the U.S. Hispanic Chamber of Commerce are pleased to tell in their new publication: America's Advantage: A Handbook on Immigration and Economic Growth. This book tells how immigration buoys economic growth.

Margaret Spellings is President of the George W. Bush Presidential Center and Javier Palomarez is President and CEO of the U.S. Hispanic Chamber of Commerce.