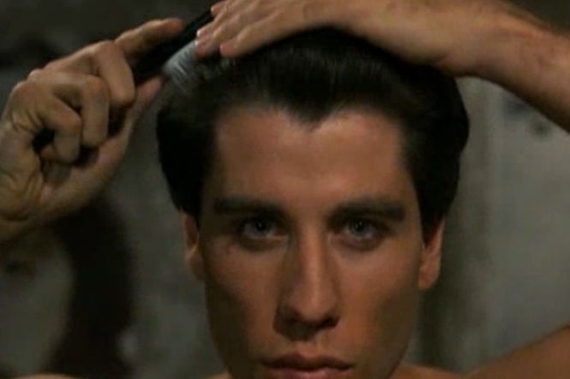 Reader's Note #1: The following post is about yet one more expensive blob of scientific research. To the question "What do women really want?" some men will answer "Money," others will answer "Who the hell knows?" and those of a more prurient bent will answer "Seven inches or more."

Reader's Note #2: Life in the Boomer Lane recently posted a commentary on "The Universal Hot/Crazy Matrix: A Man's Guide to Women." She has noticed since then that this remains far and away her most popular post to date, indicating to her either a serious interest on men's part to understand women or a serious belief that hot women are crazy. This post may serve to demystify.

Here goes with the post: A study published in Personality and Social Psychology Bulletin recently found that while men were attracted to nice-seeming women upon meeting them, women did not feel the same way about men. Researchers from the University of Rochester, the University of Illinois at Urbana-Champaign and the Interdisciplinary Center (IDC) Herzliya in Israel investigated a possible mechanism explaining why women and men differ in their sexual reactions with receptive opposite-sex strangers.

Let us stop here for a moment and remind ourselves that throughout time, many women have been attracted to "the Bad Boy." This Bad Boy is personified by the motorcycle-riding high school dropout who has more tattoos than brain cells. Movies like "Dirty Dancing," "Saturday Night Fever," and "The Wild One" glorify their own versions of Bad Boys. The pattern is similar: Bad Boy (actually more confused/misguided/pitiful than bad) is hot/really hot/really hot and a great dancer. Nice girl falls in love with him, discovering in the end that his flaws are too much to handle. She goes back to wherever she came from and marries a Jewish dentist. Now back to the research:

One hundred and twelve undergraduate students were split evenly between men and women, and participants were paired randomly with an opposite-sex individual they hadn't met before. The study examined burgeoning sexual interest and the participants' feelings on the possibility of long-term dating with their new "partners," and how those connected to their perceptions of a personality trait the study calls "responsiveness." As the lead researcher put it, "Sexual desire thrives on rising intimacy and being responsive is one of the best ways to instill this elusive sensation over time."

But what the researchers found was pretty darn surprising (to them). Men found responsive women more feminine and attractive. When women encountered a responsive man, they were less attracted to that person. Let's bring this down to a more basic level for those readers who are eating a bacon cheeseburger while they are reading this: In an initial encounter, men liked nice women. Women thought nice men were blah.

The second study required participants to engage with either a responsive or unresponsive person of the opposite sex, then interact with them online while detailing a current problem in their life. The goal here was to remove the potentially confounding elements of live social interaction (smiling, physical attractiveness) to see if they could isolate how much responsiveness -- or niceness -- played into attraction.

Again, the men in the study thought responsive and attentive women were more attractive as potential partners, while women found men with those same traits to be something yucky they stepped in and it stuck to the bottom of their shoes.

The third and final study presented in the paper sought to test specifically whether the mechanism by which "responsiveness" motivated individuals to pursue relationships was, in fact, sexual arousal. To do so, they replicated the second study, but added a specific measure of sexual attraction. They then found that when men found women to be responsive, it led to a heightened sexual arousal among men. That, in turn led to greater desire for a relationship. Same result: Men found responsiveness to be sexually desirable. Women kept their panties firmly in place.

Researchers are still unsure why women are less sexually attracted to responsive strangers than men. They have theories. LBL scoffs at the theories.

LBL can save these researchers a lot of time and trouble. She has her own theory as to why many women are attracted to bad/elusive/unapproachable men. It's simple. The ultimate coup isn't getting a nice, sweet guy to like you. He likes everyone, right? The brass ring is getting someone to like you who is not available or approachable. He rides in on a motorcycle or walks in wearing a wedding band or isn't taking his meds. He's scary and dangerous and exactly what mom warned us about. And we go right there. The goal, of course, is that he will fall in love with us and stop riding the bike or wearing the wedding band or will start taking his meds. In other words, we will change him to become more like the men we weren't attracted to in the first place.

Most women realize before too long that perhaps the Bad Boy wasn't such a good idea after all, and they end up with the Good Man. Others make a career chasing after the Bad Boy, usually with predictable results. A small number end up with the Bad Boy, who really does have a heart of gold, and somehow the relationship works. A very, very small number. In Hollywood and in real life, these Bad Boys who make good do so because they finally reach an age in which they are simply too tired to continue doing what they have been doing. Settling down becomes all they are capable of. Congrats on the marriage, George Clooney.

The answer to the question "What do women really want?" is that, ultimately, we all want to be loved and valued. We just may take different paths to get there or never get there. If we aren't lucky, we might fall off a lot of motorcycles in the process. If we are, we might become really swell dancers.

PHOTO GALLERY
Readers Advice On How To Have A Long Marriage
Download
Calling all HuffPost superfans!
Sign up for membership to become a founding member and help shape HuffPost's next chapter
Join HuffPost
Follow Renee Fisher on Twitter: www.twitter.com/dcboomerhumor

What Do Women Really Want In A Relationship?
Readers Advice On How To Have A Long Marriage 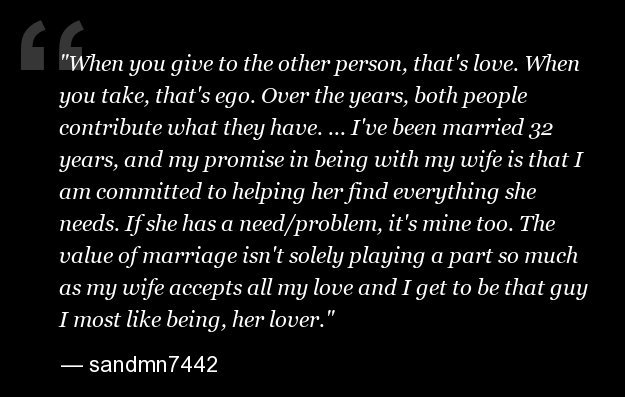