AT&T has lost about 9% of their total customers in the Delray Beach, Florida, 'IP Transition Trial' in about a year and three months. These are customers who had a working AT&T service and who disconnected it and said -- goodbye to AT&T.

And in the second IP Transition Trial taking place in the rural area of Carbon Hill, Alabama, AT&T now says that after 1+ years of trying, they are at "Phase Zero".

So much for a 'fabulous' techno-future.

What are the AT&T IP Transition Trials all about?

AT&T and others claim that the 'IP Transition' is to move America to advanced technology, Internet-Protocol-based services, and AT&T filed with the FCC to do two trials; one in Delray Beach, Florida and the second in Carbon Hill, Alabama.

However, the secret is out -- According to the most recent AT&T IP Transition Trial report for 3rd quarter, 2015, (released January 19th, 2016), customers, it appears, just aren't drinking the Kool Aid to drop their current landline service to get inferior services, couched as a 'technology change', such as AT&T's wireless "Home Phone Service".

The trial in Florida is being done, according to AT&T, to focus on whether seniors would accept this technology change. In a separate document called "Materiality Assessment Topic: Deployment for rural and underserved areas | Global Reporting Initiative G4 Indicators", AT&T writes:

But this has nothing to do with age. The Daily Mountain Eagle's article, November 2015, (the link on the AT&T site doesn't work) quotes AT&T, pertaining to the trial going on in this rural area, and AT&T actually said that this project is now at 'Phase 0' -- i.e., nobody cares and throwing money at it still didn't work. The article quotes AT&T's Director of Regional and External Affairs, Terri Williams, at a town meeting:

"Since we've come and addressed the council, we've talked with several leaders, citizens and business leaders trying to make sure we know the community before we start working on, what we're calling, our trial for Carbon Hill to be the example of rural America for when we start changing how we do business with our phone services... So, I just want to give an update. In the past month, we've had a meeting with the FCC, and that was one of the things we were really talking about, different phases of this trial and how it would work. Well, we're officially in phase 0, which is what they're calling it, so we're still in an education mode where we're going around the community and talking about what services people are having and using, and finding and identifying any problems." (Emphasis added)

Did AT&T actually tell the FCC that this was officially "Phase 0"? I couldn't find any references to that.

And AT&T's report claims that this test is to address concerns of affordable IP services in "a predominately rural area with a significant low-income population".

Yet, after a valiant attempt to throw money and resources to make people like these IP services, it may be that AT&T is throwing in the towel - or should, if it hasn't.

I say this because the web sites for the trials in Carbon Hill and Delray Beach are now growing stale, (as of January 31st, 2016). In Carbon Hill, the only 'tweets' are from the Executive Director of Alabama Cable Telecommunications Association, (which doesn't even have a working web site, but I assume it has AT&T as a member and is funding some/most of the group), and the president of AT&T Alabama, with the last tweet on December 1, 2015. And the last tweet in Delray Beach is August 6th, 2015 from an AT&T Public Affairs guy in Florida.

AT&T's Half-Truth about their IP Transition

In the 3rd quarter report for 2015, AT&T still keeps a smiley face and decided to goose the accounting. According to this detail in the FCC filing, after 1 year and three months, the IP accounts grew 26%, which, according to the FCC filing, is more than the company 'lost' in basic phone service, (TDM accounts), which is down 23%. 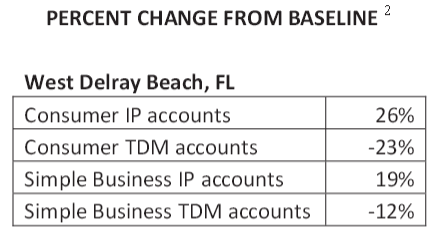 Except AT&T has manipulated the findings. Here is the chart AT&T supplied in the trial document. I added the grid. 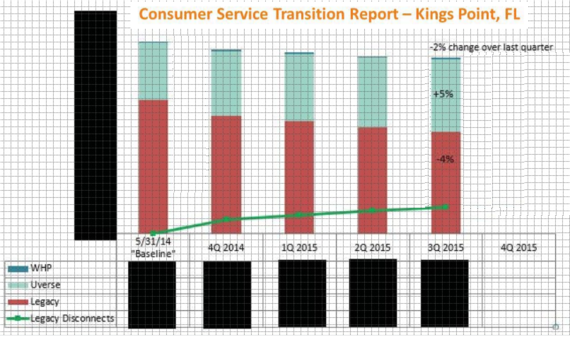 Not scientific sampling, but 'best guessing', I counted the boxes to fill in the redacted blanks for the 3rd quarter, 2015 report. The 'legacy' phone service represented 70% of the total accounts, while "IP" only represented 30% -- i.e., if there were 100 customers, AT&T had 70% on regular phone service and 30% using IP services, which is 'U-Verse', mostly. The slim, dark green line at the top of the chart is for the infamous "Wireless Home Phone" (WHP) service, which, like Verizon's VoiceLink, is wildly unpopular. I'll get to this in a moment.

By Sept 2015, after one year, three months, IP accounts represented 38.6% of the total accounting, and within the 'IP' accounting, there is a sliver for Wireless Home Phone. The 'Legacy' phone service represented 52.7%, while 8.7% of all customers had disconnected from AT&T and did not 'migrate' to another AT&T service.

AT&T's number of the IP increases, then, is not based on the total number of customers; it just discusses the IP category as if it was of equal size as the number of regular phone customers.

Thus, AT&T's 'increase of IP' needs to be tempered with the fact that it was a fraction of the size of the existing legacy copper wires.

But the real kicker is -- U-Verse is a COPPER-TO-THE-HOME SERVICE! It uses the existing copper wires; the same exact legacy wires that are used for the phone service.

So, 99% of Delray Beach is still using COPPER WIRES, it would appear; AT&T just doesn't mention this fact.

And wireless substitution? Baloney. It is clear that the wireless substitute, named Wireless Home Phone, "WHP", is a total bust. It can't substitute for regular, wired phone service as it can't do basic data applications and it is wireless, so it is simply not as reliable as it requires good reception. This partially redacted part of the AT&T trial results explains that the reasons for not moving to WHP are poor signal strength and compatibility with alarm services, medical devices and 'Life Alert". 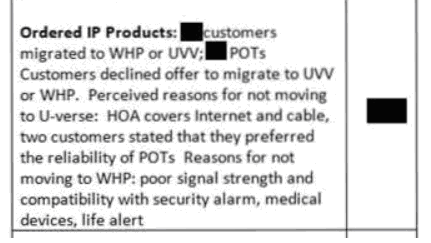 And it is not that AT&T isn't trying. AT&T has been doing a full court press, including 14 events from just September to November 2015 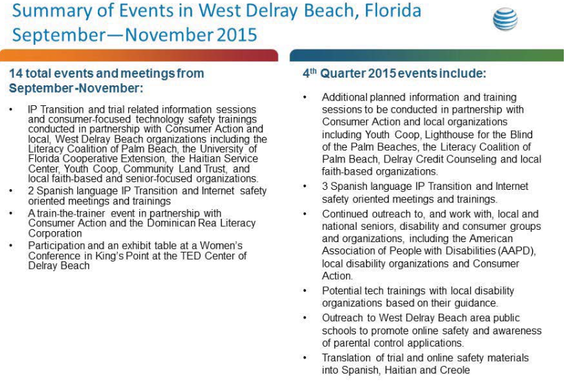 Unfortunately, this is what AT&T believed would be the results of the IP Trials - 100% of the wires would be reduced to a fraction of the installed lines by replacing it with wireless. And note that AT&T doesn't have a plan for 4% of customers at all - "TBD"-- To Be Announced.

Bottom Line: Customers, especially "seniors", can see through a con when they are presented with one, though it doesn't have anything to do with age.

AT&T's plan is to 'shut off the copper' and force-march customers to their inferior and more expensive wireless services, where it doesn't want to upgrade the networks, like rural areas. But the fact that their premier product, U-Verse, is a copper-to-the-home service, which AT&T never mentions, and that reporters, the FCC and politicians haven't bothered to recognize and expose this entire IP Transition con, is as much of a concern about the IP Transition as is the lack of customer enthusiasm.