With construction nearing completion at Midtown's most buzzed-about new rental property, the Auburn, 7 out of 8 retail spaces are occupied as the developers prepare to start renting apartments.

Located at the corner of Cass Avenue and Canfield Street near Wayne State University, the $12 million mixed-use development was developed by the Roxbury Group with partners Invest Detroit and Midtown Detroit, Inc. On the second and third floors, 58 rental units priced from $780 to $995 a month will be available and shown off to potential tenants and the curious during open house events Friday, 12 p.m. to 9 p.m., and Saturday, 4 p.m. to 9 p.m.

The spaces, all one-bedroom apartments and studios, are likely to go fast.

"There's a shortage of quality housing here in Midtown," said Sue Mosey, president of Midtown Detroit, Inc. "We could fill three or four buildings like this."

Roxbury Group Vice President of Development James Van Dyke said they looked to other urban developments in New York and Chicago for inspiration and included common gathering areas, with two decks on the second floor, one that opens into a year-round interior space that can be used for hosting events and screenings. As well, the small units are closer to New York standards with an average of 615 square feet, but Van Dyke said that hasn't deterred possible renters.

But those who aren't moving into the Auburn will also have something to look forward to. Its first floor offers 9,000 square feet of independent retail space.

A mix of food and retail, the businesses are intentionally a varied group. Van Dyke said they were looking for retailers with interesting concepts and the expertise to carry out their vision, which is why many of the owners will sound familiar.

The Auburn will be home to Go Cycle Studio's second location. The exercise studio for spinning classes first opened in Royal Oak several years ago.

Source Booksellers, who have been open on Cass in view of the Auburn for 10 years, are moving into the new building for the larger space and chance to expand their carefully curated selection of nonfiction books.

In August, The Huffington Post reported that Russell Street Deli will launch Topsoil, a carry-out and quick-dining food counter serving vegetarian and vegan meals in the building. A Thai restaurant will be its neighbor, also with a quick-dining concept, from the owners of Sy Thai in Birmingham.

Hatch Detroit 2011 winner Joe Posch will open Hugh, a store specializing in men's design and furnishings. Next door will be another design store, Nora.

The Auburn's management company Center City Properties will fill one of the retail spaces, and the final shop has not been announced, though it is likely to be a coffee shop.

The spaces were designed at a size and price point, about $800 a month, so a small neighborhood business or entrepreneur could launch a business. Van Dyke said they turned down rental offers from several larger companies or chains.

But business longevity is an important concern in the Cass Corridor. While excitement swells about a growing retail corridor in MIdtown, where Auburn residents will be just a short walk from bars, bakeries, boutiques and more, those emotions haven't stopped other nearby businesses from closing, like the short-lived Chou Anime Cafe, Leopold's Books and Thistle in the last several months. Van Dyke said most of the retailers behind the Auburn shops have leased their spaces for three years.

Below, take a sneak peek at the Auburn building's outdoor decks, apartments and retail owners: 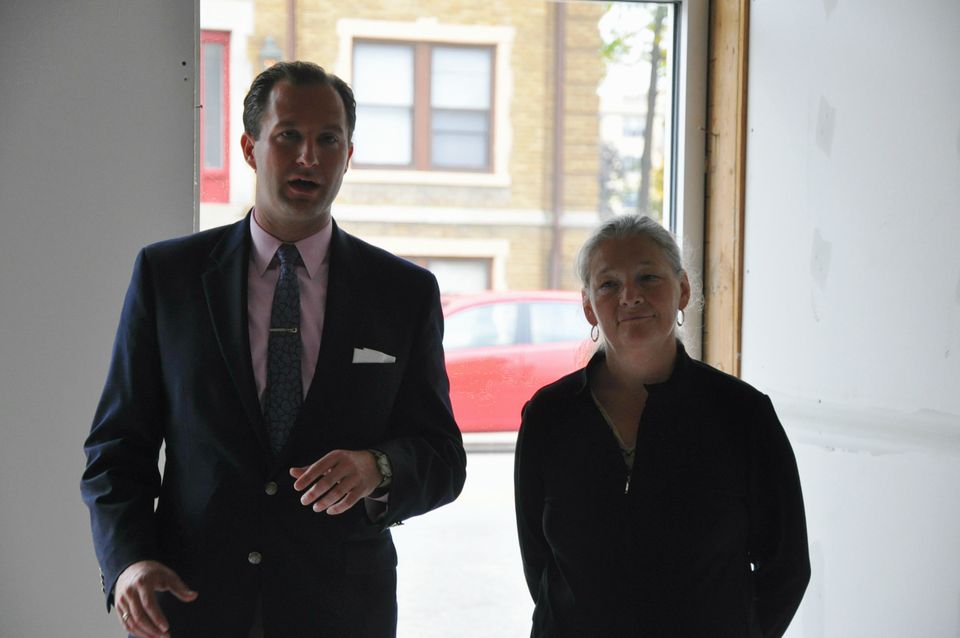 1 / 12
James Van Dyke And Sue Mosey
James Van Dyke, vice president of development for the Roxbury Group, and Sue Mosey, president of Midtown, Inc., announced the seven confirmed retailers at new mixed-use building the Auburn in Detroit on Weds., Oct. 3. The $12 million development at Cass Avenue and Canfield Street also holds 58 apartments on the second and third floors that have a scheduled move-in date of Nov. 1/