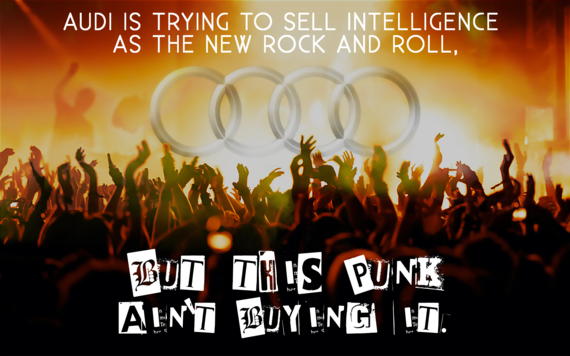 Iggy Pop was punk rock before the world knew what punk rock was. He and his band, The Stooges, are credited with being one of the most influential rock and roll bands of all time. If punk rock was a punk rock band, Iggy and The Stooges would be the fire-breathing front man.

So imagine my surprise last night when, in between one of my favorite network T.V. shows, I hear a tune by one of my all-time favorite rock and roll bands.

I look up and I'm greeted by a bunch of kids bouncing around in the pit at a rock and roll show. I'm intrigued. The scene cuts to a movie studio, where a man appears to be filmed falling through space. I'm nervous.

And then I see it, and immediately--almost involuntary, even--I hear a faint "God damn it," slip from between my pursed lips. The Audi logo, blurrily emblazoned on a steering wheel.

After clips from a debate team arriving home to riotous applause from hundreds of their classmates (lol), a 3D printer, some yuppies with virtual reality goggles, and a brand spanking new Audi A4--in all its polished and luxurious glory--the ad gets to its point:

"Intelligence is the new rock and roll."

Ugh. Really, guys? Even for an ad gimmick, that's a pretty low blow. Rather than turn this into a rant, let's take a critical look at the important elements of this T.V. spot:

Let's start with the song. Iggy Pop and his band, The Stooges, are regarded as one of the most integral proto-punk bands of all time, and while "Crocodile Rock" and "Tie a Yellow Ribbon Round the Ole Oak Tree" were topping the Billboard charts, The Stooges were releasing Raw Power, a punk rock cornerstone.

That said, if I were a company trying to appeal to the rock and rollers of the world, a Stooges song would be an excellent choice. Only, the song used in the commercial, "Search and Destroy", is arguably a song denouncing technology and its use in warfare (after all, "Search and Destroy" was written and released during the Vietnam War).

So Audi essentially made a commercial about the awesomeness of technology that features a song that warns about the dangers of having too much technology. Call me crazy, but that sounds a bit counterintuitive, no?

"Intelligence is The New Rock And Roll"

And then there's the whole "Intelligence is the new rock and roll" thing.

If there's one thing punk rockers love, it's authenticity. It's at the root of everything rock and roll music is all about. So much of rock and roll music is about coming to terms with our place in the world and who we are in it. It's about realness. It's about not having enough money to buy the things we need, it's about things like addiction and heartbreak, and work, and prejudice and oppression, and all the other things in this world that are yet a little too raw for mainstream squares.

Rock and roll music is authentic and experiential. It should be relatable.

But Audi--a brand who has spent the last 100 years appealing to the world's wealthy and extravagant--is the literal antithesis of rock and roll. By trying to tap into that gritty rock and roll demographic, they just come off as inauthentic.

Audi America's Director of Marketing Loren Angelo summed up Audi's crude attempt at hijacking and discrediting an entire social, cultural, political, and musical movement in one matter-of-fact quote in a recent AdWeek interview:

"The idea of equating rock 'n' roll with the new world of technology felt very fresh to us. These inventers and thinkers are the new disrupters. They are the people we all want to be. What's more rock 'n' roll than that?"

What's more "rock 'n' roll" than the "new disrupters" of the technology movement? Rock and roll, that's what. And you know what the least "rock 'n' roll" thing someone can probably do is, Audi? Cultural appropriation.

How Could Audi Have Done It Differently?

If Audi wants to appeal to a younger generation of "disrupters" and tech nerds, they could have done so with more genuine authenticity. Right off the top of my head, here are three ways this commercial could have been both authentic and respectful, and still highlight the perceived relationship between rock and roll and the new tech world: