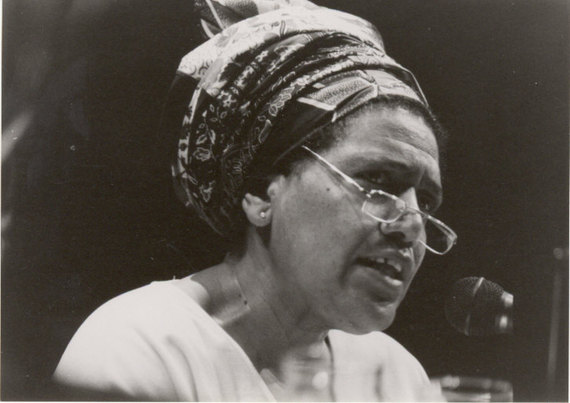 I have an Audre Lorde google alert on my phone. It helps confirm how relevant my favorite black, lesbian, mother, warrior, poet remains today.

Last week, MacArthur "genius" Alison Bechdel of Fun Home fame, named Audre Lorde's memoir Zami: A New Spelling of My Name, one of 10 "desert island" books in the New York Times Style section. All over the place, commentators are quoting Audre as they deconstruct Beyonce's Formation video. "If we do not define ourselves for ourselves, we will be defined by others," Audre famously said -- words that Bey seems to have taken to heart. Audre's got her own trading card, and celebs like Willow Smith show their feminist cred by wearing the Audre-Gloria-Angela-bell t-shirt, cropped of course.

We black girls have our magic, but we need the words of Audre Lorde now more than ever. And in these messy times, so does everyone else.

I got my personal dose of Audre magic 25 years ago, when I met her for the first time. I was a staffer at Essence magazine and our editor in chief, Susan Taylor, allowed each of us to invite an inspirational person to lunch, for a sister circle-salon kind of thing. I invited Audre. When I met her in our lobby, she was smaller than I imagined. She took my hands in hers, then pulled me into an embrace and whispered "thank you." She felt fragile, fighting the cancer that would take her life the following year.

During lunch, our crew of feisty, politically-engaged black women editors, got into a spirited discussion of white supremacy, the war and the messy public conversation about race that was dominating the news. 1991 was a year of racial disruption: the Gulf War dragged on, with so many people of color on the front lines. Rodney King had been beaten by the LAPD, and Mike Tyson had beat down his Miss Black America girlfriend. HIV was ravaging black communities, and basketball hero Magic Johnson revealed he was living with the virus. The Clarence Thomas-Anita Hill spectacle had polarized our community and a couple of us in the room were barely speaking to each other behind it.

As we debated the issues, and shared our feelings, Audre was largely quiet, listening. Then during a rare break in the conversation, she leaned in and explained, "when something is dying, it doesn't go out easily. It clings and claws to life, refusing to let go and pulling everything down with it. It goes out ugly, and as the world is changing, that's what we're feeling. Something dying." Snap. I think about that often, because it makes so much damn sense.

Two years ago, Audre Lorde came back into my life. Friends let me know that Audre's partner in the final decade of her life, Dr. Gloria Joseph, had written a book about her and was having trouble finding a publisher. They suggested I talk to her, and offer some guidance. Several months later, I found myself in St. Croix, in the home where Audre lived and died, with Gloria and Audre's daughter, Beth, talking about that book. I'd written or co-written a bunch of books, and my mother owned a bookstore, but could I publish this book? That's when another of Audre's famous sayings raced through my head: "I am myself, a black woman warrior poet doing my work -- come to ask you, are you doing yours?"

The Wind Is Spirit: The Life, Love and Legacy of Audre Lorde will come out this Thursday, February 18, on what would have been Audre's 82nd birthday. In the days that follow, I'll be posting excerpts from the book in this space, because now feels like just the right time for another dose of Audre Lorde magic, just when we all need it most.

To learn more about the book or to order a copy, click here.