What do you get when you mix a founding member of chart-topping women's choral group Mediaeval Baebes with a founding member of chart-topping psychedelic rock band Kula Shaker? It's amazing, and you can hear the results on When the World Had Four Corners, the brilliant, brand-new album, just released, by Tumblewild. The group, currently a duo and set to expand, consists of married couple Audrey Evans and Alonza Bevan, she of lyrics and lead vocals, he of bass, guitar, keys, etc. 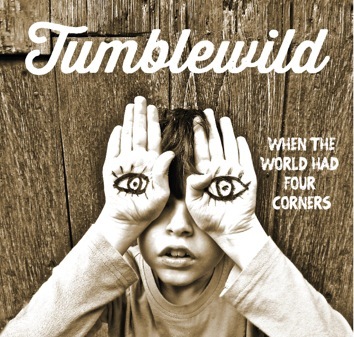 Alonza and I have met -- once, in L.A. -- when Alonza was touring with Aqualung (following his work with Johnny Marr and the Healers), and he had just picked up a tiny baby grand piano for the child Audrey and he were expecting. A few years later, that's their Lewis on their new album's cover, posing before the barn-turned-studio the couple have converted to record, among other things, the latest Kula Shaker album, and of course Tumblewild's When the World Had Four Corners. I congratulate them on both the boy and the album, and ask about "Revenge," their new single and video. Audrey picks up the other line and orchestrates.

"I wanted to do a nice, dark, dirty blues number, really," reflects Alonza, "and Audrey came up with a great lyric. We constructed it in the studio -- played everything ourselves on that one. We wanted to chuck some un-bluesy intstruments into the blues soup, like the Indian tamboura, and stuff like that. And even the approach to the drums was kind of a bit more voodoo-tribal, as opposed to the blues thing. Musically it was just a big play on the blues, but mixing up a nice soup."

Audrey chimes in on the visuals: "Well, we live not far -- we're lucky -- it's not far from an old steam train line. It's run by amateurs, so they just do it for fun. And you can pretty much go there and look at whatever you want: you can look at trains, you can get on a train -- so we turned up there. We had some Scottish friends over, and our friend Scott had a camera, and we just did it there and then."

In one day. Not bad! Alonza laughs: "We got a lot of freebies on that one. Normally it costs quite a lot to get a steam train in a video." 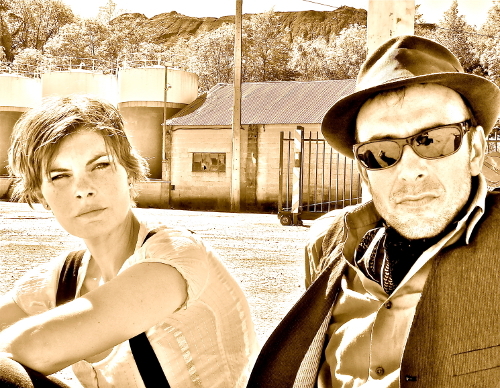 Audrey and Alonza name-check Bonnie and Clyde as creative inspirations, which prompts Audrey to share some of her methodology:

"All the songs we do, I can't sing about myself. Every song -- it's not a scene -- but it is inspired by something: by a photograph, or by a book I have read, or by fairy tales. And this one was kind of inspired by Dial M for Murder -- you know, the Hitchcock film. So it's got that, but then you add the bluesy kind of thing to it, so there's a theme to it, a kind of revenge theme.

They both laugh, and Alonza riffs on "Hell hath no fury..." Then Audrey continues:

"But also, the album is kind of influenced by the move we made, from London to this remote village in the middle of the woods, and kind of discovering our surroundings, and living a different life."

"We feel a bit like outlaws here -- now that we've left London," adds Alonza. I ask if they fade in, or stick out.

"We are 'les Anglais,'" he concedes. 'Oh: les Anglais.' They knew -- we hadn't been here more than a day, and we bumped into someone in another village, a few villages away, and we were chatting, and he said, 'Oh, you're the English.' And word had already spread. People around here are super-friendly. That was remarkable, coming from London." 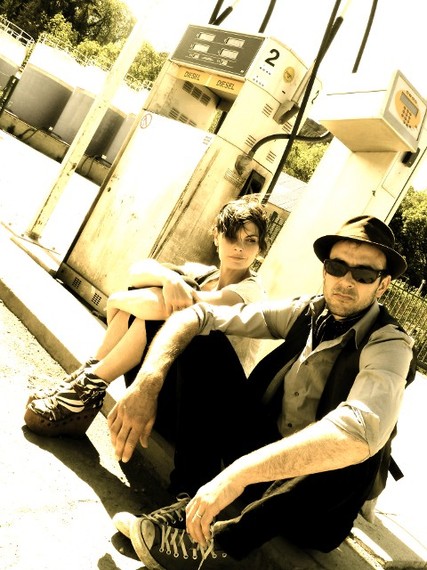 Does Alonza, being Welsh, take umbrage to being called "English"?

"It's funny for me," he declares, "because I was brought up in England, but my parents were both Welsh -- and particularly my father, was very nationalist-Welsh, like they all are, really -- and just had a huge contempt for the English. It was a real dilemma for me, growing up, you know, within that English culture, while also having -- they killed our king, you see."

"It's a funny, schizophrenic thing," continues Alonza. "As Audrey says, I'm only 'Welsh-ish.' When I try to tell her I'm Welsh, she explains that I'm 'Welsh-ish.'"

"Yeah, a little bit of Welsh," laughs Audrey, returning to their change in environs. "It was amusing to come to the country -- we had that kind of romantic ideal of like, oh, lovely walks, meadows -- but we didn't think of, you know, basic things, like plumbing and heating." 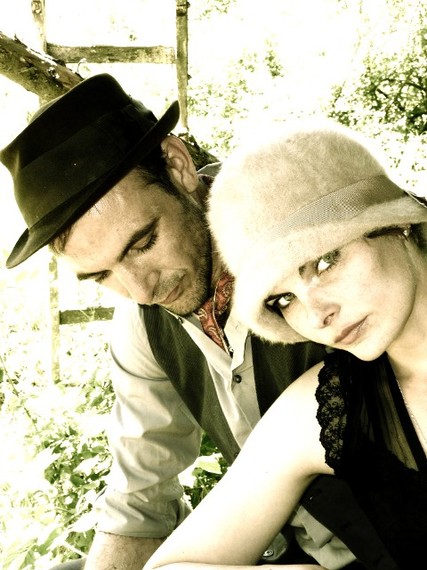 "Heating's a problem," admits Alonza. "Nothing to do with the album, but yeah, it's true: They don't have buttons here, or like a little dial you turn up when it gets cold, you just turn it, and it gets warmer? You kind of have to cut wood. You have to work for your warmth."

The work has paid off. When the World Had Four Corners is terrific, already one of the great albums this year. We discuss a few tracks, and I ask if that's Lewis' baby-baby grand on the delicate "Elevator Girl."

"No, that would be cool, wouldn't it?" responds Alonza. "It's actually very out-of-tune, that piano. That's a little glockenspiel -- it's something that Audrey rescued from an old school. It's sad, a lot of the music education of the early years is changing, so they're chucking out all those old little Fisher Price bells, and glockenspiels, and things like that -- but they sound great, they record great." He cites a Serge Gainsbourg inspiration (Hammond organ, et al) -- and lo! there's "Bonnie and Clyde" again. Consistent, these two.

Audrey brings the backstory: "It's inspired by a Robert Frank photograph called 'Elevator Girl.' This girl, that's her job -- that's all she does, she's pushing buttons, and no one sees her. That photo takes that kind of loneliness, and it spoke to me -- so I decided to write a song about it."

Detailing another: "'Lucinda' -- that song was inspired by a book called Water for Elephants (by Sara Gruen) -- they did a film afterwards -- and it's a story about a fat lady in the circus, and the man telling the story -- and that spoke to me -- how they used to 'red-light' people: they used to chuck them off the train!"

Audrey shares her appreciation for Edward Hopper, then turns to a haunting, standout track. "'Sweet Bones' is actually 'The Grasshopper and the Ant,'" she says, and asks if I know what it is. (Pleasingly, I do: Aesop's fable.) "It's my favorite of Aesop's fables, and it used to terrify me as a kid! I thought, 'I really want to be an ant! But I know that I'm a grasshopper at heart.' Actually, I think I married a grasshopper."

The two share a good chuckle. I ask how Alonza and Audrey -- the bass-man and the Baebe -- manage to merge their estimable talents.

"We have very different musical tastes, to start with," explains Audrey. "And being husband and wife, it's weird to work with your husband. I just want to laugh all the time, or I just want to throw hissy-fits -- it's one or the other. But sometimes for me it just works. And I think the will of both of us wanting to do something, and enjoying each other's company, and respecting each other -- like each other's paths, where we come from." She laughs, "But like, when you started bringing the Hammond organ out--"

Alonza rejoins, amused, "You hated it. You hated everything. Anything new I would try, you hated it."

Audrey clarifies: "No! I want to keep things all simplistic -- like, fewer instruments -- I'm a big fan of letting a song breathe. So those were kind of our fighting points: Alonza always wanted to add another thing on. But then, it just worked: we do enjoying doing stuff together. And we do have a mutual love of blues music, or traditional kind of American folk music. And so for that it jelled, it kind of worked." 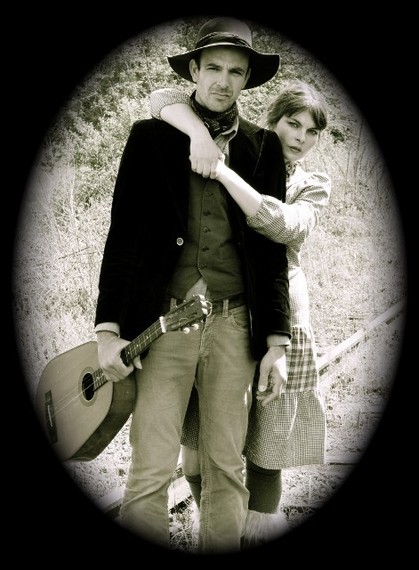 "Kind of" is an understatement. When the World Had Four Corners is rich and rewarding, an album of gems. We close with Audrey and Alonza weighing in on the art form itself:

"I'm a huge music fan," notes Audrey. "I think I prefer even listening to music to singing or playing myself. But I just can't see my life without music. I guess it's like a natural progression -- I like other things: I love photography, and there's other art forms I love. But music -- I was bathed in it, I guess, from an early age."

"Music, it's true," enthuses Alonza, "of all the art forms, it's the one that spoke to me the most -- the one that kind of moved you the most -- I guess when you're younger it's something that you just connect with -- more than you would with a piece of art, or even the movies or something. It becomes a soundtrack to your life. It's what you project onto the world."

When the World Had Four Corners CDs