August was the fourth warmest such month on record worldwide, marking the 330th straight month with a global temperature above the 20th century average, according to a report released Monday by the National Oceanic and Atmospheric Administration (NOAA). In other words, the last time the globe saw a below average month, Ronald Reagan was just entering his second term in office. The last below average August occurred even further back in time, in 1976, when Gerald Ford was serving as U.S. President.

Warmer than average temperatures occurred in the northeastern U.S., eastern Canada, southern Greenland, central and southern Europe, Japan, and western Australia, among other locations. Siberia lived up to its reputation by being the main region that was cooler than average during the period. 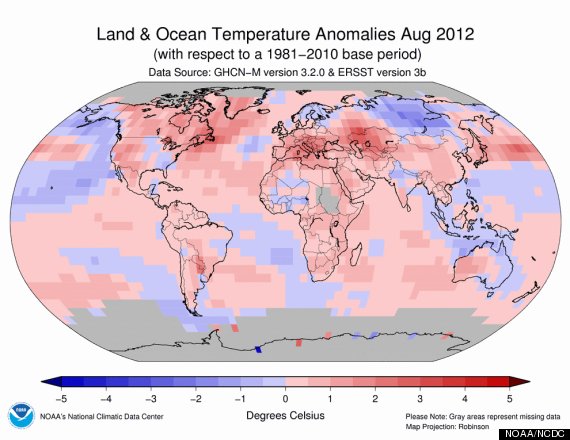 Map showing global land and ocean surface temperature departures from average during August 2012. Click on the image for a larger version. Credit: NOAA/NCDC.

The combined average land and ocean temperature for August was 61.22°F, or 1.12°F above the 20th century average. The global land temperature alone tied with 2001 and 2011 as the second-warmest August on record. Ocean temperatures tied with 2006 as the fifth warmest on record, and a warming trend in the central and eastern equatorial Pacific signals a coming El Nino event, NOAA's National Climatic Data Center stated. El Niño conditions are likely to be declared sometime during September, and such events often boost global average temperatures — making another record warmest year more likely.

August saw a record decline in Arctic sea ice, with the ice cover reaching the record smallest daily extent on August 26, a level that had been previously set on September 18, 2007. The official 2012 sea ice minimum is likely to be announced during the next several days. Sea ice extent during August averaged just 1.82 million square miles, which, at nearly 40 percent below the 1979 to 2000 average, was the all-time lowest August sea ice extent on record.

During August, the Arctic lost an average of 35,400 square miles of ice per day, NOAA reported, which was the fastest rate ever observed for the month. That is the equivalent of losing an area of ice equal to the state of Maine every day for 31 days.

By the end of the month, sea ice extent had dropped below 1.4 million square miles, much below the 2007 record level of 1.61 million square miles, NOAA stated. The six lowest sea ice extents have all occurred in the past six years, a sign of the rapid disappearance of summer sea ice in the Far North, a development that may have far-reaching implications for weather patterns in the northern hemisphere in particular.

Meanwhile, Antarctic sea ice during August ranked as the fourth-largest August extent on record there. The disparity between sea ice around the South and North Poles was anticipated by global climate models, and is consistent with projections based on manmade global warming.

The year-to-date is running warmer than average, but not record warm, as the first eight months of 2012 tied with 2006 as the ninth warmest such period on record. If Pacific Ocean temperatures continue to warm in response to the growing El Niño, then the year may end up warmer than temperatures so far would suggest.