"In awarding the Nobel Peace Prize. . . to Aung San Suu Kyi," the Norwegian Nobel Committee announced in 1991, it wished "to honour this woman for her unflagging efforts and to show its support for the many people throughout the world who are striving to attain democracy, human rights and ethnic conciliation by peaceful means."

Suu Kyi, the Committee added, was "an important symbol in the struggle against oppression."

Fast forward 24 years, and the Rohingya Muslims of Myanmar might disagree with the dewy-eyed assessment of the five-member Nobel Committee. And with Gordon Brown, too, who called Suu Kyi "the world's most renowned and courageous prisoner of conscience." Not to mention Archbishop Desmond Tutu, who has said that the people of Myanmar "desperately need the kind of moral and principled leadership that Aung San Suu Kyi would provide."

In recent years, the Rohingya Muslims -- "the world's most persecuted minority," according to the United Nations -- have struggled to attract attention to their plight.

Until, that is, a few weeks ago, when thousands of Rohingya refugees began arriving in Thailand, Malaysia and Indonesia, while thousands more are believed to be still stranded on rickety boats off the coasts of these three countries, with dwindling supplies of food and clean water. 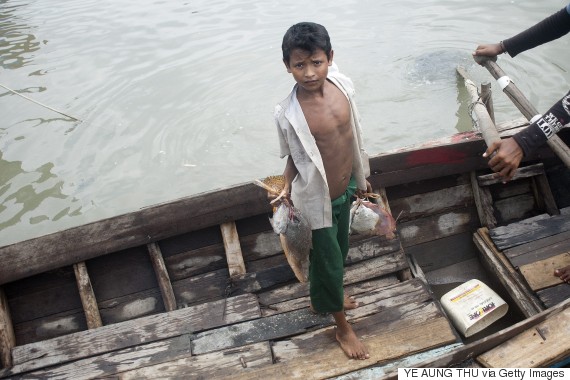 'So Hungry, So Skinny'

"Fisherman Muchtar Ali broke down in tears when he set eyes on the overcrowded boat carrying desperate, starving Rohingya off the coast of Indonesia," noted a report by AFP on May 20.

"'I was speechless,' Ali told AFP. . . 'Looking at these people, me and my friends cried because they looked so hungry, so skinny.'"

These Rohingya "boat people," however, are a symptom of a much bigger problem. As Kate Schuetze, Amnesty International's Asia Pacific researcher, has observed: "The thousands of lives at risk should be the immediate priority, but the root causes of this crisis must also be addressed. The fact that thousands of Rohingya prefer a dangerous boat journey they may not survive to staying in Myanmar speaks volumes about the conditions they face there."

Those oppressive conditions range from a denial of citizenship to Myanmar's 1.3 million Rohingya Muslims to severe restrictions on their movement, employment and access to education and healthcare, as well as a discriminatory law imposing a "two child" limit on Rohingya families in their home state of Rakhine.

Hundreds of thousands have been driven from their homes; their towns and villages razed to the ground by rampaging mobs. In 2014, the government even banned the use of the word "Rohingya," insisting the Muslim minority, who have lived in that country for generations, be registered in the census as "Bengali."

"Her refusal to condemn, or even fully acknowledge, the state-sponsored repression of her fellow countrymen and women, not to mention the violence meted out to them by Buddhist extremists. . . makes her part of the problem, not the solution."

So, where does Suu Kyi fit into all this? Well, for a start, her silence is inexcusable. Her refusal to condemn, or even fully acknowledge, the state-sponsored repression of her fellow countrymen and women, not to mention the violence meted out to them by Buddhist extremists inspired by the monk Ashin Wirathu (aka "The Burmese Bin Laden"), makes her part of the problem, not the solution.

"In a genocide, silence is complicity, and so it is with Aung San Suu Kyi," observed Penny Green, a law professor at the University of London and director of the State Crime Initiative, in a recent op-ed for The Independent. Imbued with "enormous moral and political capital," Green argued, Myanmar's opposition leader could have challenged "the vile racism and Islamophobia which characterises Burmese political and social discourse."

She didn't. Instead, she spent the past few years courting the Buddhist majority of Myanmar, whose votes she needs in order to be elected president in 2016 -- if, that is, the military will allow her to be elected president, or even permit her to stand -- by playing down the violence perpetrated against the Muslim minority, and trying to suggest a false equivalence between persecutors and victims of persecution.

In a BBC interview in 2013, for example, Suu Kyi shamefully blamed the violence on "both sides," telling interviewer Mishal Husain that "Muslims have been targeted but Buddhists have also been subjected to violence."

Is this mere hyperbole? If only. Listen to the verdict of investigators from the U.S. Holocaust Memorial Museum's Simon-Skjodt Center for the Prevention of Genocide.

"We left Burma," they wrote in a report published earlier this month, "deeply concerned that so many preconditions for genocide are already in place."

The investigators, who visited Rohingya internment camps and interviewed the survivors of violent attacks, concluded: "Genocide will remain a serious risk for the Rohingya if the government of Burma does not immediately address the laws and policies that oppress the entire community."

Yet, despite the boats and the bodies, the reports and the revelations, Suu Kyi is still mute. She hasn't raised a finger to help the Rohingya, as they literally run for their lives. Shouldn't we expect more from a Nobel Peace Prize laureate?

Maybe not. The words "Henry" and "Kissinger" come to mind. Plus, the Nobel Prize Committee has a pretty awkward history of prematurely handing out peace prizes. Remember Yitzhak Rabin, Shimon Peres and Yasser Arafat's joint prize in 1994? Ask the children of Gaza how that worked out. Remember Barack Obama's in 2009? Ask the civilian victims of drone strikes in Pakistan how that worked out.

Rabin, Arafat, Obama. . . ultimately, of course, they're all politicians. Suu Kyi was supposed to be something else, something more; a moral icon, a human rights champion, a latter-day Gandhi.

Why weren't we listening when the opposition leader and former political prisoner told CNN in 2013 that she had "been a politician all along," that her ambition was to become president of her country?

The sad truth is that when it comes to "The Lady," it is well past time to take off the rose-tinted glasses. To see Suu Kyi for what she is: A former prisoner of conscience, yes, but now a cynical politician who is willing to put votes ahead of principles; party political advancement ahead of innocent Rohingya lives.

"Ultimately our aim should be to create a world free from the displaced, the homeless and the hopeless," Suu Kyi grandly declaimed in June 2012, as she finally accepted her Nobel Peace Prize, in person, 21 years after she won it while under house arrest, "a world of which each and every corner is a true sanctuary where the inhabitants will have the freedom and the capacity to live in peace."

Forget the world. She should try starting at home, with the Rohingya of Rakhine. And if she won't, or can't, then maybe she should consider handing back the prize she waited more than two decades to collect.