(RNS) An Alabama teen who faced criticism for posting a smiling snapshot of herself in front of the Auschwitz concentration camp is defending her actions, saying that it was a tribute to her father who passed away.

Breanna Mitchell posted the selfie on June 20. About a month later, it went viral. 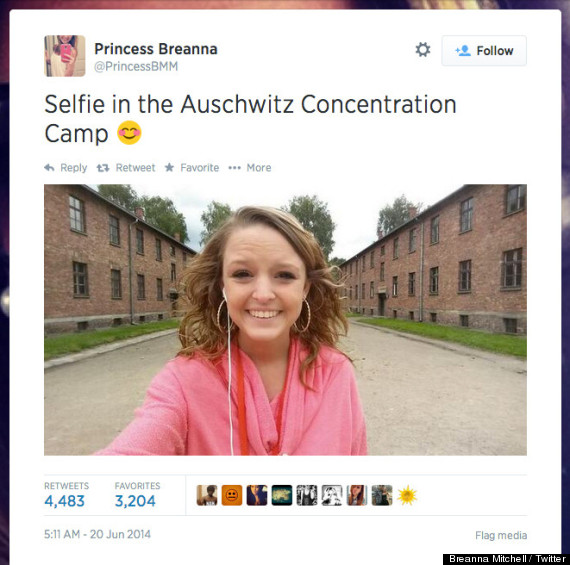 “Honestly, I don’t think I would do anything differently because I didn’t mean any harm,” Mitchell told TakePart Live in a video interview posted to YouTube on July 21.

On July 20, she posted on Twitter, “I’m famous y’all” as her story got picked up by media outlets.

Mitchell’s example brings to light the debate over taking selfies in front of places such as Auschwitz and the 9/11 Memorial Museum where so many people lost their lives. Critics suggested the incident pointed to a need to help young people develop digital decorum.

“If you’re going to stick your tongue out or make a duck face in front of the World Trade Center, I think that’s probably inappropriate,” Lizzie Post, great-great-granddaughter of manners maven Emily Post, told ABC News.

Since the social media backlash, Mitchell has received some support from people who have seen her story in the media. Her Twitter profile is now set to private.

“The Holocaust and World War II is the only thing that’s ever interested me in history,” Mitchell told TakePart Live.

She said it was also her father’s favorite part of history. “Whenever I graduated, [my parents] said they’d take me out of the States to go wherever I wanted. [My dad] died one year prior to that photo,” Mitchell added.