It feels like forever since we checked in on just how badly austerity is failing, so let's take a quick tour around Europe to see all the different reasons austerians should feel ashamed of themselves today.

In the U.K., austerity has shaved 6 percent from that country's gross domestic product over the past three years, estimates Oxford economist Simon Wren-Lewis. This amounts to $143.5 billion in lost income during that time, or nearly $5,400 per U.K. household.

"Although all governments like to give the impression that they can have a big impact on people’s prosperity, few actually do," Wren-Lewis writes. "These numbers suggest that the current U.K. government has managed to do so, but unfortunately by making us all poorer."

Some debt scolds, including the government of U.K. Chancellor of the Exchequer George Osborne, might argue that a little bit of economic pain now is worth it if you can avoid a government-debt blowup in the future. That was the gist of Harvard economists Carmen Reinhart and Kenneth Rogoff's oft-cited paper, "Growth In A Time Of Debt," which argued that government debt above 90 percent of GDP led to sharply lower economic growth. Reinhart and Rogoff followed up their paper with a series of op-ed pieces and talks to Congress to help convince governments here and in Europe to hurry up and cut government debt sooner rather than later.

The trouble is, austerity has not worked to lower government debt burdens. It has only made them worse.

Surprise, surprise: it turns out that slashing government spending and raising taxes in the midst of a recession/depression actually lowers tax revenue and raises the cost of government services for the poor and unemployed, which makes government finances even worse.

Osborne recently warned that the government budget might not be balanced until 2018, four years later than he originally estimated when he launched his austerity program in the U.K. in 2010, accompanied by the cheerleading of Reinhart and Rogoff.

Elsewhere, the struggling European countries that undertook their own austerity programs, as a condition of receiving bailout funds from the austerity fanatics holding the purse strings, are still seeing their debt loads rise, as the chart below shows. (Story continues below the chart, which was inspired by Matt Phillips at Quartz.) 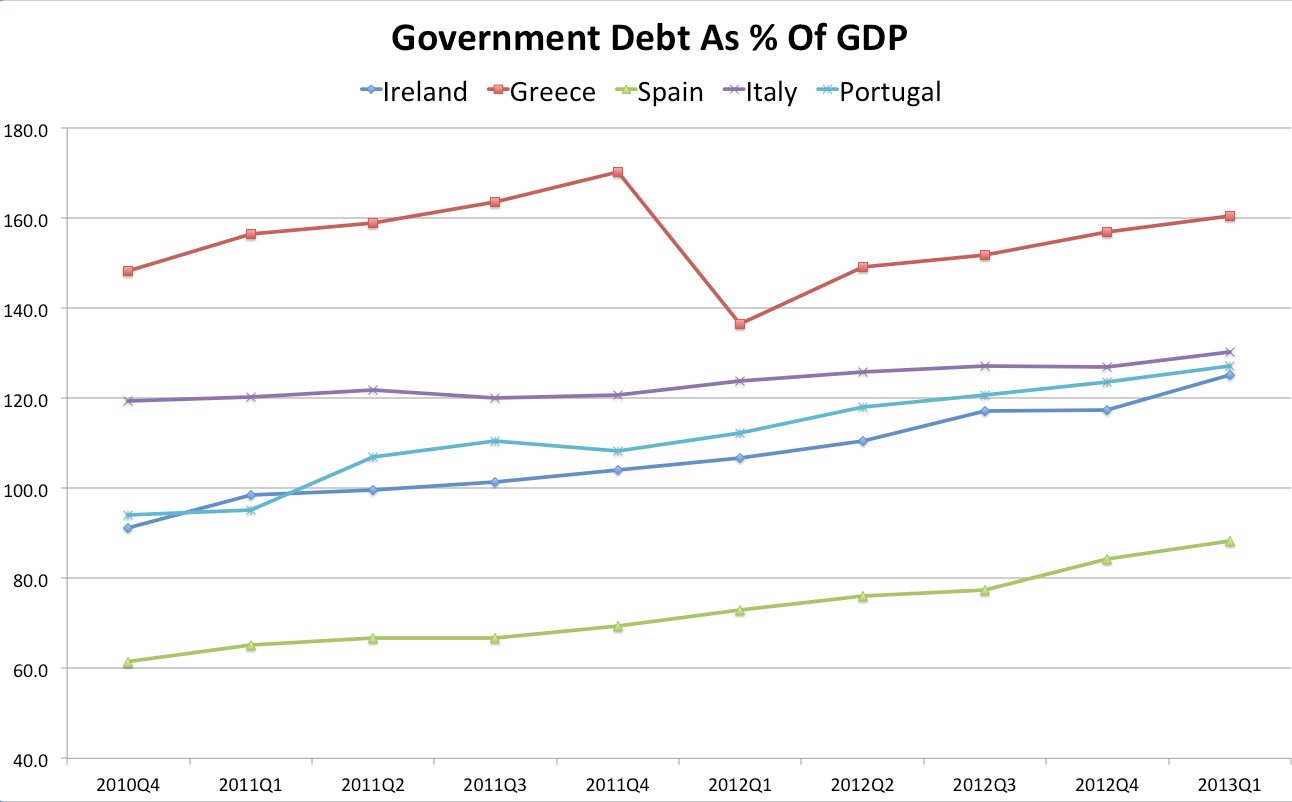 Again, austerity is not solving the government debt problems of these countries; it's making them worse:

The intellectual underpinnings of the austerity movement took a serious blow earlier this year when a paper found that Reinhart and Rogoff's research was riddled with errors and omissions. A series of subsequent papers suggested the Harvard economists had badly misinterpreted their data.

Despite that evidence, austerity fanatics have hardly dialed back their zeal for cutting government debt. Maybe these hard numbers will be more convincing.

States Whose Residents Are Most Affected By The Fiscal Cliff