Austerity isn't just hurting the U.S. economy right now -- the damage is going to last for many years.

A new study by the Center for American Progress, a left-leaning think tank, estimates that today's austerity measures are going to leave the U.S. economy with 2 million fewer jobs and $433 billion less in economic growth by 2019.

"We are forgoing investments in new technology and in the technical skills and productivity of the U.S. workforce that drives economic growth," CAP economist Adam Hersh wrote in the report. "In other words, as a result of fiscal contraction and the acceptance of a protracted economic recovery, the potential for the U.S. economy to grow is shrinking."

Another recent think-tank study, by the Brookings Institution, found that austerity had already cost the U.S. economy more than 2 million jobs since the recession. The CAP study suggests those jobs are not coming back for at least six years, if ever.

The reason for this is that the anemic recovery has left too much of the economy's valuable resources idle: People and factories aren't working, when they could have been. As you can see from the chart below, which was produced by Hersh and the CAP, the U.S. factory sector has still not gotten fully back up to speed since the recession. And the job market is in even worse shape, with millions of workers sitting out of the labor market, their skills deteriorating by the day. (Story continues below gloomy chart.) 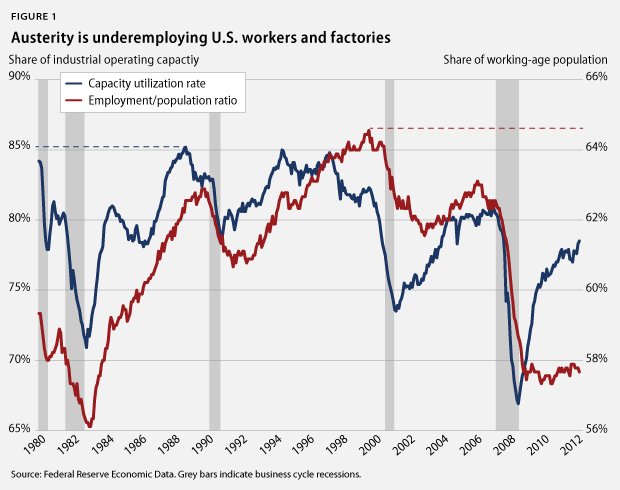 As you can see in the chart, less than 58 percent of the U.S. working-age population is either working or looking for work, the lowest level of labor-market participation since the early 1980s. Some of this is due to Baby Boomers retiring, but most of it is due to a sluggish economy, studies by the San Francisco Federal Reserve and others have shown.

As Hersh writes in his study, idle workers will slowly lose their skills, and companies will be slower to invest in new productivity-enhancing technologies. This may be one reason for the troubling slowdown in U.S. productivity in recent years. Ultimately, this will lead to lower long-term growth and fewer jobs.

The economy is weak for some reasons that don't have to do with austerity. Mainly, the bursting of the credit-market bubble of the mid-2000s has taken a long time to clean up. And it is true that the economy is chugging along -- barely -- despite austerity, as The Wall Street Journal's David Wessel pointed out on Thursday.

But the economy might be in much better shape had the U.S. government not pivoted, shortly after the recession, to its biggest spending squeeze since the end of the Vietnam War. Though the economic research driving this austerity movement has since been thoroughly discredited, many of these policies are still going strong. Austerity measures, including the payroll-tax hike and the government spending cuts of the "sequester," are going to cut 1.5 percentage points from growth this year, economists estimate. Meanwhile, federal, state and local governments have cut more than 800,000 jobs since the recession ended, adding to the labor market's pain.

All of this missing growth could have put unemployed people and dormant factories back to work. Instead, the productivity of those people and factories will continue to wither, and our future along with it.

Bankers Who Want To Break Up Big Banks