From Susan Kelly for National Geographic:

One of the world’s most adored animals is now officially in peril on our rapidly changing, human-oriented planet.

As their forests fall to development in their native Australia, koalas find themselves having to survive alongside people in urban sprawl, where they get into all kinds of trouble. Dogs, cars, swimming pools and many other things that are a part of modern human life can be deadly to these tree-dwelling marsupials.

But now it’s hoped the sharp decline of Australia’s national symbol may be averted, following a historic decision by the Federal Government to list the koala as Vulnerable under the country’s national threatened species legislation. The ruling means the Federal Government could impose conditions on plans for new mines, housing developments and timber operations to prevent habitat disturbance, though it will not affect existing developments in koala areas.

Photos and captions courtesy of National Geographic and Susan Kelly

PHOTO GALLERY
Will Australia Save Its Koalas?

It’s a welcome political awakening. Koalas have been under immense pressure for some time from urban or industrial expansion into wild areas, and Australia’s new listing of koalas lags well behind other countries. The U.S. Government listed koalas as Threatened in the year 2000, when it determined that the Eucalyptus forest on which this unique animal depends had been greatly reduced from land-clearing.

“Despite several conservation actions by the Government of Australia, the limited koala habitat continues to deteriorate. The species also is threatened by fragmentation of the habitat that remains, disease, loss of genetic variation, and death by dogs and motor vehicles due to development,” the U.S. Fish & Wildlife Service noted in the U.S. Federal Register in May 2000.

More recently in 2009, the International Union for Conservation of Nature (IUCN) declared the koala as one of the ten species in the world most vulnerable to climate change. Global warming has been linked to increasing CO2 levels in the atmosphere which “reduce the nutritional quality of Eucalyptus leaves, causing nutrient shortages in the species that forage on them. As a result, koalas may no longer be able to meet their nutritional demands, resulting in malnutrition and starvation.”

Despite clear evidence of significant losses and international concern for the adorable icon, not all koala populations will be classified as Vulnerable by Australia’s Federal Government. The legislation will only apply to the most at-risk populations on the east coast of the country – in New South Wales, Queensland and the Australian Capital Territory. At the state level, “koalas are already listed as Vulnerable in New South Wales and have been for some time, and it hasn’t helped them greatly. But it’s well and truly better that they are put on a listing rather than not,” said Cheyne Flanagan, Supervisor of the Port Macquarie Koala Hospital, which has been in operation for almost 40 years. It’s the world’s first hospital dedicated to wild koala rescue, care and rehabilitation and funded entirely by donations. (Watch the video clip of an orphan baby koala being treated for injuries at the Koala Hospital.)

Wildlife has been collateral damage in the drive for economic growth and Environment Minister Burke recounted widespread and severe declines. The “Koala Coast” in Queensland, a former stronghold for koalas, is one of the most glaring examples of national negligence, where numbers plummeted from around 6,000 to 2,000 in the past decade. (Read more about this in the National Geographic article Koala Rescue.)

Even so, the prescription for koala protection in this region is disagreeable to Queensland state leader Campbell Newman, who claims it is “mindless green tape” and is concerned “this could interfere with the construction sector.”

Political posturing ensued between state and federal governments following Newman’s critical comments, with Burke calling the Queensland leader an environmental vandal. “The science is overwhelming that the Queensland koala has taken a massive hit over the last 20 years,” Burke said. “Campbell Newman may be happy for Queensland to be a place where koalas only live in zoos, but I am not.”

Public reaction to the debate in the media ranges from “Why does it have to be environment or development? Does he not see that good planning can achieve for both? Do we have to cover the whole state in houses or mine pits?” – to – “It will drain millions from all people wishing to improve or subdivide their properties and add further cost to all land purchases for residential use.”

Burke’s announcement has received a positive if somewhat mixed reaction overall. It is good news that the koala has been listed under Commonwealth legislation, according to Central Queensland University koala ecologist Alistair Melzer. “However, it is hardly a cause for celebration.”

Some sectors of the community remain unconvinced the current designation is suitable, with advocates expressing views that koalas should be covered countrywide. But the majority of koala lovers, scientists and campaigners greet the listing with enthusiasm, heralding it as progress by the current Gillard Government and a refreshing reprieve from criticisms that government typically puts industry ahead of conservation.

For this writer, it’s mystifying how the furry icon could be in such dire straits in the first place, in a lightly populated, wealthy and educated country like Australia. With population pressures and poverty prevailing in most of the rest of the world, wildlife decline is understandable, although still unacceptable. Without these same pressures, it appears Australia’s mismanagement of its natural heritage is purely for shortsighted economic gain.

Economic imperatives have driven koalas to the edge of existence. Twice. This is the second time in modern history they needed to be rescued from the brink. Where they were once exploited for the fur trade, they are now being annihilated by habitat loss and its secondary effects, like the stress-related chlamydial disease that threaten them.

Cheyne Flanagan of the Koala Hospital reports chlamydia is one of the most serious issues. “This is a disease that tends to occur in disturbed habitats, it doesn’t happen in populations that are healthy and in the bush … Without a doubt, all wildlife issues in this country, whether it’s koalas or whatever, it’s all tied into habitat issues. That’s it, bottom line.”

Other obstacles to their continued existence include environmental policy lag and legal loopholes. Policy protections are not keeping pace with environmental destruction, while those that are in place are ineffective, underfunded or prone to loopholes in the law that can be used to navigate around them.

The wheels of bureaucracy turn slowly in the curious case of the koala. The 1998 National Koala Conservation Strategy has been in place for 15 years, outlining all of the issues detailed in this article and more. But instead of alleviating the koala’s troubles, the population has crashed.

If they’re to be at all useful, the new listing and the old National Koala Strategy will need to be subject to scrutiny, regulation and provide tangible benefits for koala conservation.

However beautiful the strategy, you should occasionally look at the results – Winston Churchill

“The listing alone will not save the koala,” relates Melzer. ”It’s basically a label that says we’ve got to a point where koalas are in serious trouble and need careful management if they’re going to survive.” He called for a koala report card to follow the progress of populations and their habitat over time.

However disheartening its current circumstance, solving the koala’s dilemma is not that complex. According to Melzer, “koalas are the easiest animals in the world to conserve, you just have to account for them.”

Though often called the koala “bear,” this cuddly animal is not a bear at all; it is a marsupial, or pouched mammal. After giving birth, a female koala carries her baby in her pouch for about six months. When the infant emerges, it rides on its mother’s back or clings to her belly, accompanying her everywhere until it is about a year old.

Koalas live in eastern Australia, where the eucalyptus trees they love are most plentiful. In fact, they rarely leave these trees, and their sharp claws and opposable digits easily keep them aloft. During the day they doze, tucked into forks or nooks in the trees, sleeping for up to 18 hours.

When not asleep a koala feeds on eucalyptus leaves, especially at night. Unless there’s drought conditions or heat waves, koalas do not drink much water as they get most of their moisture from these leaves. Each animal eats a tremendous amount for its size—about two and a half pounds (one kilogram) of leaves a day. Koalas even store snacks of leaves in pouches in their cheeks.

A special digestive system—a long gut—allows koalas to break down the tough eucalyptus leaves and remain unharmed by their poison. Koalas eat so many of these leaves that they take on a distinctive odor from their oil, reminiscent of cough drops.

These plump, fuzzy mammals were widely hunted during the 1920s and 1930s, and their populations plunged. Helped by reintroduction, they have reappeared over much of their former range, but their populations are smaller and scattered. Koalas need a lot of space—about a hundred trees per animal—a pressing problem as Australia’s woodlands continue to shrink.

Australia's Koalas: Threatened By Urban Sprawl, The Marsupial Struggles To Survive (PHOTOS)
Will Australia Save Its Koalas? 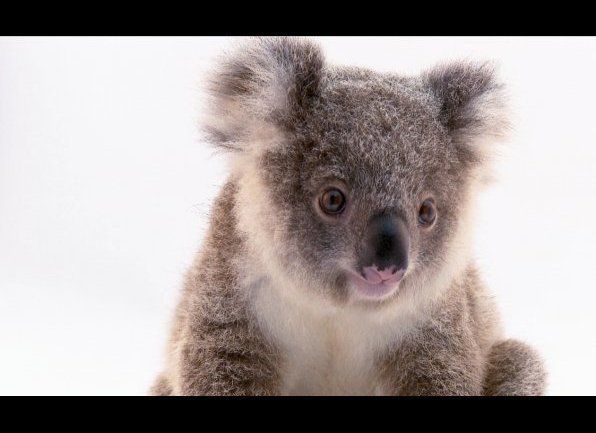