The red dirt in central Australia might be a close mimic for the red surface of Mars, suggests research that sheds light on how opals formed in the land Down Under.

Precious opal is Australia’s national gemstone. Both precious opal and common opal are made of amorphous spheres of silica 150 to 400 nanometers or billionths of a meter wide, but in precious opal, these spheres are arranged in highly orderly arrays, resulting in scintillating colors.

The main source of the world's gem-quality opal is the red dirt of the Great Artesian Basin in central Australia, one of the largest continental basins on Earth. Precious opals have been mined there for more than a century, where they occur just within 165 feet (50 meters) of the surface. 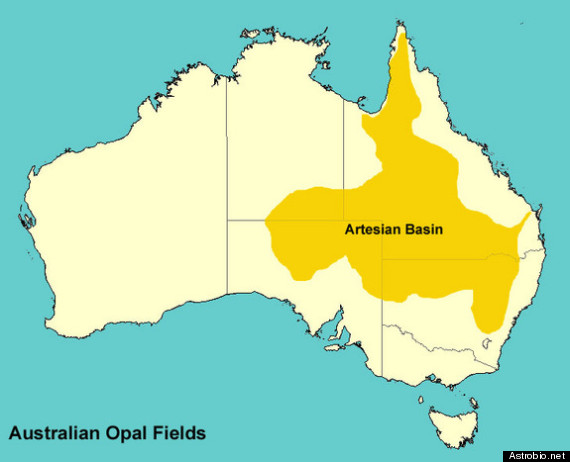 It was long a mystery why precious opal formed at relatively shallow depths in central Australia, and why it could be found abundantly there yet almost nowhere else on Earth. Now geologist Patrice Rey at the University of Sydney in Australia finds precious opal in the red center of Australia may have formed due to conditions much like those seen on the surface of the Red Planet.

"The opal miner community was very helpful," Rey said. "Opal miners provided access to opal mines as well as countless samples, and this is a very keen audience, genuinely interested to learn more of opal." [7 Most Mars-like Places on Earth]

Rey was a schoolboy in southern France when Australia appeared to him through his black and white TV, he recalled. The show was a documentary about opal mining Down Under, starting his fascination with Australia.

"I was 14 years old when I wrote to the Australian embassy in Paris to get documentation to migrate to Australia," Rey said.

After coming to Australia as a scientist, to learn more about how opals formed in central Australia, Rey modeled three decades of research on the evolution of the Great Artesian Basin and its surroundings. 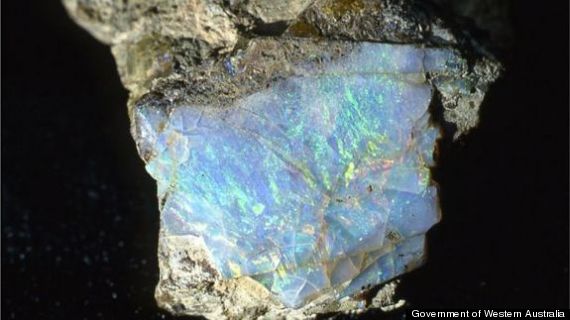 Precious opal found in the Williams opal mine near Coolgardie in Western Australia.

The Great Artesian Basin was once filled with the Eromanga Sea, a shallow, cold, muddy, stagnant body of water that at its peak flooded 60 percent of Australia. Rey discovered the formation of Australian opal was apparently due to an extraordinary instance of acidic oxidative weathering during the drying out of the central Australian landscape that followed the retreat of the Eromanga Sea from the basin starting about 100 million years ago. Such acidic oxidative weathering over a large region is unusual on Earth — the planet's surface is usually loaded with carbonates that neutralize acid — explaining why opal is rare elsewhere near Earth's surface.

Acidic oxidative weathering has also been seen on the surface of Mars, Rey said. In addition, the red planet shares a number of other features with the Great Artesian Basin. "Similar rocks, similar flooding then drying out history, similar mineralogy, same color," Rey said. "This story shows that space exploration helps us to understand better our own planet."

All in all, the red center of Australia could be among the best matches on Earth for the surface of the red planet.

"It costs billions of dollars to send rovers and orbiters to Mars," Rey said. "Therefore, looking right here on Earth for ancient and modern analogues to Mars' environment is key to carry on research in greater detail and explore the role biology has in weathering processes."

The weathering Earth's surface experiences is affected by biological processes — for instance, by so-called "iron bacteria," which can live off iron and thrive in acidic conditions.

"These microbes are some of the most primitive micro-organisms," Rey said. "It is very likely that these iron bacteria were present in central Australia, contributing to weathering processes. If this is correct, we could look in central Australia for biological proxies of ancient microbe colonies and better understand these ecosystems for comparison to Mars environments. In central Australia, these putative ecosystems went through wet and reduced to dry and oxidative environments. Evolution of these colonies could offers clues about what to expect and what to look for at the surface of Mars."

Over the past decade, opal mining has slowed considerably in Australia due in part to the lack of discovery of new opal fields, a slowdown that has accelerated the decline of many townships. These new findings regarding the geological origins of opals could help guide discovery of these precious stones.

"Precious opal is still part of the economic fabric and cultural identity of many remote townships in central Australia," Rey said. "The livelihood of thousands of families depend directly or indirectly on precious opal."

Rey detailed his findings online May 22 in the Australian Journal of Earth Sciences.

This story was provided by Astrobiology Magazine, a web-based publication sponsored by the NASA astrobiology program. Follow SPACE.com on Twitter, Facebook and Google+. Original article on SPACE.com.