When I was a young lad my dad, a successful attorney and entrepreneur, taught me "your word is your bond." In the early 1990s I cut my teeth in Professor Emeritus Roger Sands tree physiology laboratory at Melbourne University. There I learned excellence in science and sharpened my systemic skill set.

Like many Australians, I am shocked at what the Coalition has done to the environment and in particular the abysmal performance of the Environment Minister Greg Hunt -- whose word clearly is not his bond as evidenced from this report card. 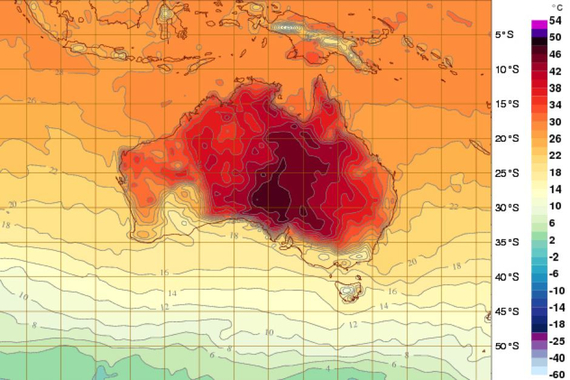 Australia experienced the hottest spring on record and on January 2, 2014 South Australian temperatures were in excess of 120 degrees (F).

Within hours of Tony Abbott becoming prime minister, the Climate Commission was cancelled. This incongruity occurred in the face of Australia's hottest spring ever recorded, the worst NSW drought on record, Super El Nino's predicted to occur at least twice as much in the near future, and the global telltale of an irrefutable warming world -- Western Antarctica loosing billions of metric tons of ice each year so much so that the mantle is being nudged eastward beneath Eastern Antarctica. 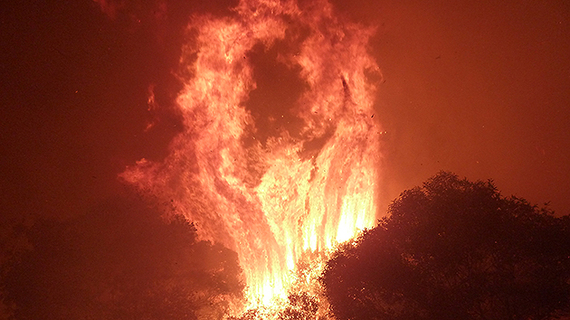 Bushfires in Australia are burning hotter and moving faster across the landscape than scientists have ever recorded. Furthermore, intense droughts beget more and more deadly wildfires across the nation.

All ecological indicators across Australia vividly show the severity and brutality of global warming i.e. prolonged droughts that beget bushfires and record-breaking floods. Amidst all of this the Coalition who overtly represent carbon-polluting interests are rescinding Labour's Carbon Tax. 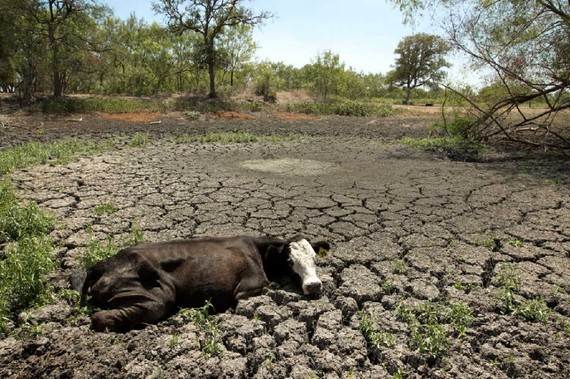 Droughts are plaguing a warming world and livestock as well as vegetation have no chance of survival without the life blood of Earth -- fresh water.

Concomitantly, the Galilee Basin, the largest coal deposit on the globe, was green-lighted to expand by razing 17,600 acres of the Bimblebox Nature Refuge - a spectacular ecological jewel for a cash infusion of $6 billion and a promise of creating 6,000 jobs. This behemoth mine will rival only the grotesque despoiling of Alberta's exquisite boreal forests for its oil sands, contaminating fresh water and imprinting a colossal carbon footprint thereto killing our biosphere. 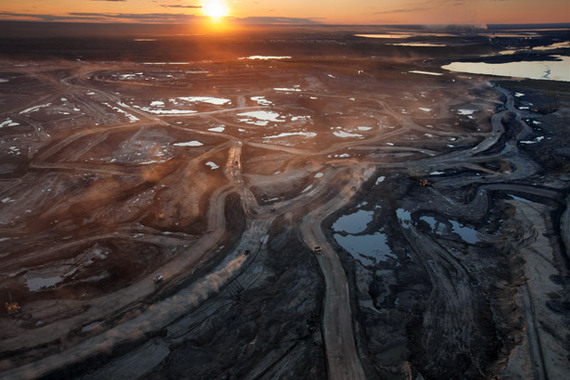 The unquenchable addiction to petroleum has lead to a massive development in northern Alberta, which extracts gooey bitumen from sand deep within the earth requiring mega amounts of steam energy.

The horrendous environmental degradation in western Queensland far from ends in the Galilee Basin. In yesteryears, the Environment Minister at least purportedly took a modicum of pride in protecting the environment. So far this cannot be said of Hunt's portfolio. 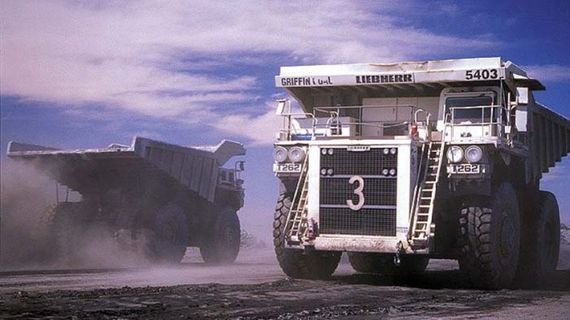 Seventy-two percent of the Great Barrier Reef, a UNESCO World Heritage Site, is dying. The oceans are acidifying faster than the previous 300 million years due to escalated carbon pollution of in excess of 85 million metric tons, daily. And as the oceans attempt to digest about 33 million metric tons of carbon dioxide daily the byproduct is greater ocean acidification. Very recently researchers from the Australian Institute of Marine Sciences in Townsville added shrimp and crabs to the list of sea urchins, sea stars, sea snails and mussels doomed from rising carbon dioxide. One might assume that an Environment Minister would take all necessary precautions to protect this stunning Australian Reef that is easily comparable in biodiversity to that of the Amazon rainforests especially since it is loaded with potent cancer-fighting medicines. In addition, the Reef provides 50,000 ecotourism jobs and hundreds of millions in revenue for the crown. 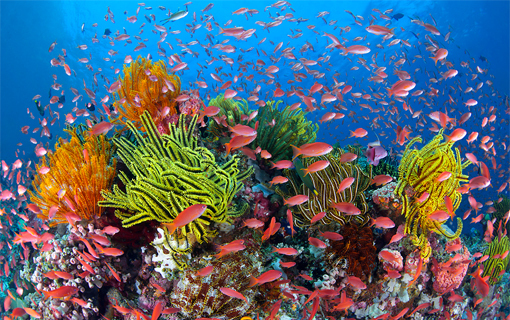 The Great Barrier Reef is an exquisite hotbed of life chocked with a rich array of biodiversity, which is crucial to the health and well-being of our oceans. Infuriatingly, it is dying quickly

Instead, Hunt has unconscionably hastened the ransacking of the Reef. In order to create six new super coal-tanker ship berths at Port of Abbott Point, 3 million metric tons of dredging has recently been authorized. Rather than alleviating the pending destruction of the Reef from dredging by building jetties to move the boats deeper into waters -- as a government study clearly recommended. (And by the way, dumping dredging is in no way ecologically similar to silt carried by rivers through fabulous filtering estuaries that empty onto the Reef.) Inexplicably, Hunt chose development over protecting his portfolio, the environment. 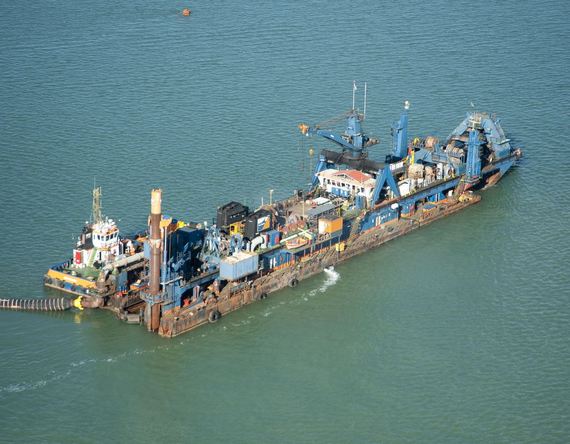 Harbor dredging creates massive toxic plumes of silt; it also generates pernicious noise pollution, which prevents all forms like Byrd whales or coral clown fish on the Great Barrier Reef from feeding. Currently, both the Queensland and Federal governments have failed to impose any underwater noise regulations upon industry. Moreover, Environment Minister Greg Hunt has failed to protect the Great Barrier Reef from dying quickly.

Australia will ramp up its coal production by five fold to a whopping 240 million metric tons per annum eclipsing its nearest coal production rival Indonesia, as it rushes to feed the insatiable demand from both China and India. Tragically, methyl-mercury a byproduct from burning Australian coal in China is now showing up off the shores of California in our blue whales at off the chart levels never witnessed before by my colleagues.

Australians love whales. Whale watching is a lucrative and burgeoning ecotourism industry. When Hunt was in opposition for six years, he claimed that the whales in the Great Southern Ocean would be protected in his environment portfolio. 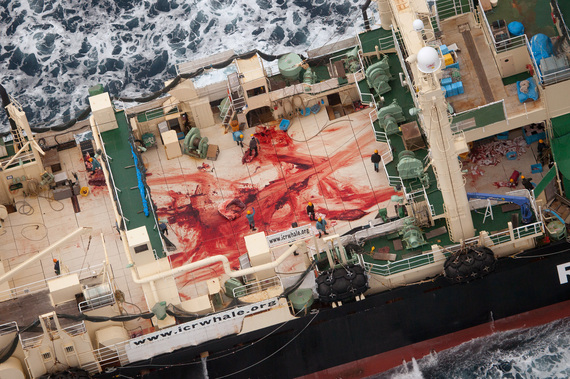 On January 5, 2014 the Japanese ocean-killers murdered 3 minke whales and Sea Shepherd Australia captured their illegal activities on camera as witnessed by the bloodied deck of the Nisshin Maru, stained from their heinous butchering of these magnificent sentient creatures.
Photo credit: Tim Watters / Sea Shepherd Australia

Why is the $150 million Oceanic Protector Customs ship stationed at Christmas Island not heading south to ensure that Japan does not slaughter whales within the 200-mile territorial Australian Antarctic zone? In its place, Hunt favored an A-319 aircraft staffed by Customs officials to occasionally fly south and inspect the illegal Japanese poaching fleet from afar. 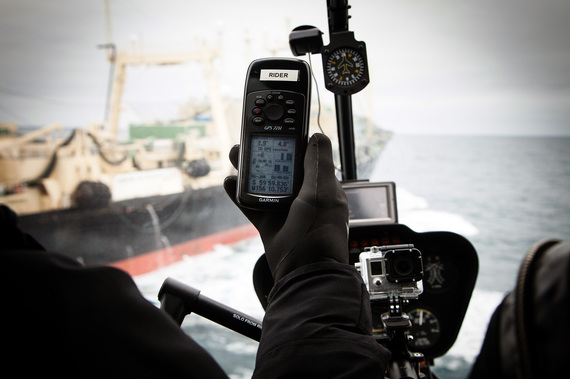 The chairman of Sea Shepherd Australia Dr Bob Brown succinctly summed up Hunt's failure to honor his word to protect the whales, "plane copout." Moreover, "Sea Shepherd Australia is now left alone to do the governments role of enforcing Australian International Law in the Antarctic Region," said a purposeful Brown. 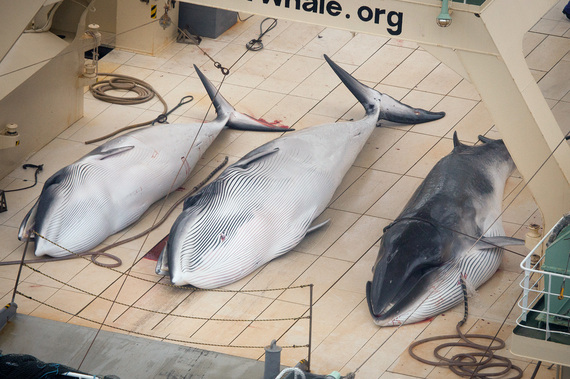 Our children's legacy is the biosphere. It is being plundered faster and harder in Australia (and around the globe) than ever before. Not only does Minister Hunt receive an egregious 'F' on the Environment Report Card for his first 120 days; he will be left to explain his deleterious legacy to generations of Australian children.

Earth Dr Reese Halter is a broadcaster, biologist, educator and author of The Insatiable Bark Beetle: A Harbinger of Global Warming.