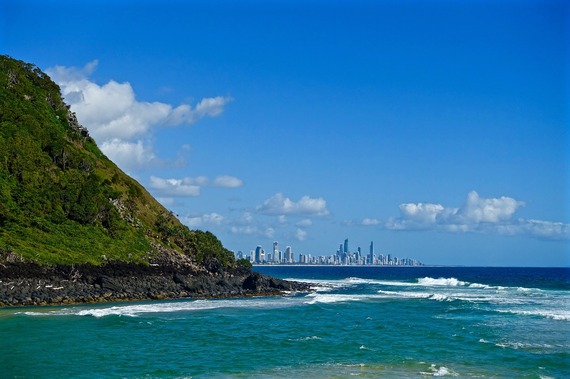 As a Gold Coast girl, practically from birth, you'd think I'd be immune to its glitzy, coastal packaging. But, the truth is that I'm still overwhelmed by the sheer force of energy that radiates from the beaches, rainforests and trendy micro hubs of culture.

Yes, that's right - culture. You may not believe it, given the tacky nightlife of Surfers Paradise, increasing high-rise jungles and plastic surgery-enhanced locals that often advertise my home town, but unearthing it is half the fun.

The Gold Coast is certainly wrapped in sparkly paper with too many sequins, revealing bleached-blonde hair, boob jobs, Botox, bikinis and a few too many real estate agents under the first layer. It's only when you peek below the next one, that the town shows its kaleidoscope of options.

Each slice of white-sand beach has its own local flavour and you can pick one to suit your mood, much the same as ice cream. If you want a flavour that's rich, but understated, Main Beach is for you. The wide stretch of pristine sand runs along a shady park and you only have to walk a couple of blocks to Tedder Ave, for fine dining and resort-wear central.

At nearly any time of the year, Surfers Paradise beach shines with entertainment along the foreshore, weekly markets and an endless array of locals and tourists parading the latest swimwear across the sizzling pavements. 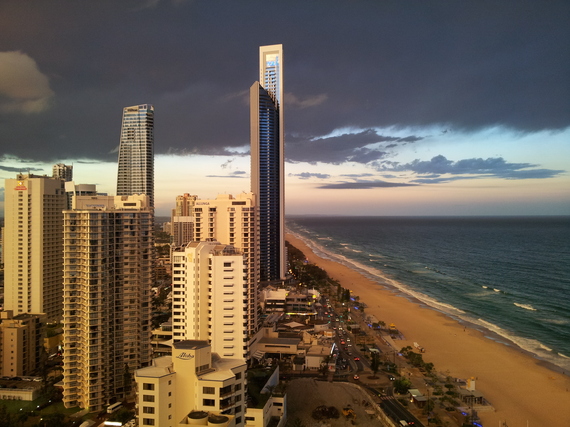 If that's not your thing, Nobby Beach is the home of the hipster, with edgy cafes, bookshops, yoga classes and a stretch of luxurious homes right on the sand. Miami Beach nestles into a lush headland, with a barbeque-filled park, a popular pub across the road and grassy patches for chilling out with a picnic.

Further up at the next headland, Burleigh Beach is a photographer's dream and a surfer's playground. Giant pine trees stand watch over family outings in the park, diners sip wine in oceanfront restaurants, couples pash on Burleigh Hill and the James Street shops swell with treasure hunters.

Peace and quiet is still an option in Palm Beach, with a distinct, laidback vibe, surf club on the sand and a dress code that really only includes havaianas and swimmers. Though you'll fight for a spot on the sand, the water at Tallebudgera Creek, just past Burleigh, is as clear and blue as you're ever going to swim in.

Currumbin Beach boasts elephant rock and one of the most spectacularly positioned surf clubs in the country. Currumbin retains a village feel, with bohemian shops, cafes and parks at the foot of rainforest and mansion-covered hills. Next up is Kirra Beach, where the coastal walkway extends to a lookout of the high-rise covered arc from Surfers Paradise.

You can walk from there, into Coolangatta, home of the Quicksilver Pro, Cooly Rocks On 50's and 60s festival and exquisite coastal treks around Greenmount Headland. The vibe in 'Cooly' as we locals call it, is always a holiday one, with a splash of edgy creativity from a thriving arts and culture scene.

If you're a traveller with a buffet mindset, beach-hopping is the way to go on the Gold Coast to experience the city at its best. And one last thing - if you're driving, just remember that Meter Maids don't actually put money in the meters.

Voting Made Easy
Register to vote and apply for an absentee ballot today
Register now
More:
gold coastHolidaysBeachesAustralia travel
Newsletter Sign Up
An essential daily guide to achieving the good life
Subscribe to our lifestyle email.
Successfully Subscribed!
Realness delivered to your inbox