Wainhouse became involved when the first translation by Baird Bryant, a member of the Merlin literary group, was poorly done. Réage was outraged.

Girodias, under pressure from Pauvert and Réage hired Wainhouse, who had already translated the Marquis de Sade. Wainhouse was also an editor of the Merlin literary magazine, which included their leader Alexander Trocchi, Richard Seaver, Christopher Logue and Patrick Bowles.

In 2011, new information surfaced about the "anonymous" translator.

From his seventeenth birthday until 2000, Wainhouse, who was a Harvard graduate, kept detailed journals. In 2014, he died after a long illness. Prior to his death, his wife, Deborah Clayton Wainhouse, known affectionately as "Silver" Wainhouse, introduced me to Austryn and shared his journals with me. 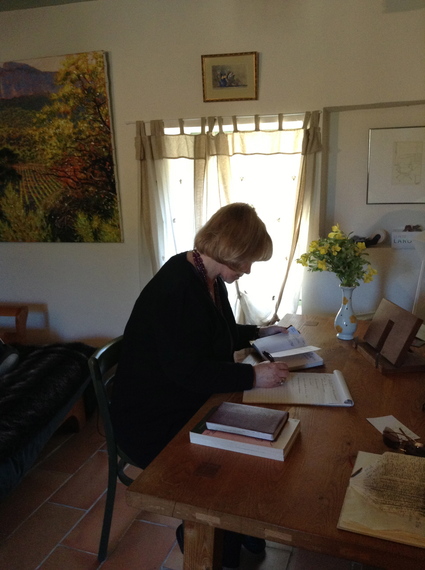 On February 5, 1957, one day before his 30th birthday, Wainhouse began the second English translation of O. The work was "exhausting and slow."

He was paid 90,000 francs or approximately $250 dollars by Maurice Girodias, who published it in his Traveler's Companion series, which featured DB's or dirty books, risqué titles and sexual content. Wainhouse noted the work done by Bryant.

His journals also describe his translation work with numerous other prominent writers such as the Marquis de Sade, Jean Cocteau, Pierre Klossowski, Simone de Beauvoir and Georges Bataille. In 1972, Wainhouse won the National Book Award for his translation of Jacques Monod's Chance and Necessity.

For most of his work, Wainhouse used his own name. For the more controversial pieces, such as his earlier translations of the Marquis de Sade's One Hundred and Twenty Days of Sodom, he used his pen name Pieralessandro Casavini

In 1955, pressure to improve the translation and identify the author increased after O won the Prix des Deux Magots, a small but prestigious literary prize.

France's vice squads seized copies of O and questioned Pauvert, Girodias and Jean Paulhan about the identity of Réage. Neither they nor Paulhan, the highly respected editor of Gallimard, who brought the novel to Pauvert, revealed that Dominique Aury or Anne Desclos, (she had two names), was the real author. Aury was also questioned.

Paulhan, who had written the erudite preface to O, had an additional secret. Aury had written O as a series of love letters to him as a ploy to keep him from straying to younger women. Paulhan, who was an admirer of the Marquis de Sade, was intrigued by her sensual letters, which depicted a female version of the Marquis de Sade's themes of bondage and sexual perversion. (And indeed, some claim Fifty Shades of Grey, is a modern interpretation of O).

The Wainhouse edition also had some problems.

In order to thwart the American censors, Girodias changed the title to The Wisdom of the Lash. When the preface by Paulhan was deleted, Girodias blamed it on a drunk printer.

Another change directly affected Wainhouse. The translator was listed as "Anonymous." Was this deliberate, perhaps to avoid paying future royalties, or was it by mutual agreement?

Wainhouse, who wasn't a French citizen, had serious personal concerns. He didn't want to be deported back to the United States, where Joseph McCarthy's senate committee was prosecuting writers and the Korean War was drafting young men. Nor did he want to embarrass his father, who was an American diplomat.

"Anonymous" gave him protection. For many years, "Anonymous" also caused him not to be recognized for one of his most important works.

The questions regarding the translations of O did not stop there. In 1963, Pauvert sold the English rights to Barney Rosset at Grove Press. Pauvert insisted that there be a new, third translation. By this time, Seaver from the Merlin group and a co-translator with Wainhouse on Sade's works, was an editor for Grove. In this capacity, he said he hired Sabine d'Estrée for the third translation. St. Jorre was suspicious and felt Seaver had done it, which Seaver continually denied. The third edition received an excellent review from the New York Times.

Seaver's memoir, The Tender Hours of Twilight (2012), confirmed that while Bryant's French was "limited", the second translation "was much better." Seaver and Wainhouse corresponded about O in 1965, but "Anonymous" was not identified.

Following Seaver's death in 2009, Jeanette Seaver, confirmed that her husband was Sabine d'Estrée, the third translator for O.

In 2013, Wainhouse's archive, which contains his journals, photos, letters and contracts, was placed in the Syracuse University Special Collections Library. Between 1967-1987, Richard Seaver's Grove Press materials were also placed there. Together they provide a valuable history of publishing in the 1900s.

Wainhouse, who had a goal of translating 10 pages a day, wrote "I detest the book." His negative view did not slow him down. He completed O in eighteen days.

References and notes are located at www.pariswriterspress.com. See Interviews and Articles