Pregnancy didn't come easy to me. I had three miscarriages before being able to carry my son, and the experience of having someone else share my space and body so intimately sent me into constant sensory overload. I didn't know that's what it was at the time, however.

From the beginning, my son did everything when he was good and ready. I respected that and waited 41 weeks and four days before he decided to vacate my womb finally. He screamed when restrained in a car seat. I saw him as an independent spirit that could not be tamed. I saw him as willful and strong, inciting us to never be able to put him down lest we get an earful of screams once again. From birth, he was free to express his desires and preferences.

Watching him develop brought back memories of my own childhood, and I started to see a lot of similarities. I also seemed to have much more of a sense of what he was going through than others did, beyond regular "mom intuition." I started to read writings by autistic adult females and started to see a lot of myself in them. Finally, about a year and a half after my son was diagnosed with ASD and SPD, I received the same diagnosis. As my son would say, "We're both the same!" 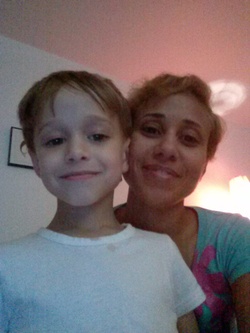 My diagnosis was a rebirth and a relief. I no longer had to keep up the charade of being constantly in control and capable. I always thought that because I did not have the same amount of energy as others, or because I suffered from inexplicable anxiety, it was because there was something wrong with me. Suddenly, I understood it was because I was so overloaded by my senses and fighting myself so hard to "be normal" that life was simply exhausting. Diagnosis gave me an opportunity to cut myself some slack. It allowed me to relax. It allowed me to ask for help. It allowed me to be authentic and accept myself. Not flawed, not bad, not weak, just different.

My son has a wonderful advantage having an autistic mom. I let him stim to his heart's content. As opposed to the stifling and strict way I was raised, where I had to conform to others' expectations all the time, he is growing up free to flap, jump, hum and sing as he pleases. I talk him through his own anxiety and teach him coping skills I never had as a child. I don't force him to do things until he is ready, and he is good at letting me know when he is or isn't. His interests are supported and encouraged, rather than restricted or harshly judged, like mine were.

I "get" that sometimes we autistics, no matter how normally articulate, lose our words. Sometimes we say "yes" when we mean "no." I get that we get tired from social activities and may need days to recover. I get that we can't always make adequate eye contact. I get that we become intrigued and fixated on all sorts of things, constantly hungry for knowledge, mastering a subject completely before moving on to the next. He is free to be himself the way I wasn't until my 30s, and if it weren't for him, I may never have been given the gift of diagnosis. Allowing him to be himself -- free, proud, and authentically autistic -- is the best gift I can give him in return.