Some kids dream about becoming an astronaut or a ballerina ... or perhaps a pro ballplayer or a famous singer.

Not Kirk Demarais. Nope, as a kid, his only goal was to buy all the junk sold on the back pages of his beloved comic books.

In retrospect, his dream was probably more realistic than his classmates. And now, Demarais has turned his quest for the ultimate novelties into "Mail Order Mysteries: Real Stuff from Old Comic Book Ads!", a book that recaptures his lost childhood by testing all the stuff that caught his fancy as a kid.

It's the culmination of a 31-year-old dream for the 37-year-old illustrator and designer from Siloam Springs, Ark., who spent five years searching for some of the products.

"I got my first comic book, "Micronauts, No. 9," in 1978 or '79 when I was in first grade," he told HuffPost Weird News. "I couldn't really read the book so I was more interested in the ads for things like the package of 101 soldiers or 'Grit' magazine and, of course, the X-Ray Specs."

Sadly, there was an obstacle to Demarais' dream: His father.

"As a kid, I wasn't allowed to buy any stuff from a comic book," he lamented. "My Dad thought it was a rip-off."

Finally, he gave in to those base impulses.

"As soon as the Internet became available, I started searching X-Ray Specs," he said. "In fact, I started trying to buy all the stuff I saw in the comic books -- and this was even before eBay. Even before I had a book deal."

Demarais says he added up all the items in the book at their original prices -- including the giant cardboard rocket ship that cost $4.98 in 1965 -- they would have cost around $325 (plus shipping). But since many of those items are only available to collectors these days, the current worth is closer to $7,000, including $2,995 for that cardboard rocket ship.

"I don't own every item in the book," he said. "My personal collection is closer to $3,000. The most expensive item I was going to buy myself was the U-Control 7-foot lifesize ghost, which promises to be a remote-controlled, seven-foot-tall ghost for only 95 cents. These days, they are very rare and I got into a bidding war over it on Ebay. It got up to $365, at which point I lost, but it turns out I knew the guy so I was able to test it and get it in the book."

It sounds like fun for kids of all ages, right? But Demarais says the reality was different.

"It was nothing I couldn't have made myself. Basically, it's a balloon featuring the decidedly unscary Casper the Friendly Ghost, a spool of fishing line and a trash bag," he said.

It turns out that Demarais' dad was right all along: Most of the too-good-to-be-true items found on the back of 1970s-era comic books were crap.

"The vast majority are rip-offs," he conceded. "About 85 percent, I'd say. As a kid I would have been devastated, but now I enjoy the rip-off. It's funny to play the rube -- and I actually hope the items are smaller and flimsier than advertised."

But what about the quintessential comic book novelty -- the X-Ray Specs?

The ads as they originally appeared made it seem like the $1 glasses would enable the wearer to see real skeletons and nudity, but the reality is something more birdbrained: Eyewear with bird feathers stuffed between the cardboard layers of the lenses.

According to Demarais, the feather’s vanes diffract light, creating the appearance of two offset images. A darker area forms
where the images overlap, which can be interpreted as the bones in your hand or the curves of a lady.

"If I had gotten that as a kid, it would have been a real blow," he said. "On the other hand, things like the cardboard rocket would have caused disappointment as well, but there I would have ended up playing with them."

For his money, the remote controlled hovercraft is the most satisfying item he purchased for the book.

"It actually does float," he said.

Sadly, floating is something that happened to the two batches of sea monkeys he attempted to raise with his son.

For the record, sea monkeys are also one of the most notorious comic book scams of all-time. Basically brine shrimp, they were sold as "sea monkeys" in comic books in ads that featured large cartoon renderings of a vaguely humanoid sea monkey family, including a shapely mother figure with blue skin and antennae.

The ads made it sound possible to become the lord of a whole colony of oceanic creatures who would do your bidding.

The reality: They were brine shrimp that didn't do much. Especially with Demarais' touch.

"You can buy them at Walmart these days," he said. "My five-year-old son and I tried to get them to grow and we killed two colonies. We also planted Venus Fly Trap seeds and got nothing."

Well, they got a teachable moment. For while Demarais is recapturing his childhood innocence ("There's a part of me that never grew up," he admitted), his book caused his son to lose his.

"Yeah, he is aware of things not being what they are," he said. "There's a whole table of this stuff in Daddy's computer room that proves it. Ultimately though, this book -- although it's meant to be fun -- illustrates the difference between our expectations and the harsh realities of life."

Still, while Demarais tried to put all the comic book novelties, he admits he wasn't able to do one of them.

"There is a handbook called 'Deadliest Fighting Secrets' that was big in the 1970s and one of the tips is to gouge out your combatant's eyes by sticking your thumbs in the sockets," he explained. "Since I wasn't able to do this for the book, I have to admit the results are inconclusive." 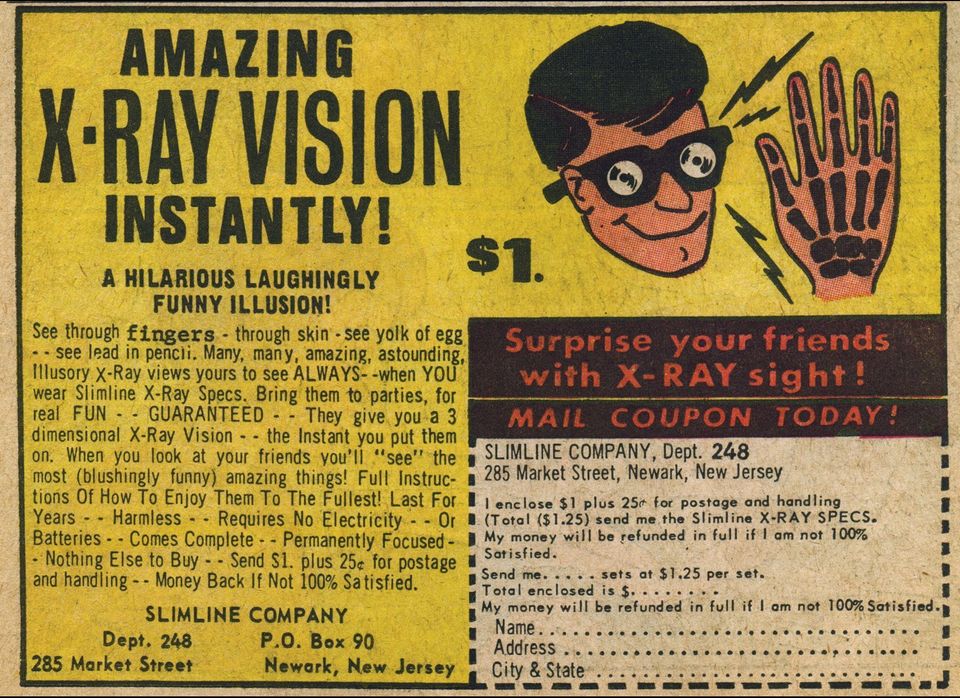 1 / 12
The Truth About Mail Order Mysteries Revealed!
As a child, Kirk Demarais would see ads like this in comic books for X-Ray Specs and wanted to spend his hard-earned money to buy them, but his dad wouldn't let him because they were supposedly rip-offs.
Courtesy of Kirk Demarais