The National Park Service turns 100 years old on August 25th. And while the parks saw more than 290 million visits in 2014 -- a record -- fewer young people are visiting, according to one report. The typical visitor to Yellowstone is age 54, and to Denali, 57. Meanwhile the number of visitors under age 15 has fallen by half.

In addition, people of color are underrepresented in both the parks and outdoor adventure, according to James Edward Mills, a journalist and author who has spent decades exploring and celebrating the country's wild and scenic places. Mills is a one-time guide, outfitter and now freelance writer who covers active lifestyles and environmental conservation for publications as well as his own site and podcast, The Joy Trip Project.

Over the years, Mills continually found he was the the only person of color involved in his adventure activities, either professionally or recreationally. That experience inspired him to write "The Adventure Gap: Changing the Face of the Outdoors," which follows the first all African-American team to attempt a summit of Denali, the highest peak in North America.

Part adventure narrative and part history, the book examines why people of color are under-represented in outdoor recreation, and profiles significant historical achievements by minorities in adventure and exploration. Mills also co-produced an award-winning documentary on the Denali attempt, called "An American Ascent." I recently spoke with Mills about his book, and why encouraging young people of color to participate in outdoor recreation is so important for the conservation movement.

How do you define the 'Adventure Gap' and what has caused it?

The Adventure Gap is the distance between people who spend time in the outdoors and people who don't. Like many of the cultural disparities in our society, that falls clearly along racial and socioeconomic lines. There have not always been safe places for African-Americas to recreate freely in this country. The history and legacy of slavery was immediately followed up during the period of Reconstruction with Jim Crow laws that restricted the movement of African-Americans. Then you get to the housing discrimination era of the late 1960s all the way to the 1980s, where there were practices by which people of color were limited in where they could get mortgages for homes. It really has only been within the last generation that there has been free and open access to places to recreate safely.

A lot of people will argue that the outdoors have always been free and open to everyone. But when you have the fear of who you might encounter in wooded areas in this country, and what they might perceive as your place or role there, a lot of people restrict themselves to cities or foreign countries where there might not be as much discrimination -- where you see more people of color that frankly just don't stand out.

But as you write in your book, this wasn't always the case.

Through the course of my research I found many wonderful stories about African-Americans in particular who were on the cutting edge of the modern adventure movement, going back to the creation of Yosemite National Park in 1903. President Theodore Roosevelt sent 400 African-American soldiers, members of the famed Buffalo Soldier Units of the 9th and 10th Cavalry Regiment, to become ostensibly the first national park rangers. They were patrolling the parks [for poachers, illegal logging and wild fires] and doing many of the same jobs the park rangers do today. Ironically, today there's only one permanently stationed African-American park ranger at Yosemite.

In 1909, an African-American named Matthew Henson was with Robert Peary [on the first successful expedition] to the North Pole. It could be argued that because he was in the first sled, it was Matthew Henson who was the first person to make it to the [northernmost] point on the planet. But because of his race he wasn't given credit for that accomplishment until almost 50 years after his achievement.

I think it's really important that we tell these stories so people know there is indeed a place for them that is granted not only in their rights as citizens, but also in their cultural heritage as people who were actively engaged in this work at the very beginning. 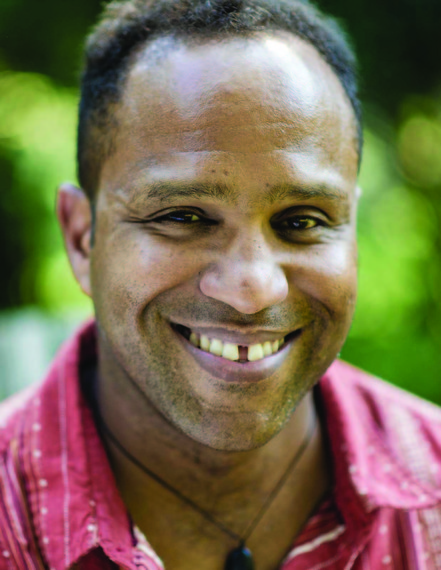 What is at stake with the Adventure Gap from a conservation perspective?

Part of the urgency in this whole conversation is that our nation is undergoing a demographic shift. The U.S. Census has predicted by the year 2042 there will be a majority of people of color in the U.S. If you take a look at who spends time in the outdoors, currently a majority of those people are white. If that doesn't change along with the demographic shift, we could find ourselves in a very delicate place, where a majority of the population will not have an affinity with the natural world or the preservation of wild and scenic places. We'll see a priority shift in how we allocate federal funds for the protection of wilderness, and a priority toward an extraction economy as opposed to a conservation economy.

Why did you choose to focus your book on the first all African-American team to attempt a summit of Denali in Alaska?

The idea was to tell the story of people of color actively engaged in the modern adventure culture that includes high-altitude mountaineering. If you think metaphorically about what it means to get to the highest physical point in North America, that's basically saying there are indeed no places you cannot go, regardless of who you are or where you come from or what your ancestry or heritage is.

I attended a recruiting meeting for the Cub Scouts when I was nine years old in [Los Angeles]. From the time I was nine until I graduated high school, I [spent] literally every month doing all kinds of amazing outdoors adventures, from cycling to rock climbing to skiing to snowshoeing to winter camping. I really wanted to be directly involved in outdoor recreation [professionally], so having graduated from the University of California, Berkeley, with a degree in anthropology, I took a job working for a [recreational equipment] company and ultimately got involved in adventure travel and outfitting, and in 2003 became a journalist and media producer.

What's the most exciting adventure you've done in the outdoors as an adult?

Last summer I had the chance to visit five national parks in Tanzania, Africa. I visited Ngorongoro Crater, the Serengeti and spent time with the Maasai people. I shot [photographs of] elephants in the wild, and giraffes, zebras, ostriches, lions and hyenas. It was really a penultimate cultural and travel experience for me. More than anything else it gave me a real appreciation for why national parks are such a great idea -- to set aside and preserve wild and scenic places for the pleasure and enjoyment of people everywhere.

What's one thing you know now that you wish you knew growing up?

I'm going to be 50 this year; I think when I was in my 20s, I probably believed that by the time I was this age I wouldn't have much more to look forward to. But today I look forward to doing all kinds of things. I wish I had known I [would have] a lot of years ahead of me. I was in a rush to get things done and make things happen.

Now that you are 50, what's one rule you feel you can break with impunity?

What ignites your creativity?

My creativity is based on what's happening in the world around me. The world is changing, there are species going extinct every day, our climate in changing, there are physical places on the planet that are markedly different than 100 years ago. My primary purpose in creating these stories is to encourage everybody to do what they can now to be active, engaged and involved in adventures, and find out what they can do to make sure the things we enjoy today will be preserved for future generations.

What's your idea of perfect happiness?

Being able to find pleasure and commitment in the present is where I find happiness. It's being able to take a deep breath and say, 'this is the way things are, this is who I am in this moment and I'm going to do everything I can to make the best of what I've got.' Happiness isn't terribly elusive at all. It's right at your fingertips if you have the ability to recognize your place in the world and how you can make the most of it.

Mills will be discussing his book and adventures on June 4th from 3 to 5pm at the Forest Avenue Library in Des Moines. Click here for more information.