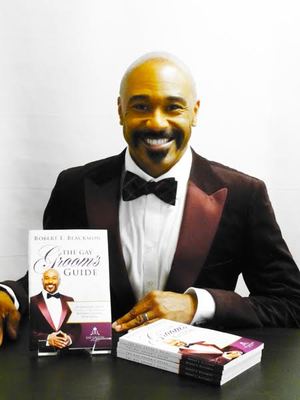 ​Weddings are beautiful celebrations that are a testament of the power of tradition, family, commitment and love. But anyone who has ever planned a wedding without the help of a wedding planner will tell you that the process is confusing and can be downright frustrating. As brides, we are overwhelmed with infinite resources that tell us what type of dress we should buy for our body types, how to order a cake and seat our guests and how in what time-frame we should send out our invitations and thank yous... but what about the grooms? And more specifically, what about gay grooms?

In my research to answer this question, I stumbled upon the most unique and groundbreaking book written about weddings in the last 10 years: The Gay Groom's Guide To Planning Your Perfect Wedding: (Without Losing Your Mind) by Robert E. Blackmon. With the shifting zeitgeist, more and more men, both gay and heterosexual, are getting involved in the wedding planning process; however, very few resources have been created that address the pertinent issues that men face while wedding planning. Blackmon felt that the most difficult part of planning his wedding was that, "Everything was about the bride, the dress and the veils... There was no stuff for guys." This book was created out of that need and is the most comprehensive of it's kind.

Robert, a Detroit native, is no stranger to success or hard work. He paid his way through college by designing dresses and went on to become a well-known name in Hollywood. He started his career with an internship at Paramount Studios. That opportunity eventually lead him to work in front of the camera as a correspondent for the show EXTRA, where he conducted hundreds of interviews with celebrities. Blackmon has an impeccable sense of fashion and is considered a style expert who has worked with household names such as Brooke Shields, Bea Arthur and Judy Tenuta. He even owned an upscale baby boutique called, "Aunt Bobbie's Baby." So how does one go from the world of media and styling Hollywood's elite to writing a best-selling book about weddings?

"The Gay Groom's Guide was never intended to be a book," says Blackmon. During the planning of his wedding with his husband, Martin Connell, he began documenting his experiences. In 2014, he released the first edition and it was an instant success in Canada and America. When asked if there is a difference between wedding planning for straight couples versus gay couples, Blackmon says that all weddings are basically the same ceremonially but are different in the power dynamic of how the event is planned. In straight weddings, it is common for the bride to have most of the control in planning and "the groom just shows up." With two men or two women marrying, there is a different dynamic which often involves a shared planning process. In this current bride-centric wedding culture, the needs of men of all orientations are often lost in the shuffle. The current resources don't really address the needs of men when it comes to what to wear, how to plan and what to expect when planning such an important event. 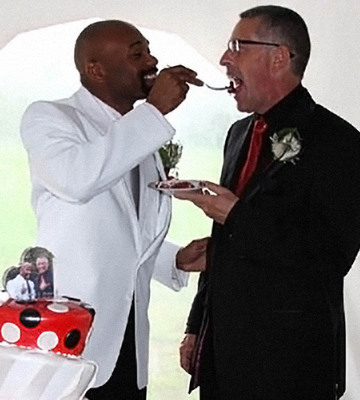 ​Robert and his Husband Martin

The book is not only meant to be read. It also acts as a portable workbook that grooms can use to organize their plans on the go. It's formatted in a clear-cut, bullet-point fashion and features anecdotes from Blackmon's own wedding to show the readers what he and Martin did right and wrong during their planning. The Gay Groom brand has also been extended to Youtube, where Robert has concise videos that address everything from floral and seating arrangements to what to wear, with men in mind. That's the beauty of The Gay Groom's Guide: it is written by a man for other men and addresses the needs specific to that demographic. Even though this book is created with gay grooms in mind, it can be used as a practical guide for anyone who wants to take the headache out of wedding planning, including lesbian and straight couples.

Most people see Robert's impeccable style and Hollywood credentials, but what they don't get to see is Robert the husband, the son, the friend, and the family man. "Family is everything to me," says Blackmon. He sees weddings as a Rites of Passage for couples that want to commemorate their unions through authentic celebrations that fuse tradition, ritual, style and creativity. Robert and Martin were married in Canada, where marriage equality has been the law for over a decade, on the front porch of their home. There was concern that Robert's ailing father would not be able to make the international trip to attend the wedding. Fortunately he was able to attend, although he passed away just six short months later. My father also passed away shortly after my wedding and we both look back at our wedding days as a connection to our late fathers. When you suffer a great loss after such life milestone, the day takes on a greater meaning in retrospect.

Blackmon's foresight has proven him to be a trailblazer in the world of style and wedding planning and it has has paid off in a big way. In what most would consider magically serendipitous timing, the 2nd edition of his book was released just weeks before the historic SCOTUS ruling stating that the Constitution guarantees the right to marry to all people, thereby legalizing all marriages in the US. After the announcement of the ruling, Blackmon's book sales increased by 500 percent. He sold a staggering 12,000 copies over the weekend, grossing over $350,000 dollars, and I wouldn't expect sales to slow down anytime soon.

Robert's book can be found on his website www.GayGroomRobert.com or through Amazon.