The zombie apocalypse is coming. We all know it. Why else would we have a stockpile of Cheese Doodles and extra shotgun shells under our bed if not for securing the perimeter and a delicious snack? Because I'm a book nerd, I also have a teetering stack of novels to keep me occupied until the undead figure out how to use doorknobs and actually enter the house.

As the author of the Zombie Tarot [Quirk Books, $16.95], I wondered how my favorite writers would face the oncoming horde. With conviction and a steadfast gaze, daring the zombies to blink first - which should be a cakewalk since most of them no longer have working eyelids - or would they crumble under the pressure? I decided it's time to find out who has the guts and who left them to be munched on by Hell's Handmaidens through a simple tarot spread. Buckle up, Buttercup, it's go time for the authors of the 19th century.

Using a three-card spread, how asked each would fare using:

Card 1: How they would view the zombie apocalypse: Fearing for their lives or giggling in a corner and annoying people by saying, "I told you so."

Card 2: What they needed to focus on to survive.

Card 3: The ultimate outcome. Would they lead the next wave of survivors to victory or end up chewing on their own feet? 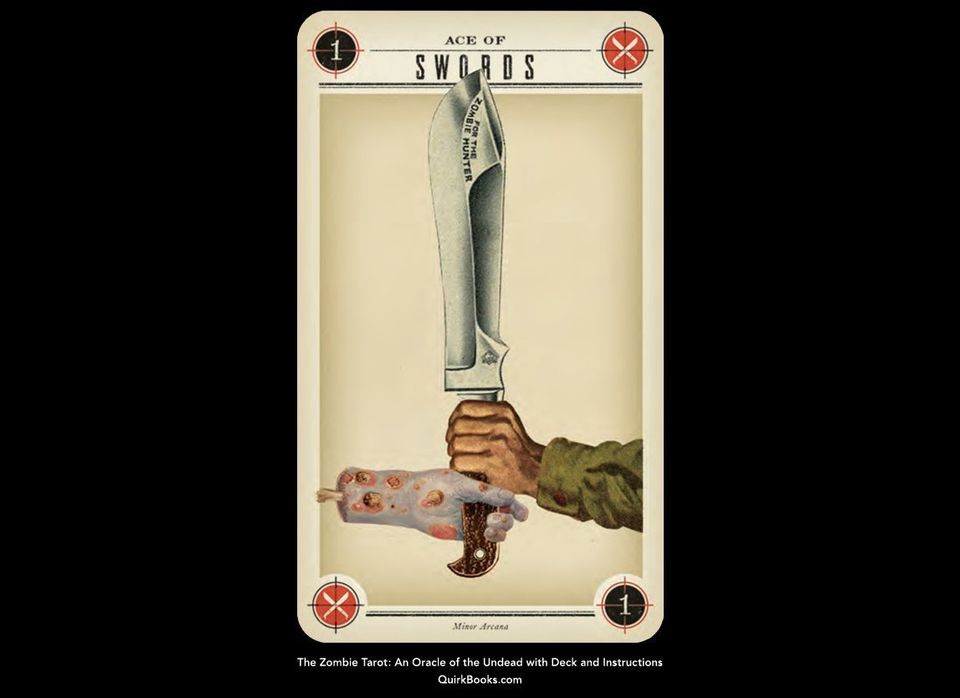 1 / 6
Edgar Allan Poe
Edgar Allan Poe was delectably creepy. His influence on millions of emo kids leaves their parents ready to scrub a few faces and make them get a damn haircut. A natural for the tarot, he probably had a deck or two stashed around the house in case he needed a bit of inspiration. Zombie apocalypse? Bring it. It's hard to tell around the Poe household who was a vicious, death-hungry miscreant - and who just needed a hug. Card 1: Ace of Swords: Who knew Poe was a badass? Okay, everyone. The Ace of Swords is just the excuse he needed to get those juices flowing again for Nevermore II - The Raven's Revenge. Aces are seen as beginnings: a new business venture, a fresh path to travel, even a crazy man with a penchant for making pretty much everyone in the room move away when he heads for the cheese platter would get excited to see this bad boy. I'd be a little scared for the zombies when he gets that gleam in his eye. It's hunting season and Poe's leading the charge. Not to save mankind, he's just ready to play. Card 2: Three of Cups: I called this one a mile away. Who didn't see Poe falling in love with a hot zombie babe? So what if you could feed her cocktail meatballs through her wide-open cheek holes at a party? Who cares if children use her as a festive floating device at the pool? Poe is in love. His focus is now on keeping her safe from the ravages of time and anything having to do with lighter fluid and matches. Score one for their side. Card three: Seven of Swords: Some people never listen. The Seven of Swords represents someone close to him that fondles the firepower a little too enthusiastically. His love will turn on him and lead to his ruin. Then again, did we expect a different fate? And would he have wanted it any other way?