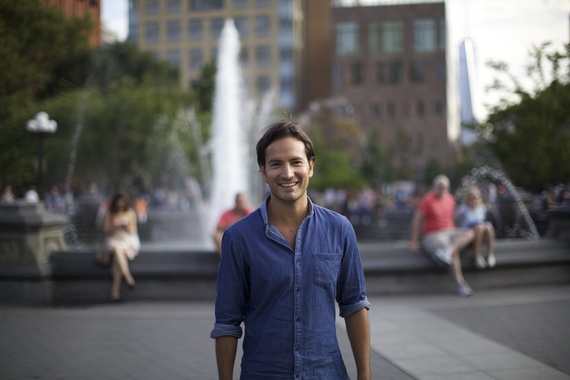 Authorea is a web-native platform for writing technical documents collaboratively. Every document you create becomes a beautiful web-page which you can choose to share with your coauthors and the public.

Universities have given rise to countless startups over the past decade (just look at Stanford, Harvard and MIT's many tech-babies). New York State has recognized this synergy, and Start-Up New York is offering an astounding 10 years tax-free for startups whose initiatives align with a college or university's academic mission. We're not just talking about corporate taxes here. No sales, property, or income taxes for the company and its employees!

Yet, not all of these startups are obedient children. Some of them are beginning to turn their gazes back at academia and challenge the ways in which scholarship is created and its value is measured.

A young startup named Authorea, founded by Alberto Pepe and Nathan Jenkins in 2013, is trying to bring efficiency and transparency to the process of writing scientific papers. At the same time, it hopes to revolutionize incentive structures in academia, and jumpstart scientific exploration in the 21st century.

I interviewed one of Authorea's two co-founders, Alberto Pepe.

Where did you get the idea for Authorea?

I've been in academia and research environments for well over a decade. If you want to move up in the ranks in academia, you have to publish papers. But, the process of writing and publishing is cumbersome and inefficient.

A couple of years ago, I met for a coffee with my friend Nathan Jenkins (now my co-founder at Authorea) and we figured there is probably a better way to collaborate on science, write and disseminate content.

So what were the inefficiencies?

Most people in science write in collaboration. Almost every paper has at least two or three collaborators and sometimes you have hundreds of people on a single paper.

If you're producing a document with other people, it's hard to get simultaneous collaboration done right.

Normally, scientists write one person at a time. You start working on the paper and you tell your colleagues, "Don't touch the paper, I'm working on it this week." Then, something happens, you get behind on work, and by the time you send the paper to your coauthor, he's on vacation. And so on.

Instead of taking two weeks to write a paper, it takes 2-4 months. I've been on collaborations where it takes 6+ months, when, if you had all the data ready, it should only take two weeks.

And you think you can change this with Authorea?

Definitely. But Authorea is about more than just improving efficiency. It's also about making science more transparent, and changing the entire incentive structure of academia and research.

The platform doesn't just bring people together. It keeps track of all the changes happening to the document. Everything is completely transparent, so you can show people how the paper evolved from the very first word to the very last word.

Right now, a scholarly paper just shows a list of authors in an author list, with no idea of who did what. With Authorea, you can keep track of each contribution, and see exactly what each author did.

How is this going to revolutionize research and academia?

Isaac Newton famously said, "I could only see so far because I stood on the shoulder of giants."

This is science. Science is about incremental progress, based on prior work.

In scientific papers, the content that authors generally want to deliver to the public is an image or a graph. If you look at big scientific journals, like Nature, Science, etc., what gets published is an image.

However, that image was created using a heap of data and some algorithm or workflow to analyze that data. Unfortunately, the data "behind" the image is not published, nor is the analysis.

On Authorea, instead of having flat images, we let you share and access the raw materials of science. Click on the image and you get the data. That's true scientific transparency.

If the mission of science is to make research reproducible and transparent then Authorea fulfills that mission. Our idea is to produce data-driven, data-rich articles.

And you think this isn't happening in academia?

Right now, one way to publish and be acknowledged by the scientific community is to publish with a "star" professor. Oftentimes papers just cite the work of famous professors, because they are famous, or their papers are, and so "have" to be cited. But very few scholars are really using or re-using their work.

We believe in the idea of "Forking." Think of an article you are authoring as a road you're walking on. Your readers can take that article, that road, and "fork it." They can build innovative research off that article. They can use your analysis with different data. This will make your work more visible and valuable.

Instead of just citing because they have to.

Right. If there is an open system, your research article becomes a database where you can measure the reputation of a researcher, based on how many times their research has been reused by other people. Articles on Authorea contain provenance information, so you can see what research it was based on.

I believe this is the very basis of how science should function. Research that has been used the most should get the most credit.

Authorea enables a new type of scholarly reward system, not based on citing other people's work, but based on how much that work is reused. This makes science much more egalitarian and democratic.

Yes, metrics that belong to the modern scientific workflow. Science today is web-based. It is modular and atomic. If you need an algorithm, you're going to search the web and find that algorithm instead of looking for the scientific paper that explains it all.

Science today is much more about remixing, searching, and browsing.

How has your experience been launching a startup?

I'm an academic. All I've ever done before starting this company was research. As an undergrad I studied Astrophysics. My Ph.D. was in Information Science at UCLA, and then I did a post-doc at Harvard where I was a fellow at the Berkman Center for Internet and Society.

I had no idea what it meant to build a company: Where to start. What to do.

I remember going to a couple events at the Harvard Innovation Lab and one of my questions was: "How do I actually create a company?"

I don't think a Ph.D. or a research background necessarily gives you the skills you need to create a company. You might have analytical and research skills, but when it comes to legal administration and marketing, we lack the essential notions that anyone who has a business background will have.

I had to learn how to sell. Both myself, and the product we were creating. In research we tend to be very conservative when asked for an estimate about how things are going or will go. In business, you have to be much more optimistic. You also have to learn how to take risks.

What was the hardest part of launching a business?

Starting up Authorea was one of the biggest risks I've ever taken in my life. I left my position at Harvard seven months ago, and we only raised seed funding last month, so I was unemployed for six months.

I had a solid academic career: a postdoc paid by NASA at the greatest academic institution in the world.

When I left, I found myself with no job, no health insurance, and a very good product. I had to spice up my game, sell the product, start talking and using the lingo of a businessman who knows about research.

At the same time I had to set up the legal structure of the company and the terms of the investment. It was very expensive. We ended up spending $30,000, which was 5% of the money we raised, and we had to spend that money out of pocket. Here's some advice: Get a good lawyer who understands startups.

Yeah, what were the biggest lessons you learned?

First off, I learned something about growth.

What differentiates a startup from a pizza joint is that you have to grow in an exponential manner. You start understanding growth when you start growing.

Seeing the entire process, starting with a blank webpage, with a server running in the background, and going from having ten users (who are essentially your friends giving you feedback) to ten thousand, that is very rewarding.

The other thing I learned was to work with friends. Some of the best marketing advice, sales advice and business planning was done not by talking with professionals, but with the help of close friends.

You can pay a consultant a bunch of money, but the best thing to do is stick with your friends and get the specific knowledge that you need. It's been fantastic being surrounded by great people whom I can ask for advice. So my advice to entrepreneurs is: Make great friends.

Why did you decide to run your startup out of New York?

We started the business in Boston, as I was based at Harvard, and there is a great academic community there. Then, I got a visiting scholar position at NYU and relocated to the city.

Over the past couple of years, I spent about three-fourths of my time in New York and the rest in Los Angeles. I thought about relocating the business to Los Angeles, and even moved there to explore the option.

But from the perspective of the people around you who know how a startup runs, from the investors, the developers, the customers--researchers, universities, etc.--New York felt a ton better than Los Angeles. I've never found a place that provides a more fitting environment for startups than New York City.