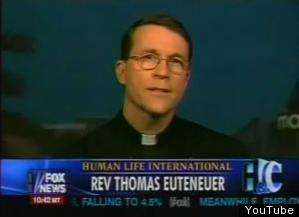 A Feb. 4 statement made by Interim Human Life International President Monsignor Ignacio Barreiro-Carámbula in a Newsletter post acknowledges both "grave harm" to the victim of the admitted "lapses of chastity" by former HLI President Father Thomas Euteneuer, as well as the work of staff at the Front Royal, Virginia-based pro-life headquarters in treating that harm.

The Monsignor's admission three days after the first public statement by Father Euteneuer acknowledging "imprudent decisions with harmful consequences" stemming from the priest's "violating the boundaries of chastity with an adult female" who was under his "spiritual care" -- the conduct of exorcisms in his role as a Catholic priest -- raises questions about potential criminal behavior by Euteneuer.

Exactly what happened between the hard-line, no compromise former face of the pro-life movement and his female victim during the admitted "lapses of chastity" remain unknown to the general public. However, these multiple admissions of "harm," even "grave harm" to a woman under his professional care as a priest raise complicated questions about the boundary between what is on the one hand unacceptable professional conduct versus potential criminal behavior engaged in by Father Euteneuer.

How can local and state authorities now address what has been admitted to, we asked Warren County Commonwealth's Attorney Brian Madden on Feb. 11. We wondered if the religious aspect of treatment for what the church defines as demonic possession, but the secular and legal world is more likely to define as a psychologically-based disorder, creates legal complications for secular authorities.

Madden pointed out that from his legal perspective, whether such a "public confession" of lapses of professional behavioral standards was made by a priest or a medical professional made absolutely no difference. He also explained that even during investigations of criminal complaints, it is sometimes determined that the behavior described, while unpleasant by some social or personal perspectives, may not qualify as criminal in nature.

That said, we asked whether Madden was currently in a position to authorize a preliminary criminal investigation by local law enforcement to determine exactly what kind of behavior the priest has admitted to and whether that behavior, the result of which is being dealt with by HLI staff in his prosecutorial jurisdiction, was potentially criminal. Based on Euteneuer's own statement and other official descriptions of "harm" and "grave harm" to the female subject of that behavior, obvious questions remain about the potentially predatory or even criminal nature of Euteneuer's admitted behavior.

"Most criminal prosecutions are initiated by an alleged victim or witness contacting local law enforcement to report an incident that might be a crime. A law enforcement officer makes an initial determination -- sometimes after consulting with a prosecutor -- whether to proceed with an investigation," Madden began. "Sometimes a law enforcement officer directly witnesses a crime, e.g., drug possession, assault and battery, DUI, etc; sometimes an alleged crime victim goes directly to a magistrate and asks that a perpetrator be charged with a crime."

Madden added that as of Feb. 11, "No one to our knowledge has contacted local law enforcement or a magistrate regarding any of the incidents reported by you."

Contacted the following week, Madden said that situation had not changed.

So as of Feb. 14, perhaps ironically Valentine's Day, the precise status of the "violations of chastity" admitted to by Father Thomas Euteneuer on Feb. 1 remain in a secular, legal limbo.

Among the materials local prosecutor Madden reviewed before replying to the question of a possible criminal investigation of Father Euteneuer were the following statements by involved parties:

• "On many occasions I have stated that our main solidarity should be with those who have been harmed ... In my role as interim president I am committed to do all that I can to be of assistance. But whatever I can do in this regard totally pales in comparison with the selfless dedication of two of our employees who have put many hours assisting the young woman gravely harmed in this case." -- Interim Human Life International President Monsignor Ignacio Barreiro-Carámbula, from a Feb. 4 HLI e-Column;

• "I must acknowledge, however, that one particularly complex situation clouded my judgment and led me to imprudent decisions with harmful consequences, the worst of which was violating the boundaries of chastity with an adult female who was under my spiritual care. I take full responsibility for my own poor judgment, my weakness and my sinful conduct that resulted from it ... I state without reserve that I am deeply sorry for my actions. I have personally apologized, where possible, to anyone I have harmed." --Father Thomas Euteneuer, from a Feb. 1 statement on LifeSiteNews website;

• "Father Euteneuer has been undergoing intensive evaluation and counseling to address admitted inappropriate crossing of adult heterosexual boundaries on the occasion of carrying out his priestly ministry ... Father Euteneuer has cooperated in the process while at the same time expressing contrition for his conduct and the harm it has caused." --Bishop Gerald Barbarito of the Diocese of Palm Beach, from a Feb. 1 post on LifeSiteNews website. Barbarito recalled Father Euteneuer from his HLI post in August 2010 after the priest's initial confession to inappropriate behavior.

A version of this story appears in Warren County Report.