April is Autism Awareness Month. My inbox is filled with "Light it up blue" (#LIUB) emails. Blue light bulbs, shirts, and ribbons are supposed to remind all of us that autism is still a puzzle to figure out, and research is still needed.

I guess it's a good idea to have a special month for autism since one out of every 68 kids in America is now diagnosed as having Autistic Spectrum Disorder (ASD). With odds like those, I suspect everyone knows someone whose life has been touched by ASD. I am the proud grandparent of twins who could fall under the ASD umbrella, but that does not really tell you who they are. As is often stated in the autism world, "If you meet one person with autism, you've met one person with autism."

When I used to think about autism, I pictured Dustin Hoffman in the 1988 movie Rain Man. The film won academy awards for Best Movie, Best Actor, Best Screenplay and Best Director, but what I remember most from it was the famous toothpick scene. Hoffman knocks a box of toothpicks on the floor and says, "82, 82, 82...246 total." When his brother tells him he's close because there were 250 in the box, the waitress holding the box notes that there are four left in it.

At first, it made no sense that my grandchildren, who are so affectionate and connected with me, fit Hoffman's portrayal of autism. True, their language is impaired. One uses communication software on her iPad and the other struggles to answer routine questions. But they do have empathy and strong emotional connections. Perhaps too strong.

There is a theory of autism developed by two neuroscientists, Kamila and Henry Markram, called the Intense World Syndrome. They ask us to,

Imagine being born into a world of bewildering, inescapable sensory overload, like a visitor from a much darker, calmer, quieter planet. Your mother's eyes: a strobe light. Your father's voice: a growling jackhammer. That cute little onesie everyone thinks is so soft? Sandpaper with diamond grit. And what about all that cooing and affection? A barrage of chaotic, indecipherable input, a cacophony of raw, unfilterable data.

Just to survive, you'd need to be excellent at detecting any pattern you could find in the frightful and oppressive noise. To stay sane, you'd have to control as much as possible, developing a rigid focus on detail, routine and repetition...The behavior that results is not due to cognitive deficits--the prevailing view in autism research circles today--but the opposite... Rather than being oblivious, autistic people take in too much and learn too fast.

While people on the autistic spectrum may appear to lack emotion and empathy, the Markrams believe they are actually overwhelmed not only by their own emotions, but by the emotions of others.

Autism encompasses a broad spectrum of behaviors. And we are just in the early stages of understanding it. During World Autism Awareness Month 2016, we are still putting out the fires, addressing the symptoms as best we can without understanding the underlying causes.

I don't need to wear blue to make myself think about my grandchildren and the many others like them struggling to make sense of the world. But I want to remind you that they are so much more than a label or statistic. They are beloved big sisters, daughters, and grandchildren. And they are much more capable than they appear to be.

These are
a few of their favorite things
:

One of the girls has become a prolific photographer. Her photos support the Markram view that what she experiences in her world is more, not less. She sees patterns and details that neurotypical folks like me don't even notice: 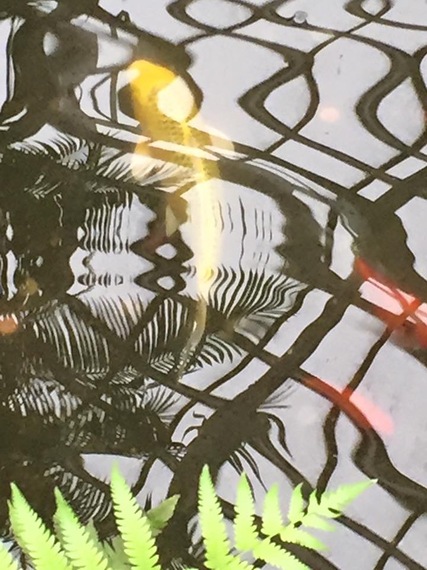 Gold fish and reflections in a pond

Her pictures speak volumes about how my granddaughter sees the world. I am in awe of her vision and her ability to notice and capture this beauty. She lights up my world twelve months a year.