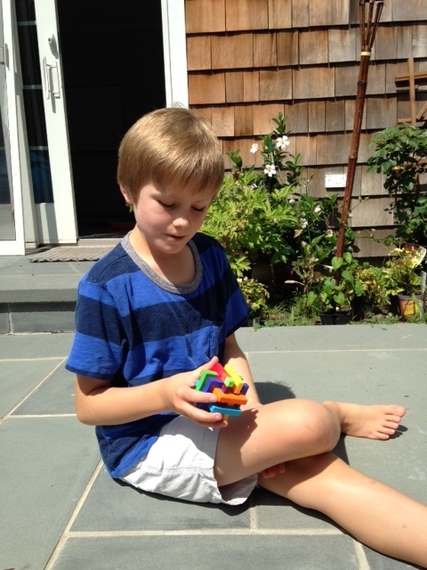 The other night, my children were getting ready to go to bed. My oldest son Jack, who has autism, likes to bring a few items to bed with him. On this particular evening he was perseverating on the different colored pieces of a plastic marble run. He was dropping each piece on the counter and moving in closely to listen to them fall. He dropped a red one, then a green one, then a blue one, all the while listening intensely to the sounds they made.

I went over to Jack and picked up some plastic pieces of my own and began dropping them on the counter, listening to them one by one and wondering what it was that enthralled him.

I suddenly understood. "What note is this?" and I dropped a green piece.

He didn't like the green piece I dropped and picked up a different green one and said, "this is a D."

He was dropping each piece and listening for the musical note it represented. When he was satisfied with his selection of colored plastic pieces he ran up the stairs to his bedroom.

I felt a little twinge of awe as I followed him up the stairs. Sure he was different, but how many other people did I know who could hear music in plastic pieces from a marble run? 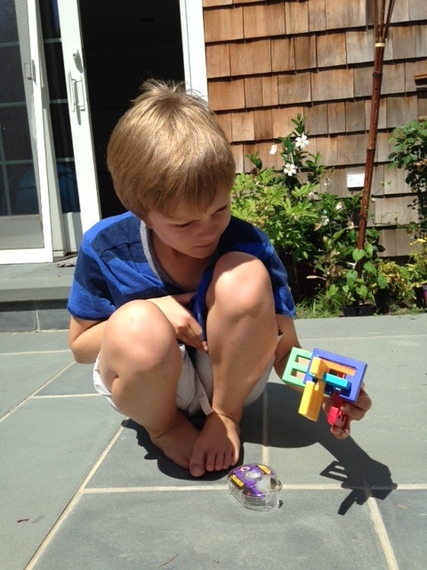 If you asked any one of us parents of children with autism what we dream of for our children, we will give you the same answer. We want our children to have friends, be invited to parties, enjoy successful careers filled with meaning, and find life partners with whom to share life's ups and downs.

We do not focus our dreams on practical skills, like their math ability or their reading aptitude. We pray for a connection.

But we are largely initiated into the world of autism from a fear-based mentality. Several years ago, I would have approached him playing with those pieces with a sense of unease and discomfort. What he was doing was clearly "autistic" and according to the experts this behavior needed to be stopped. Perhaps he would get stuck there, destined to become more and more autistic if I did not intervene.

And then, what would happen? He would exhibit more and more aberrant behaviors. He would have to live in a home, never contributing anything of value to the world around him. He would be alone.

These were the thoughts I had then. That was back in the days when I was afraid.

But today, I am not afraid.

We often make the mistake of believing that a child with autism exhibits aberrant behaviors for no reason. But Jack had a purpose for his pre-bedtime antics, as do many children with autism when they behave in unconventional ways. They may retreat from a situation to compensate for an overload of sensory stimulation, or they may walk on their toes to manage their sense of space. In Jack's case, he perseverated on the perfect musical notes, that may be aberrant but it is also beautiful.

Their behaviors have meaning, so when we force conformity onto them, we are also crushing any chance we have for sharing that meaning--for having a meaningful relationship with them. By approaching Jack with an inquisitive spirit rather than a fearful one, I was able to understand him and even admire him. I actually created an interaction with my son that opens the door to a reciprocal relationship.

We start off afraid that they will never fit in.

But the #1 thing that you can do for your child is to drop that particular fear.

It is one of the great paradoxes I have seen firsthand. All of the things we want for our child have a real chance of manifesting when we accept their behaviors rather than fear them. It's like the wall of tension we created gets toppled, and we actually create a bridge for our child to connect with us. And when that bridge is built, they are not only reachable, but they reach out to us.

It's not hard to understand why. Who would you rather connect with? A person who rides your back and watches your every move so they can correct all of your mistakes, or a person who fully accepts you and celebrates every tiny attempt you make? Which person would you reach out to?

It's a no-brainer. I have watched this approach work miracles on my own son.

Jack and I were sitting at the kitchen counter one morning and we were flipping through a book on making polyhedrons out of origami. He loves these geometrical shapes and we were becoming expert at making them together.

He looked up at me and said, "What's mommy's favorite color?"

He wanted to know my favorite color? He had never asked me that before.

"No really, what is mommy's favorite color?"

And now he didn't believe me? That discernment of me wasn't something he ever did, either.

"I want to make mommy a yellow dodecahedron."

Ask anyone who knows anything about autism, and they will agree that this was a significant comment. Acceptance of our child leads to our child's empathy with others, and this moment demonstrated that. It was a genuine, spontaneous interaction. On one level, he was giving me origami.

But really, what he was giving me was love.