Nancy Garden, author of the landmark young adult book, Annie on My Mind, died on June 23rd at the age of 76. Nancy was family.

Nancy's surviving, lifelong partner, Sandy Scott, is my mother's cousin. And during the summers of my youth, "Sandy and Nancy" were a short sprint through the woods.

My only ancestor to ever make above-average money was my maternal great-grandfather. And in the 1930s he built four cabins in the woods of Northwestern Rhode Island; one for himself and his wife, and one each for his three children and their families.

They weren't glamorous retreats: There was no central heating or air, but there was plumbing--however weak--and all properties were a short walk from one another through woodlands that were both beautiful when thin and sparse--as they were in the 1930s--or as vastly overgrown as they are today. By design, family visits were not only possible, but subtlety encouraged.

By the 1970s, some elders had passed; and many descendants had emigrated from Rhode Island, just grown up, or stayed away due to bad blood. And later, as that great-grandfather's legacy (if not his high hopes for family unity) got whittled down, many ancestors would also discover that they lacked the funds to keep up a seasonal getaway. The very Protestant "chestnuts on an open fire"-dream, had faded.

I was an urban kid from Providence, back when the city was a mob-run, economically-devastated dump; the child of a young, single mother, and an (Irish-Catholic) father killed in Vietnam. And due to the intense polarization of the time, I was destined to suffer the opinions of his war that my father wasn't around to absorb himself. The complications of my undiagnosed Asperger's, Catholic vs. Protestant animosity--meant less compared with that war. Those on the political left felt comfortable telling me my father was a murderer (including a 5th grade teacher), and those on the political right inferred that I was a disgrace to my father because I didn't feel like saluting the flag. And while it turned out to be a good long-term strategy, I made everything worse in the short-term by figuratively hitting back at both sides. So naturally, my chill time in those woods became a lot more important than most can imagine.

Sandy and Nancy always had dogs, and I discovered through them that I too loved dogs; succeeding only at 10 years old at lobbying my patient mother for one of my own. These loving beasts were the initial draw as I ran, an unescorted toddler, the quarter-mile to Sandy and Nancy's place. But as I grew older, the attraction became about them, not their dogs. Their house was warm; and so unannounced, I frequently appeared on their doorstep.

In later years, I would become astonished by how they'd never complained about my surprise visits, as they had always convinced me they were happy to see me. And once, in the late-1990s when I was having one of the two heart to heart talks with them (that we would ever have) about our family, I shared that remembrance. Nancy laughed as she related that she and Sandy had once been having a major fight when I showed up. It hadn't showed then, though what was now evident was their ability to keep things happy for a child.

Our family wasn't littered with miserable marriages, but Sandy and Nancy were the happiest couple I knew. To me, they were not two individuals who had found each other, they were a true unit. If you pressed me back then to answer which of the two was the blood relative, I would struggle. And sometimes, I would even get it wrong which one was Sandy and which one was Nancy.

As a child I was told that Sandy and Nancy were great friends, and maybe this was the best that could be mustered. But by the time puberty hit me, I was more than cognizant of attitudes towards them, as well as the meaning of the word "lesbian" that no one wanted to use. My grandparents' generation bestowed love and professional admiration for Sandy and Nancy, but a "tolerance" existed, one filtered through still-Victorian attitudes about their relationship; irreparable, tragic prejudices that prevented true acceptance, yet because it wasn't outright ostracization, was subliminally expected to be received with gratitude. They seemed to appreciate that Sandy and Nancy avoided romantic public affection, and I know not if this was due to (internal) prejudicial discomfort, or due to how it might reflect on them (in the external). Nor do I know whether Sandy and Nancy avoided "PA" to win family favor, or just because it was a much safer and easier strategy back then. But somewhere in my ignorance, I knew then that if I lived in Sandy and Nancy's shoes, it wouldn't be enough. I never even saw them lock lips for real until their wedding in 2004.

But either through Sandy and Nancy's test of time, my mother's influence, or through the openly gay friends I had in high school, my beloved grandparents (who partially raised me) eventually turned a page. When we love, we seek to change, not punish.

I don't recall knowing that Nancy was a writer, or that Sandy was a lawyer, until I was that teenager. And I was ignorant of the unreal social progress that Nancy's Annie on My Mind was making when I was a junior and senior in high school--as the first LGBT love story written for teens that had the gall not to end in a suicide. But Sandy and Nancy weren't the bragging types, and I was too absorbed in my own potential and therefore missed the shattered earth her book had caused. When I went to graduate school for playwriting, Nancy and I had our first conversations between an established writer, and a budding one. She clearly was uncomfortable with the celebrated avant-garde nature of my then-aesthetics, and I in turn rebuffed her concerns as that of the "kitchen-sink old guard." So Nancy was never a mentor or a career source, and years would go by without contact between the three of us, especially after they decided to make a purchase in Maine their new summer home.

I was equally ignorant in 1993, when after some preacher had made a spectacle of burning Nancy's book, the school board of Olathe, Kansas had ordered all copies of "Annie on My Mind" off library shelves. A group of students, teachers, and a librarian sued in Federal court to put the book back, and the forces of light eventually won a landmark, free-speech ruling. After that, I would often hear of Sandy and Nancy's increased activism.

But reunions were as warm as ever. Sandy and Nancy understood the mistakes families make when they think that opinions (about sexuality, aesthetics, careers . . .) matter; when they don't. Love and support--for who we all really are, as well as what we choose to do--are all that counts.

Too self-absorbed, I didn't read "Annie..." until the mid to late-1990s, and I of course had to ask Nancy about how much hers and Sandy's history had influenced the book. The short answer is "Duh..." Of course it had. They too had met as teenagers.

So the world should know that there's no "Annie" without "Sandy and Nancy."

Recently in California, a cousin married her partner of over a decade. At what was unquestionably a victorious, overdue wedding reception, this couple celebrated amongst what I would categorize as a wonderful, diverse, support system. But at the happy reception I inexplicably couldn't help thinking glum thoughts: that with all the romanticism surrounding these civil rights victories, where we celebrate the "scratching and clawing" our way to acceptance . . . that we sometimes overlook the often lifelong wounds caused by all the scratching and clawing--pain, that doesn't fully disappear just because we won. I know some of this from the autism/Asperger fights I've been a part of. But my diagnosis wouldn't get me a death sentence in certain economically-depressed countries; and let's face it, people are over-grateful when we marry ("thank God someone wants to be with him!"). Lastly, Rachel Robinson once said of her husband, Jackie; that the three years of "no retaliation" that Branch Rickey made him promise? . . . had been a factor in why Jackie Robinson died so young.

Sandy and Nancy endured a myriad of hurt from both the outside world, and the familial inside. What they got from their elders, however loving or proportionately-strong, was rarely unconditional. But their love for each other won out over whatever anger they lived with. The were together until Nancy's end; one of those boring couples who despite all the obstacles (and for all I know) never needed to stray, break up, divorce, or especially, fight around children.

Of course I admired Nancy, as I do Sandy; but this is distant. It's gratitude that resonates with a family member; love for them that started with their love--the mountain-moving real thing that so few of us are lucky to find, that doesn't judge based on the junk in our pants, and that teaches us how any attitude not founded in love might be more than just a little stupid.

Yet, having made such a proclamation, I also don't think that we supposed non-bigots are always the better people we think we are. Usually we avoid these snakepits due to exposure, preferably at a young age, with those who might look different, think different...etc.. Throw messages of love into the mix and our conversions are quite swift. We are primarily lucky, not good.

Only one cabin remains in those woods; what is now my mother's and her husband's. Sandy and Nancy's went to pot after they stopped using it, was eventually torn down, and their plot is now full of ill-spaced, natural growth.

There's usually two-dozen or so childhood memories seared into our heads. And in one of mine, I'm probably 8 years old. I am running to their house, eyes closed as a challenge to how well my feet know the winding path. I reach their cabin without having fallen in the creek or smashed into a tree, and I open my eyes. The bright sun strobelights my horizontal world, having weaved its way through the overgrowth of tall, shady trees. With gobs of saliva their two golden retrievers greet me first. Either Sandy or Nancy is a few feet out the door with her arms outstretched, waiting to hug me. The other has a broad smile as she too comes out the door. But in the memory I don't know which is which. They are two, made into one . . . indeterminable.

To a child, this is heaven. 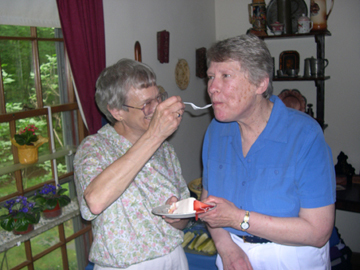 Michael John Carley is the Founder of GRASP, and the author of "Asperger's From the Inside-Out" (Penguin/Perigee), "The Last Memoir of Asperger Syndrome" (TBD), and numerous articles. In 2000, he and one of his two sons were diagnosed with Asperger's Syndrome. More information can be found at www.michaeljohncarley.com