In case anyone's missed it, there's a social revolution happening in the world of pro sports.

In a natural extension of society, doing away with "the middle man" (such as publishing companies, agents, etc.), a website called The Player's Tribune (PT) has recently emerged that allows professional athletes to sidestep traditional sports media, and tell their own stories directly to the public. The brainchild of the recently-retired Yankee great, Derek Jeter, PT has been making waves as it changes what we hear and how we receive the information. Thanks to an article by Blue Jays slugger Jose Bautista, sports fans discovered the immense hardships endured by young Dominican baseball players. Thanks to an article by the all-time great Hayley Wickenheiser, hockey lovers were given insight into her real thoughts on the death of her friend, NHL veteran Steve Montador (whose autopsy revealed yet another case of the concussion-related brain injury, CTE [Chronic Traumatic Encephalopathy]). It's a new era, one where players are coming out about depression, anxiety and even Borderline Personality Disorder. So can an athlete on the autism spectrum be that far behind?

I spoke with Artie Kempner about the possibilities. Kempner, a FOX Sports NFL director and FOX's coordinating director of NASCAR, is also the father of a child with autism (one with a unique talent for remembering most Disney-movie scripts). He cautions that a first-person account can be just as inaccurate, or agenda-laden, as a traditional "story," but in essence, he strongly feels that PT is a welcome addition to how information is relayed to the public.

Overall, I like the balance... Sometimes the media don't get it right, and this is a chance for (athletes) to say, "this is how it happened in my view."

As to the subject of an athlete on the spectrum, we looked at two questions:

1. A Professional Athlete With Autism?

The short answer is... absolutely.

For starters, most of us know that the diagnosis now encompasses great brains, with folks like Einstein, Edison, Dickinson, Beethoven, etc. -- not to mention half of Silicon Valley's billionaires -- speculated to be on the spectrum. But sports have also begun creeping into the list of accomplishments that are possible with autism. In a column I wrote a year ago detailing my experiences as a person with Asperger's playing semi-pro baseball, I cited the many examples of school and amateur accomplishments of athletes on the spectrum. While still not probable, given the motor skills challenges, emotional regulation needed, and the peer relations required of team sports, the odds for athletic achievement in spectrumfolk are rising as society continues to become more behaviorally pluralistic. Kempner agrees.

I think it's happening. There's gotta be an athlete, a competitor, at the highest level, that is performing and has high-functioning autism or Asperger's Syndrome, and is able to control what they show to the world.

As an example, he cited the core responsibilities of offensive lineman in the NFL, saying the position lends itself to spectrum attributes:

It's repetitive behavior. Everything is so detail oriented playing offensive line. You constantly have to do the same thing, the same steps. They have to be so precise.

Kempner also talked about the golfer Moe Norman (1925-2004). Norman, dubbed "The Rainman of Golf" by GolfWeek magazine, would often go into the final round of a tournament with the lead and then reportedly lose at the end on purpose, only so that he wouldn't have to speak to the press.

And I'll be blunt: Though unethical for me to say who I'm thinking of, my Aspie radar goes off bells and whistles when looking at a few select pro players and coaches. They themselves may not wish to disclose, they may or may not have even been diagnosed, or even have suspicions (and the courage to have them) that something's different. But they're out there. 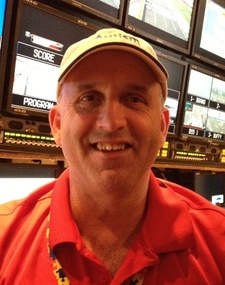 2. An Athlete With Autism in the Locker Room? No Way!

Actually? Way. Kempner is emphatic on this:

People have dealt with guys on sports teams that have mental illness, and that have just been "out there" at times, and I think that's more difficult to deal with than someone who is on the autism spectrum. We've known about people that were bipolar, or manic-depressive, or even [had schizophrenia], and that have played professional sports in some shape or form ... If somebody can perform at a high level, and is a good teammate overall? If you're good enough, people will accommodate.

But a third question looms. Why disclose -- in a PT article or anywhere?

We disclose, as people on the spectrum, because we want something -- whether it's extra time to take a test, or because we want validation from others -- as it's been harder for us to attain that which we've attained. But if you're a decently-paid pro athlete under the influence of ideas like, "If it ain't broke, don't fix it," what could said pro athlete get in return from such an admission of sensitive information? The last two years have seen an unreal jump in humanity with LGBTQ athletes gaining infinitely more acceptance in sports' historically homophobic culture. But the autism spectrum's road to progress has been different. While our history has been filled with horrific stuff (especially for those who are significantly challenged), the autism community does not currently endure the systematic and venomous bigotry that the LGBTQ community still faces, and that the autism world has not faced since the days of Bruno Bettelheim, when parents were often told, "Put him in a home and forget you ever had him." Such a disclosure might even backfire under the revolting, but oft heard, "They're just looking for an excuse." What's to be gained?

"I don't see where the impact matters unless the impact is a negative on the team."

People like me will obviously wish the first "spectrum pro athlete disclosure" to revolve around either A) setting an example to young spectrumites that broadens their ideas of what is possible for them; or B) as a rebuttal to those who wish to paint the condition of autism as only a tragedy. But maybe Kempner is right, and there needs to be something a little "broken," either in the locker room or with the public, for the autism disclosure to become necessary.

No matter what the reason may be, I suspect that given athletes' growing distrust with established sports media (just ask David Ortiz. Or pay the slightest notice to how NFL writers and fans seem to care infinitely more about deflated footballs than they do that many of the league's veterans seem to be developing CTE), the Player's Tribune will be the forum through which that history is made. How odd, that a likely first-ballot, Hall of Famer such as Jeter might have a secondary life that, on the scale of social progress, is the far greater career.

And (again), no matter what the reason may be, my hope is that we all embrace that individual, when he or she surface, and that we in the autism community especially, express our pride in him or her. Thanks to the Player's Tribune, we're getting a much deeper understanding of how hard it is to become (and perhaps be) a professional athlete. Add autism to the mix? The least we can do is offer our admiration.

A Final Shout-Out of thanks, to the Organization for Autism Research (OAR) for honoring me as one of three dads profiled in their Father's Day Tribute.

Michael John Carley is the Founder of GRASP, a School Consultant, and the author of "Asperger's From the Inside-Out" (Penguin/Perigee), "The Last Memoir of Asperger Syndrome" (TBD), and numerous articles. He is also at work on "Unemployed on the Autism Spectrum," and "'Why Am I Afraid of Sex?' Building Sexual Confidence in the Autism Spectrum...and Beyond!" (both, Jessica Kingsley Publishers, due 2016). In 2000, he and one of his two sons were diagnosed with Asperger's Syndrome. More information can be found at www.michaeljohncarley.com