Recently one of my publishers sent me a book, Following Ezra: What One Father Learned About Gumby, Otters, Autism, and Love from His Extraordinary Son. Having just emerged from many months of researching and writing book number five on autism, I was not predisposed to read anything associated with the A-word. However, being partial to interesting book covers, I couldn't resist the urge to peruse this memoir. Once I opened it, I couldn't put it down. Following Ezra, by author Tom Fields-Meyer, is not just a book about raising a child with autism; it's a very well-written book about the trails and tribulations of being a parent, period. 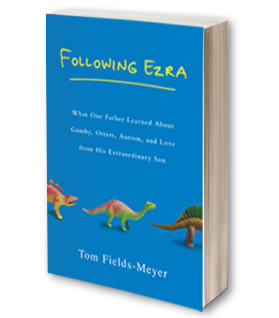 One reason this book is such a good read is that covering human interest stories is what Fields-Meyer does for a living. He is a former senior writer for People and has written for The New York Times and The Wall Street Journal. He is a master storyteller, and this time he recounts his own personal story and that of his son, Ezra, from age 3, when he was diagnosed, to his bar mitzvah at age 12.

Another reason is the approach that Fields-Meyer decided to take in raising his son with autism, who didn't like to play with children when he was little, obsessively lined up plastic dinosaurs, and avoided eye-contact. In the prologue of Following Ezra, Fields-Meyer describes his quest of searching for the right doctors, diets, medicines and therapies. But what he discovers is that he has been focusing on the wrong thing: "It wasn't about finding the right expert for my child; it was about learning to be the right parent," he writes.

For Fields-Meyer, learning to be the right parent meant developing a relationship with his son by following Ezra's lead to learn more about his interests, motivations and way of thinking. Fields-Meyer discovers that Ezra has an incredible memory and an enthusiasm for life, and he decides to focus on these qualities to help him learn and grow. Ezra loves animals and going to the zoo; he loves Disney movies. At some point Ezra becomes obsessed with the calendar and celebrates important dates, such as the first time he set eyes on a Cardigan Welsh corgi, or the first of the month, by waking up at dawn and running around the house yelling "It's the first day of May!" Fields-Meyer decides to celebrate with him. (On another note, having a child with a great memory for dates is certainly an added plus when you are writing a memoir.)

There is a scene in the book that helps explain Field-Meyer's approach to parenting. Before Ezra was officially diagnosed, his parents took him to weekly visits to see a therapist, who tried to help Ezra by drawing him out. One day, when his wife tearfully expressed the frustrations of trying to play with him and just the situation in general, the therapist told them, "You have to allow yourself to grieve for the child he didn't turn out to be."

As Fields-Meyer explains, many parents in this situation are in mourning for the child they expected and hoped to have, and they have to go through a mourning process so that they can move on, as the therapist rightly pointed out. Only, he didn't feel that way, because he hadn't had any expectations about the child he was hoping to have. Over the years he'd seen acquaintances who wanted their children to go into the family business or become lawyers, or who didn't want them to be gay. These parents were disappointed in their children when they didn't turn out the way they expected. Fields-Meyer never wanted to be that kind of parent.

Most parents of children with regressive-type autism (children who developed normally and then lost the skills they had gained) would understandably have a different outlook. In those cases, parents mourn for the child they did have, the child that was interacting with them, that they saw change before their eyes. That's a different situation. I have met many parents of children like mine, who showed signs of having significant developmental challenges from early on, and many of them mourn the child they wish they'd had, while accepting the child they do have. Personally, I relate to the author's point of view. Raising Jeremy, who still requires 24/7 care at age 22, is exhausting and not without struggle. But whenever I read the news of the day, I am grateful that my son will never be maimed in war, become a serial killer or turn out to be a stockbroker on Wall Street who bilks trusting clients out of millions of dollars.

It's clear that it is not always easy for Ezra to be Ezra, or for Fields-Meyer to be the parent of Ezra, and Fields-Meyer does not gloss over the challenges and weariness. He may not mourn for the child he did not get, but he certainly does not consider having Ezra as being a special blessing or a miracle. Parents will recognize the painful situations that many of us share: the haircuts where Ezra feels so tortured he grabs the scissors and throws them at the hairdresser; the times that Ezra runs out of the house clad only in his underwear; or clothes shopping expedition when Ezra licks his image in the mirror and then puts the shirt on -- backwards.

Raising a child who has obsessive thoughts and who verbalizes them constantly can be truly exhausting. Fields-Meyer describes how, a few weeks before Ezra's bar mitzvah, he helped Ezra put aside his obsessive thoughts about the Complete Star Wars Encyclopedia and gift cards he hopes to receive. Fields-Meyer takes him for a walk and listens to Ezra explain the mental jam he is in. Fields-Meyer instructs him to take all his thoughts about the coveted presents, put them all in a black lump in his head, pull the black lump out of his head through his ear, and leave the lump under a tree. He instructs him that if he has more obsessive thoughts before the bar mitzvah, he should send them there. This seems to work.

There are humorous yet embarrassing situations in this book that parents will relate to, such as the time Ezra asked the obese neighbor how he got so fat, or the day Fields-Meyer learned that Ezra could read. When Fields-Meyer asked why he set off the fire alarm, Ezra replied, "It said 'pull down.'"

In a Fields-Meyer blog post on his website, he describes a family custom that explains his attitude toward raising Ezra:

We have a custom in our family. When somebody breaks a glass, we celebrate. As soon as you hear the shards shattering on the kitchen floor, the rule is that you say: "I hated that glass! Thanks for getting rid of it for me!" Because what else can you do? Get angry? Make the person pay the price? It's not going to bring the glass back. So we make the best of what we have, and we always try to make life a celebration. And then we clean up the glass.

Ezra is now 15, and Field-Meyer has helped him find a way to channel his interests and obsessions through the use of technology to give him an outlet to express himself, and perhaps to have a future career. Next month, Ezra will be the published co-author of a children's book E-MERGENCY with New York Times bestseller Tom Lichtenheld, based on an animation Ezra made when he was 12. I'm looking forward to reading it. The book cover is pretty cool.