Winter weather wreaked havoc across Europe this week. In the latest incident, heavy snow led to a massive autobahn pileup that involved 100 cars on Germany's A45 motorway.

According to The Huffington Post's translation of local reports, at least 20 people were injured -- six of them seriously -- in the series of collisions that shut down the highway in both directions for hundreds of miles. Rescue workers rushed to free people from the wreckage Tuesday and were forced to cut some motorists out of their vehicles.

Germany's DAPD news agency described the pileup as a scene of "ruins." Despite the widespread damage, no deaths have been reported.

Germany's Frankfurt airport was also closed for several hours Tuesday because of the snowfall, and more than 200 flights were canceled.

Travel delays and massive collisions weren't just limited to Germany, as snow blanketed other parts of central Europe, as well. In Belgium, slick roads and blustery conditions led to traffic jams that spanned 1,600 kilometers (about 994 miles) -- a record for the country. 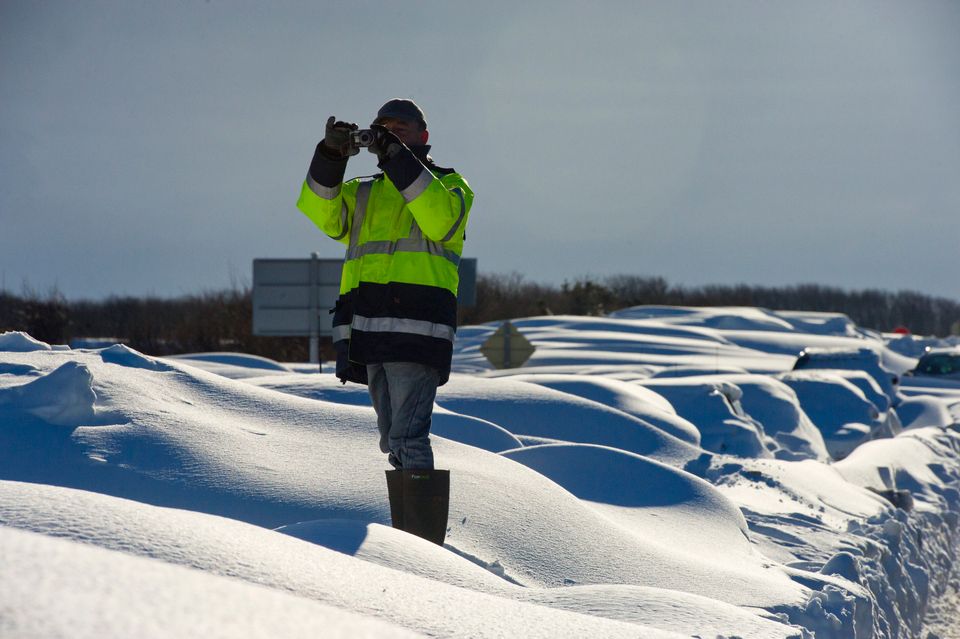 1 / 8
A man takes photos on March 13, 2013 perched on cars covered in snow on the D901 around Beaumont-Hague, northern France, following a heavy snow storm. Blizzard-like conditions -- coming only eight days before the official start of spring -- knocked out power to thousands of people in France and left motorists stranded in their cars. (ALAIN JOCARD/AFP/Getty Images)
Getty Images