Following last week's shooting massacre in Aurora, Colorado, many were outraged at how easy it was for the suspect, James Holmes, to legally obtain guns and ammunition, including an AR-15 assault weapon. The image below went viral online, implying it was easier to purchase an automatic weapon in the U.S. than it was to purchase French cheese: 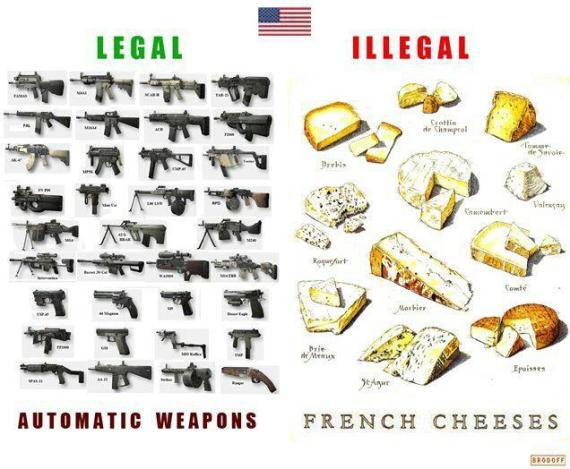 The photo isn't perfect. The image of the guns on the left appears to have originated as a list of weapons available in the video game "Call of Duty: Modern Warfare 2," and has appeared on websites associated with the game. Several of the guns depicted are also not automatic.

That being said, gun laws are a patchwork of federal and state regulations. A federal assault weapons ban expired in 2004, but other, more restrictive laws are in effect in some states. While some of the weapons shown in the picture aren't legal in any state, it remains legal under the National Firearms Act to purchase an automatic weapon in some states if one has approval from the Bureau of Alcohol, Tobacco, Firearms and Explosives. These weapons are tightly regulated and are rarely the sort of modern assault rifles picture in the image above. Furthermore, most commercially available versions of the weapons above are required to be semi-automatic, meaning one bullet is fired for each pull of the trigger.

So, the cheeses in the graphic are not banned per se. They're only banned if they're made with raw milk that hasn't been aged a minimum of 60 days. And if they're made with pasteurized milk, they're fine. Thus, newer French Brie cheese made with pasteurized milk can be sold in the US (even though it's reportedly less tasty than the "real" French version - and part of the lost flavor of some French cheeses comes from the fact that their peak flavor comes at a time "less" than 60 days).

Aravosis also notes that around 2005, the FDA began enforcing the cheese rules, "possibly for legit reasons, possibly as retaliation for a trade dispute."

This article has been updated with additional information about the source for the photo above, and state and federal gun laws.