DORTMUND, Germany, Oct 11 (Reuters) - Germany's neo-Nazis are hanging up their bomber jackets, unlacing their black leather boots and even grabbing a bite to eat at their local Turkish kebab shop.

Eschewing their predecessors' fierce aversion to anything "un-German", they blend into the local community and easily escape detection. But police and experts say this new generation of young fascists is potentially far more dangerous and reckless than their older peers.

"Today a neo-Nazi can eat Turkish kebabs and still go out and beat up immigrants," said journalist Johannes Radke, who has reported on the German far-right for more than a decade.

"They say, 'We'll let everyone do whatever they want as long as they're a Nazi at heart.'"

Headquartered in the down-at-heel western industrial city of Dortmund, a new group known as the Autonomous Nationalists (AN) is at the forefront of this transformation.

They share the hard-core xenophobia of older cadres in the far-right, but their appearance and tactics are those of a dynamic, Internet-savvy youth movement.

They wear stylish running shoes and expensive brand name windbreakers and communicate with each other via Twitter. The use of English slogans at protests, for decades taboo in far-right circles, is widespread.

"They see themselves as the avant-garde of the Nazi scene," Radke said. "They're much more professional than some drunk, dim-witted skinhead - and more dangerous."

Authorities and residents across Germany have become more sensitive to the threat of far-right militants since revelations last year that a neo-Nazi cell waged a seven-year racist killing spree throughout the country, murdering nine people, mostly ethnic Turks, one of them in Dortmund.

The cell's existence only came to light by chance after two members committed suicide following a botched bank robbery. The murders forced an overhaul of Germany's intelligence services.

Nearly seven decades after the fall of Adolf Hitler's Nazi regime, far-right groups remain marginalised in Germany, with most of their support tending to come from the impoverished former communist east.

But the so-called 'Zwickau cell' shows that the danger is not confined to any one area of the country. Left unchecked, experts say, neo-Nazis could again stage deadly attacks.

This year, keen to show they take the threat seriously, federal authorities have been weighing a possible ban on the only far-right party to hold seats in any German legislature.

The National Democratic Party (NPD), which sits in two state assemblies, is racist and anti-Semitic, intelligence services say. The party is careful not to break German laws forbidding Nazi symbols, denial of the Holocaust and public expressions of support for Hitler.

The Autonomous Nationalists have no such qualms. They have no appetite for political manoeuvering and readily unfurl banners quoting Hitler at their protest rallies.

"Many Nazis moved here because they thought this was a broken city," Dortmund mayor Ullrich Sierau told Reuters, adding that extremists exploited the fact the city of half a million has one of the highest unemployment rates in the region.

Dortmund's new police chief Norbert Wesseler said there were 131 crimes tied to far-right militants including violent assaults in the city in the first half of the year.

"The number of offences has risen considerably over earlier years," he added, without giving comparative figures.

A former neo-Nazi from eastern Germany, who has since left the scene and spoke to Reuters on condition of anonymity for fear of reprisals, said new recruits discover the Autonomous Nationalists are a restless bunch, always plotting their next move.

"When you're in that scene, it's like you're living in a parallel universe to normal society," said the 25-year-old, who never joined the AN but often stayed at its flats.

The neo-Nazis methodically prepare their attacks against anyone who opposes their radical views, he said.

Much of the work they do mirrors that of private investigators: researching targets, staking out locations and taking pictures of opponents to match faces to names.

Many do not work, living off welfare from a democratic state they vehemently oppose as well as donations from sympathetic outsiders.

"They are also able to secure weapons through contacts in other countries, such as Bulgaria or Switzerland," he said. "If you need something, it's possible for them to get it across the border."

Alerted to the threat, Dortmund is among the cities that is taking measures.

Police raided AN clubhouses and apartments in Dortmund and two other cities in August, seizing weapons and propaganda material.

The authorities also outlawed the AN's local branch there although no arrests were made.

"We've all gotten better at recognising the relationship between criminal offences and far-right extremist ideologies and realising that there is an organisation behind the scenes that is calling the shots," Wesseler said.

Wesseler said he had also increased police patrols in the area where the group rents its apartments.

There are signs the campaign may be working.

On Sept. 1, a date neo-Nazis mark to commemorate Nazi Germany's invasion of Poland in 1939, the only visible banners were those urging fascists to leave town.

Lamp posts were newly painted with a special anti-adhesive to deter far-right vandals from defacing them.

A message has been displayed on top of Dortmund's landmark U-Tower - a 1920s-era skyscraper crowned with an illuminated letter "U" and giant TV screens.

"I, the tower, have always thought Nazis were uncool," it read.

Hajo Funke, a professor of political science and far-right expert at Berlin's Free University, cautioned against complacency, however.

"If the ban isn't enforced properly then nothing will happen," Funke said. "Then they'll be just as dangerous as before." (Editing by Gareth Jones and Sonya Hepinstall) 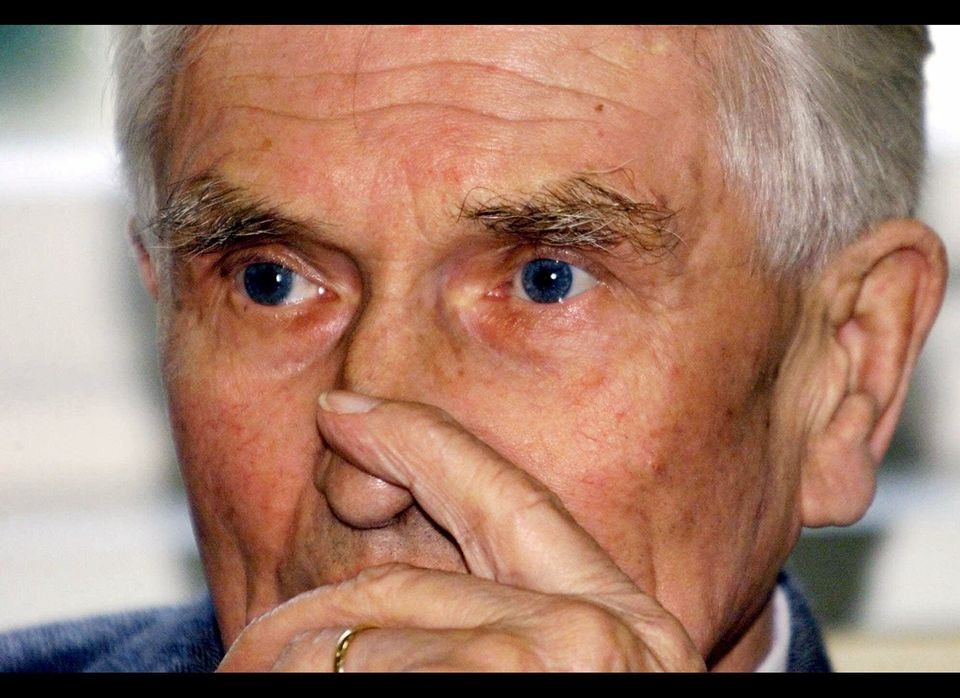 1 / 10
May 2001
Anton Malloth, an 89-year-old former guard at the Theresienstadt fortress in occupied Czechoslovakia, is sentenced to life in prison for beating and kicking a Jewish inmate to death in 1944. (Photo: AP)
AP