The term "invasive species" calls to mind images of aggressive animals that tear up landscapes and destroy everything in their path -- wild boar or Asian carp are well-known culprits -- but would you ever think to include berries on that list? You're mistaken if you think animals are alone on the invasive species list, because as proven by something as seemingly sweet and innocuous as the "autumn berry," vegetation can be equally threatening to our environment. 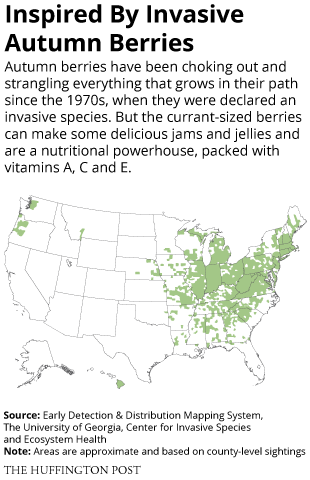 Autumn berries, also known as the autumn olive, are the small red fruit of the autumn olive tree (Elaeagnus umbellata), which was imported from Asia to North America as an ornamental tree in the 1830s. Though the berries themselves are small (approximately the size of a red currant), the trees on which they grow are a giant problem. Since the 1970s, when they were declared an invasive species in the U.S., they've been choking out and strangling everything that grows in their path, taking up space that oftentimes needs to be cleared for highways, pastures, and other lots of valuable land. They've spread their nitrogen-fixing roots all across America as an invasive species, with the exception of a few states (Connecticut, Massachusetts, New Hampshire, and West Virginia) that only classify them as noxious weeds.

One documented case of the autumn berry's devastation is the story of Tony Smith, a Virginia farmer whose land has been destroyed by the plant. He describes autumn berry trees as "like Mad Max on some kind of good crank.” The unrelenting spread of the plant over his cattle-grazing pastures has the potential to wipe out his entire livelihood within a decade. On a piece of land where 20 cows could once graze, now a single cow can't walk without being entangled in autumn berry trees. 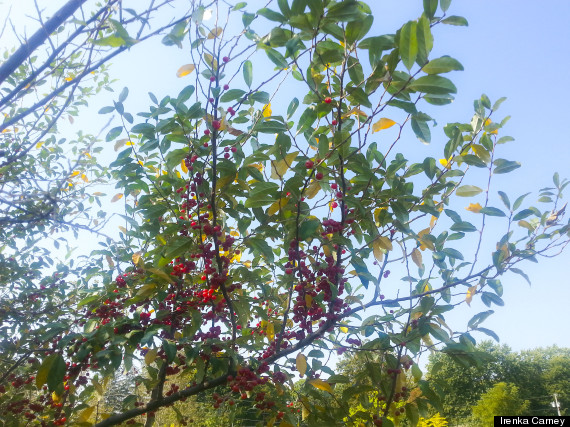 Perhaps the biggest expert on autumn berries is Dustin Kelly, the founder, CEO and owner of Autumn Berry Inspired. On his site, Kelly tells the story of farmers like Smith, but also emphasizes the importance of understanding both the pros and cons of invasive species -- he says we should heed their dangers, but also make the most of what they have to offer.

In the case of autumn berries, their biggest assets are their myriad health benefits and culinary uses.

These tiny red jewels are a nutritional powerhouse, packed with vitamins A, C, and E, flavonoids and essential fatty acids. But they're even better known for being rich in the antioxidant lycopene, which is a major player in fighting many cancers. In fact, autumn berries are 17 times richer in lycopene than an equal serving of tomatoes. And that's not the only similarity between autumn berries and tomatoes …

Oddly enough, the aroma of pure autumn berry puree is dead-on reminiscent of V8 juice. Despite being labeled as a berry, and despite claims that they taste like cranberries or pomegranates, we found autumn berries to taste more savory than a typical sweet, tart berry. Kelly says this might be due to the fact that autumn berries aren't in fact a berry at all: "Autumn berries are actually a 'drupe' like apricots, almonds, and cherries, coconuts and olives. The classification is quite interesting actually," he says.

If you compare the taxonomy of an autumn olive with an olive, they're related by class, but the similarities end there. "Really, they are mostly called 'autumn olive' because the silver leaves on a short squat tree resemble Mediterranean olive trees," Kelly told The Huffington Post. "We call them berries because in terms of the culinary world, they are used much more like berries than olives." It's also been said that USDA researchers suggested changing the name autumn olive to autumn berry as a more attractive name, to help its chances of becoming a cash crop.

Not sure how to eat them? First of all, be careful when foraging for autumn berries in the wild. Kelly says they can be easily confused with poisonous berries. "Of course, nobody should eat a wild food that they are not certain about, and small red berries is definitely a category people should be careful with," Kelly says. "The important thing is to recognize the leaves with silver undersides in an alternating pattern and matte (not shiny) berries with speckles, and not confuse them with the invasive tartarian honeysuckle, which has all green leaves in pairs and shiny berries without speckles."

Once you've acquired some autumn berries, they can be eaten fresh, pureed, frozen, made into jam, fermented into wine … just about any way you can imagine. We found a simple way to enjoy autumn berries that'd be great for the holidays, in the form of an Autumn Berry Sparkling Cocktail.

- 2 Tb autumn berry puree (purchase it at Autumn Berry Inspired, where you can also find jam and frozen autumn berries)- 1 glass of sparkling wine, like Champagne or prosecco

Spoon puree into the bottom of a glass, and top with chilled sparkling wine. Cheers!