That's the word Eldad Hagar uses when talking about rescuing Ava, a homeless dog living on the streets of Los Angeles.

Hagar, co-founder of the LA-based animal rescue Hope for Paws, said he rushed over to rescue Ava last month after being tipped off by a good Samaritan. It's believed the pooch had been living on the streets for several weeks before Hagar got to her.

With the help of Victoria Van Violence -- a model from Germany who had flown to the U.S. specifically to learn more about Hagar's work -- Hagar managed to earn Ava's trust and whisked her off to a veterinary hospital.

In the video above, Ava transforms from a skittish and scared pup, to a warm, cuddly bundle of love after a bit of coaxing and affection.

"It took just 10 seconds from the moment I initiated physical contact with her, until she was just loving being touched," Hagar told The Huffington Post via email. "To me, this is like magic -- the speed that she accepted my love…is just amazing." 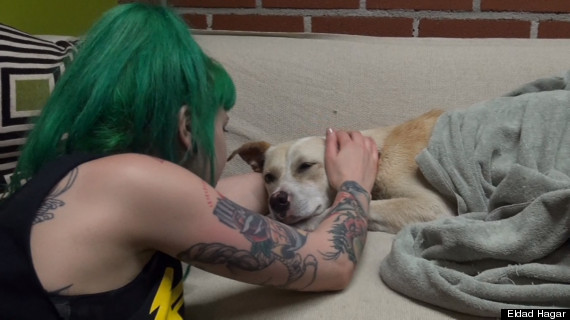 "I [taught her] the reasoning behind every decision I made that day," Hagar told the HuffPost, adding that he hopes the video will prove educational for people interested in the process behind his dog rescues. (Hagar warns, however, not to attempt his method on stray dogs as it "could result in a serious injury.")

Ava, who is estimated to be about 1 year old, is currently living with a foster family.

For more information on how to adopt Ava or others like her, visit the websites of Death Row Dogs Rescue and Hope for Paws.