A 31-year old Swedish director has taken a swipe at a segment of Sweden's older generation in his first feature film, Avalon. 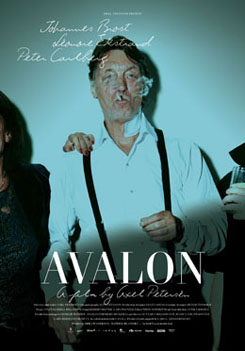 The film premiered last week at the 2011 Toronto Int'l Film Festival. Its three main characters are all over 60, and they behave very, very badly. The story unfolds over one week in the coastal summer resort town of Bastad. The three have just a week to open a swank nightclub, Avalon, in time for the two-week tennis season.

Bastad is where Bjorn Borg has slammed his way to many victories, whipping up frenzied, boozed-up crowds. It's also where this film's director, Axel Petersén, (below) grew up. He describes it:

Bastad is a seaside town that swells to about 15,000 in the summer. People come here to party, to go crazy. You either go crazy or you go home. I know these people. I worked in the bars, and my family and relatives still live there. My inspiration for the film was right in front of me, these decadent, pleasure-seeking characters. They've never grown up since the wild partying of the 80s. 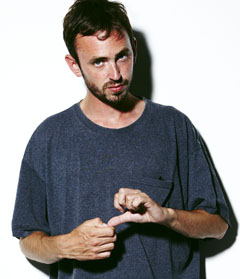 My aunt, Léonore Ekstrand, is one of them. I asked if she'd play the female lead, Jackie, and she said 'yes' although she'd never acted. I also knew I wanted the Swedish actor Johannes Brost in the lead, playing Janne, because Brost's reputation on and off screen is exactly what I was writing about.

The story begins when Janne, a charming nightclub promoter who's been in jail for some infraction, arrives with his blasé older sister, Jackie, to help his friend Klas (Peter Carlberg) open Avalon. Although the two men are partners, the un-cool Klas is financing the whole thing as Janne is broke.

With heaps of work still to do, a roof and furniture to build, a kitchen to install, Janne and Jackie are not particularly concerned. They hang out at the beach, play backgammon and bridge, take drives in the countryside (which is beautiful and no small part of the film), leaving preparations mainly to Klas and his hired help. Janne will be the front man for the club. For him, the party has begun.

The fun comes to a halt when Janne accidentally backs his car into a scaffolding, killing a young male worker. Only Jackie sees the accident as she was in the car. They leave the body and go tell Klas their secret. None of the three considers calling the police. The accident would stain their club opening.

Instead, Klas promises a large wad of money to two upscale young golfers who dispose of the body. When the young man's girlfriend comes looking for him, they give away nothing. She waits for days, then leaves defiantly, suspecting them of wrongdoing as the lad's cell phone remained in his quarters. I asked Petersén if this isn't unusual behavior:

No, this is typical of this selfish older crowd. They avoid responsibility; they exercise control over everything they touch. As in this situation, they have no respect for the law or for youth. In Sweden there's a feeling among younger people that these older people don't care about us and are blocking us.

I'm getting really curious now. "From what?" I ask.

"From making changes in this country. Changes we want to happen."

"What age is your president?" I ask.

"Oh, he's not even 50, so that's normal. But there are others in culture, industry and business who have been running things here in Sweden. They won't get out of the way and let younger viewpoints get through."

Despite his personal views of this age group, Petersén likes his aunt, who is never without a drink in her hand. "She played herself and hugely influenced the film," he says. "She's also an expert bridge player." 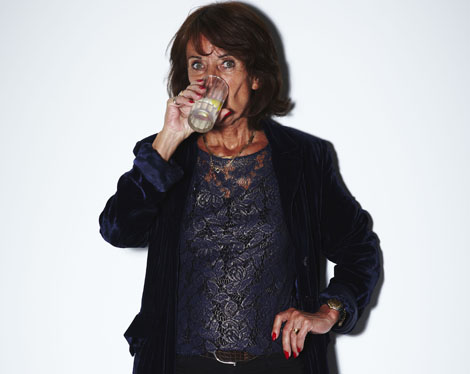 While making the film, Petersén says he learned to admire Brost (below left), not just as an actor.

Although he has heavy bags under his eyes and a permanently down-turned mouth, he is boy-ish and still has sex appeal. To have a 65-year-old whose mindset is younger than mine is extremely fascinating. 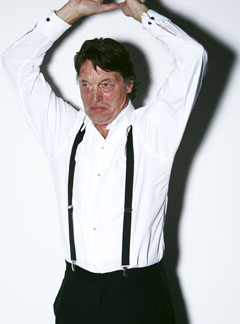 Another clue to the director's personal relationship to this film is its ending. During Avalon's raucous opening night, money flows like vodka. After drinking, smoking and snorting through the crowd, Janne commits a second surprise crime. Then he and his accomplices, Jackie and Klas, romantically flee into the sunrise, ever the escapists. In the final wordless scene, Sweden's drab and chilling national anthem plays in the background. To Swedes, who will recognize this music, it makes this final scene ironic and iconic at the same time.