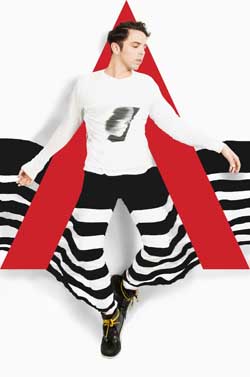 It wasn't until joining AVAN LAVA two years ago that I really started opening up publicly about my sexuality. It's not something that I've been known to broadcast. I mean, I've come out to my parents three times and they still ask about ex-girlfriends. It's hilarious. And while homosexuality has become so much more acceptable and even embraced in the entertainment industry, I still feel hesitant to say, "I'm a gay artist," not because of the prejudice, but because I don't think my identity as a performer needs a qualified description. I am an artist. The most appealing part about AVAN LAVA is that we have no overt political or social agenda. Many people expect that minority (gay) artists are trying to make it on behalf of all minorities everywhere, or in spite of being oppressed, but that's not our mission. My biggest influence is Freddie Mercury. He was a ferocious, sexy, strong, vocal genius. Although he was a gay artist, he wasn't classified as one. That's inspiring.

Our show and our music are truly intended to be an inclusive experience. This shit is for everyone, and we're happy to see it become contagious! We spend a lot of energy enhancing our live show. I think we've created a stadium-ready production -- synchronized LED lights, fog, lasers, choreography, surprises -- so now all we need is the stadium status! People always walk away saying, "I danced my ass off!" That's really our goal: dance, get drunk, let yourself go, make out with a stranger, and wake up sore... from the dancing...

At a recent show, I went to kiss a friend of mine after finishing our last song of the set, "It's Never Over" (listen below), and realized in that moment that everyone wanted to kiss everyone. So we did. I came across this guy who was extremely attractive and asked him over the mic if he'd like to kiss me. He shouted, "Yes!" so I leaned in for the kill. It seemed like he was into it. Later I learned that he was straight! I usually don't remember most of the things I do in the shows, but I'll always remember that kiss. For a split second, this guy who considers himself straight let himself have a totally consequence-free experience. Our show afforded him that opportunity. When we're in the building, there's no judgment.

With the live show, we strive to create a safe space for everyone to drop whatever identity they claim and just go hard. All the members of the band come with an understanding of spectacle and showmanship. For our next set of live shows, the choreography is strongly rooted in the NYC Vogue Ball culture. Some of us members recently got together to rewatch Paris Is Burning, and now we can't stop vogueing. Truly. Can't. Stop. We love the concept of aggressive fantasy, donning a costume, assuming an identity that you don't necessarily own, and celebrating that. And just as in the Balls, at an AVAN LAVA show, the audience becomes an indispensable player -- it simply doesn't work without them.

With the upcoming release of Flex Fantasy, our music has taken a sexier turn. We're already back in the studio recording new tracks, going even further with our natural pop and dance instincts. Ironically, staying true to ourselves artistically will most likely see us making more commercially appealing pop tunes. Give me "We Found Love" by Rihanna and Calvin Harris any day. That stuff is infectious! Let's dance!!

Listen to AVAN LAVA's "It's Never Over":

AVAN LAVA is playing Feb. 11 at Glasslands in Brooklyn at 9 p.m. Their Flex Fantasy EP release show will take place Feb. 25 at Mercury Lounge in New York City at 10:30 p.m.