While the history of art movements includes many that were either short-lived or limited to few active participants -- "Vorticism," the largely forgotten Cubist-based modernism movement that resurfaced at Tate Britain in 2011 is one that comes to mind -- from time to time, one will come to public attention that turns out not to be a "movement" at all. Whether hoax or concept-based practice gone awry, here are eight art movements that never were. 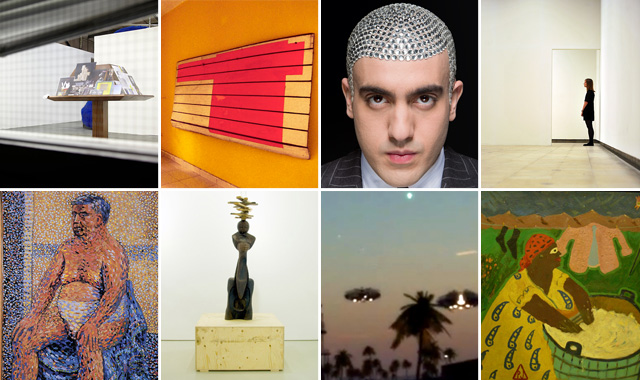 To see images of works from art movements that weren't, click on the slideshow.

In 1924, journalist Paul Jordan-Smith was annoyed to read the negative reviews his artist wife's still lifes had received for being "too realistic," and, despite having never painted previously, he decided to attack modern art in response. One night, he later wrote, "given the oldest tubes of red and green paint and a worn brush I took up a defective canvas and in a few minutes splashed out the crude outlines of an asymmetrical savage holding up what was intended to be a star fish, but turned out a banana. I labeled it 'Yes We Have No Bananas.'" Using the name "Pavel Jerdanowitch," and posing as a Russian, he sent it in to New York's Exhibition of the Independents at the Waldorf-Astoria. The hoax worked; critics raved about the painting and compared it to a Gauguin. When writers contacted him for biographical information, he made up a long, involved backstory, and stated his work as "disumbrationist" (meaning "anti-shadows," which Jordan-Smith didn't know how to paint). From there, with invitations to other exhibitions, he went on to make and show similar canvases along a "7 Deadly Sins" theme, with leaflets offering short, comical descriptions. For his painting "Illuminations," he wrote, "It is midnight and the drunken man stumbles home, anticipating a storm from his indignant wife; he sees her eyes and the lightning of her wrath." These continued to receive positive reviews in the Chicago Evening Post, La Revue Moderne, and others, and one image was even featured in "The Golden Book of Modern Art." Finally, tiring of the hoax, Jordan-Smith outed himself in a newspaper editorial in 1927, much to his collectors' dismay.

"As I toil away interpretating the works in our collection here, I sometimes find it necessary to create labels for specific pieces," says Michael Frank, curator-in-chief of the Museum of Bad Art in Dedham Square, Massachussetts, which accepts submissions (either of found anonymous works, or works sent by artists' friends and artists themselves) for their playful exhibitions. Noticing a common trend of bizarre subjects rendered in a certain pointillist style led Frank to propose a movement titled "pointlessism," which he defines as, "the technique of painting small dots and lines of contrasting colors in combination so that, seen from a distance, they blend together to form an image of questionable value." Notable works in the collection of what Frank titles "labor-intensive pointlessism" include "Sunday on the Pot With George" and "Bone Juggling Dog Wearing a Hula Skirt." The movement hasn't been embraced by practicing artists, but the MOBA collection continues to grow.

When British entrepreneur and "tastemaker" Philip Levine began to go bald in 2006, he decided to take advantage of his newly freed-up head space to use it as a canvas for art. He worked with professional body painter Kat Sinclair to create numerous designs for his scalp, which he termed "baldazzling." Over the next few years, this expanded from head-paintings of landscapes to object-based designs including thumbtacks, butterflies, and 1,000 Swarovski crystals, as well as appropriation-based art such as Banksy imitations. As the project expanded he decided to turn it into the multi-disciplinary field of "headism," and incorporated other creative professionals to create photographs, videos, and sculptures of the works. The first professional exhibition of Headism was held at NL Gallery in London, May 2011 (and sponsored by Gillette); Levine has since also himself been exhibited as a life-art sculpture in institutes like Victoria & Albert and Somerset House. But given that Headism has not since been adopted elsewhere in the artworld, it seems likely to remain more of a one-man project than an actual movement.

UK journalist Tim Williams and a friend came up with the hoax idea of "metadadaism" as what he later termed an "affectionate satire on contemporary art," specifically as a riff on the Young British Artists and the influence of commerce. As the two later defined it on a blogspot built for the fake movement, Metadadaism "refutes the Nietzschian view of the artist as the vanguard of society while, conversely, retaining the notions of status and authority that such a position affords;" i.e., maintaining the prestige of art stardom without producing works of any actual innovation. The blogspot stated that Metadadism had attained widespread recognition after a (fictitious) controversial 2004 show at Haunch of Venison titled "Nothing," in which artists such as Tracey Emin, Damien Hirst, David Hockney, Sarah Lucas and others were commissioned, essentially, to not put up any artwork. Despite the fact that any Internet search of the show or the movement failed to turn up any other results than the blog, Williams managed to slip the entry onto Wikipedia for several months, and he and his friend were amused to find their entry begin to turn up in online art encyclopedias across the Web. Later, he wondered whether it might have inspired artist Simon Pope's show "Gallery Space Recall" later that year, which was, in fact, a show consisting of an empty gallery.

Of the many "truth is out there" UFO video hoaxes that have created viral stirs over the past ten years, the one that went most viral was a "UFO Over Haiti" video that received 3 million views the day that it was posted on YouTube. When it hit the press, L.A. Times reporter David Sarno did some investigation to track down the source -- Barzolff814 -- and learned that the video's fame had surprised its 35-year-old French creator, a professional animator who made the videos as research for a feature-length film he was working on (the plot: two friends who create a UFO hoax that spins out of control) with production company Partizan (of "Eternal Sunshine of the Spotless Mind" fame). Since then, though there hasn't been any news on the film's release, Barzolff814 has gone on to develop it into an art movement "Realitism," that, according to his website, is an "artistic and philosophical movement at the root of this questioning of reality," within which is the sub-movement "Hoax Art," for which Barzolff814 is actively seeking out artists and other creative individuals interested in "a movement that uses hoaxes as a new media to reach the public and embedy [sic] the public in the art work." The only videos on the site so far consist of Barzolff814's various UFO films -- though only time will tell where his project leads to next.

Visitors to Konstantin and Yuri Shamanov's show "Good News" at Orel Gallery in 2009 had likely not heard of the Russian artists nor of Chameleon Art, a "radical new art movement" challenging the "mores of a 'diseased present.'" While sculptures and other works on display appeared plausibly inspired by earlier Constructivism, it was later revealed that the artists (and movement) were invented as an art world prank by brothers Jake and Dinos Chapman. While the Chapman brothers never officially explained the hoax, critics thought that it might have been commentary on the rising influence of corrupt Russian oligarchs on the art market; in an interview, one Chapman (posing as a Shamanov) referenced serving in the military with Roman Abramovic, stating that "he drank petrol" and "when he smoked, he set his hair on fire."

The tagging of Mark Rothko's "Black on Maroon" with the words "a potential act of yellowism" at Tate Modern last October 7 by Vladimir Umanets may have been one of the most infamous art-related vandalism acts of recent memory; in part because of the estimated cost of the damage, in part because of Umanets' two-year jail sentence, and in part because it riled the art world into trying to figure out what exactly Vladimir Umanets and partner Marcin Lodyga's movement "yellowism" was all about. Its main themes seemed to just be about, well, making things yellow. As its manifesto declares, "examples of Yellowism can look like works of art, but are not works of art ... pieces of Yellowism are only about yellow and nothing more. All manifestations of Yellowism have the same sense and meaning and express exactly the same. In Yellowism, all the possible interpretations are reduced to one -- are equalized, flattened to yellow." Purportedly the movement began with a November 2010 show in Egypt, "Flattened to Yellow;" various exhibitions since then (all of which were necessarily held in yellow-painted chambers) generally featured paintings of yellow things painted in yellow, or images of artists doing things in yellow places like McDonalds. Since Umanets' arrest, Yellowism does not seem to have drawn to a halt -- in fact, as the Facebook page announces, Lodyga will be speaking on Yellowism at the "Learning Without Frontiers" world summit at the Barbican this summer. But given that both artists are likely on the surveillance list of every major museum, chances are that their masterpiece-tagging days are over.

A movement that, had it existed, might have been a fascinating one, Blue Conceptualism was a fictional artists' group invented by UK artist Ryan Gander for his 2011 show "Locked Room Scenario." Staged in a London warehouse, the show centered around an exhibition space visitors were not able to enter, which purportedly contained the final show of the Blue Conceptualists; objects, writings, and conversations among performance artists wandering through the surrounding rooms referenced the fictional history of the movement's 1970s rise to prominence, offering glimpses of artifacts and other works (blue neon sculptures, a dancer in a blue dress, blue rope partitions) tied to the motif, and the melancholic feeling of a period drawing to its end. As for what it all meant -- or would have meant -- according to a mysterious blog posted online at the time of the show, the movement combined the art of ideas with the art of emotion within Picasso's "Blue Period."

To see images of works from art movements that weren't, click on the slideshow.