A die-hard "Iron Man" and "Avengers" fan who grew up on "Batman: The Animated Series," Tumblr blogger Robin of Robinade decided to combine her love of style and superheroes by creating "Avengers" fashion sketches. But she wasn't just designing "Thor"-inspired dresses -- she was making a statement about women in the comic book industry.

"I am a huge fan of superheroes in both movie and comic book form, but I am not the target demographic," Robin said in an email to the Huffington Post. "Most of the merchandise for these characters are for men -- and at 5' 2" I'm never going to be able to fit into a man's hoodie. Comic books and action movies are generally made by men, for men; that fact that women like them too is apparently incidental."

Creating superhero-inspired "Avengers" dresses is Robin's way of celebrating both femininity and comic books, and saying, "Hey, girls like this stuff too!"

Check out her designs in the slideshow below, and tweet your favorites @HuffPostTeen!

Do you know an awesome teen-run Tumblr or Pinterest page the world should be obsessed with? Email it to us at teen@huffingtonpost.com! 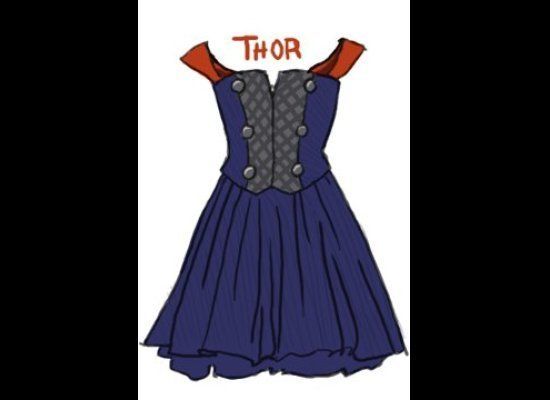