Average is officially over. From this point forward it will be tough to be an employee who receives good wages with just average skills.

Last night, I overheard a waiter sharing with guests at the next table that he really wanted to be an architect but he wasn't very good with math. "My brother got all the math brains," he said. So he dropped out of school until he could find a degree or a job that didn't require a lot of math.

I hear that same rationale a lot these days:
"I'm not very good with computers."
"I don't like all this change."
"I need to work face-to-face."
"I'm too old to learn that."
"I've already tried and it didn't work."
"The economy is terrible here."
"I would have to move and start over."
"I doesn't pay me to work."
And the list goes on...and on. (Here's 101 excuses for not getting a job.)

That's indicative of what's wrong with many workers today. When something is hard to learn or uncomfortable, they hope some employer will dumb the job down to their level of competence. That's a problem - not only for a young adult like the 20 year old waiter but for every worker from 16 to 70. Rationalizing why they are unprepared and often unskilled (even when educated) is often the best skill they have. 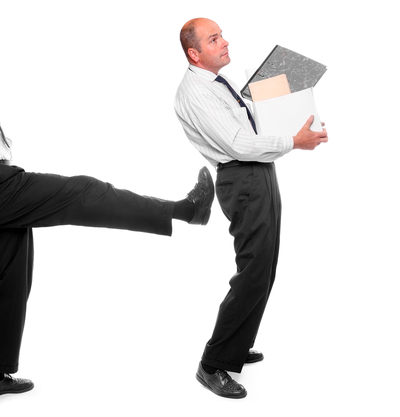 Whether you fall into the unemployed, hard-to-employ, or full time employed worker category, I've got bad news. The world is not going to stop turning or even slow down to accommodate you. It will keep turning, likely faster and faster, and the more you stand still or resist the change or make the commitment to upgrade your skills, the further behind you might fall.

From this day forward, someone or something will be pushing every worker to do a better job or be replaced. Unlike the last 50 years, this time the replacement might not be another worker who lives down the street but a robot or some other piece of technology. The competition for good paying jobs has gotten a lot stiffer. And if it's not technology competing with the worker for the job it might be another employee half-way around the world with the same skills who can do it cheaper and faster. To get a job and remain employed in a good paying job, the world of work demands workers possess more skills, become more collaborative, and engage adaptability.

We're now in an era in which globalization and the information technology revolution have merged. The "high-wage, middle-skilled" job that created our massive middle class for the past half-century has all but disappeared. Many average Americans learned to live a relatively comfortable middle-class lifestyle with average skills. In today's globalized hyper-connected fast-changing world, the only high-wage jobs are high-skill jobs. And even many of those jobs are in jeopardy.

As I said, it's tough and going to be tougher to be an employee. At least that is the future promoted by Tom Friedman and Marina Gorbis.

The digital divide is disappearing. Sooner than later every person on earth will have the opportunity to be the proud owner of a smartphone which puts each person a few clicks away from access to success.

Please note - I didn't say clicks away from success. I said access to success. Easy success promises are the property of junk emails, get-rich-fast websites, and late night TV. The only thing that a degree, motivation, and hard work provides you is an opportunity, not a guaranteed outcome.

The major divide between success and poverty or unemployment and work will be motivation. More specifically, acquiring a job or career will require self-motivation as opposed to someone kicking you in the butt and presenting opportunity on a silver platter.

If a tribesman from Africa or a remote villager from South America can educate himself and launch a business, certainly people living in the US - whether they live in a cardboard box or suburbia - can learn new skills and step outside their comfort zone.

To be in the middle class today, workers will need to be constantly improving their skills over their lifetime. To do that, they will need a lot more self-motivation.

"Self motivation is critical in the hyperconnected world," says Freidman. "To stay relevant, [everyone] has got to find [his] "extra," [his] unique perpetual value-add."