MINNEAPOLIS (RNS) Mohamed Ahmed, a gas station manager who moonlights as an anti-terror propagandist, is ready to launch another strike against Islamic State terrorists.

He’s just waiting for his tax refund to do it.

Frustrated by a slick social media campaign on the Internet by the Islamic State that authorities say has helped lure dozens of young Muslim Americans to the fight in Iraq and Syria, Ahmed has poured thousands of dollars of his own money over the last six months into producing a series of animated cartoon messages to rebut the extremist group’s messaging.

The cartoons, which Ahmed posts on his averagemohamed.com website and YouTube, star a character named Average Mohamed, a plain-spoken Muslim who speaks out against his religion’s being misinterpreted by terrorists.

The bearded and gap-toothed Average Mohamed argues that the Islamic State, also known as ISIS or ISIL, is “about genocide” and quotes the Quran in making the case that Muslims who see suspicious activities should alert authorities.

Ahmed said his target audience is kids ages 8 to 16. He has latched onto the idea that it will take a bunch of Average Mohameds to beat ISIS, which on Tuesday (Feb. 3) posted grisly footage on the Internet of militants burning alive a Jordanian pilot who had been held captive by the group.

“It takes an idea to destroy an idea,” said Ahmed, who plans to produce a cartoon to address the attack on France’s satirical weekly Charlie Hebdo as soon as he can scrounge up enough money. “The value of peace is worth it. We’ll take all risks to defend democratic values.”

Ahmed, 39, a father of four young children, is just one of many Muslim parents and leaders in the U.S. who are struggling to find the answers to cure what they see as a plague of Islamic radicalization. 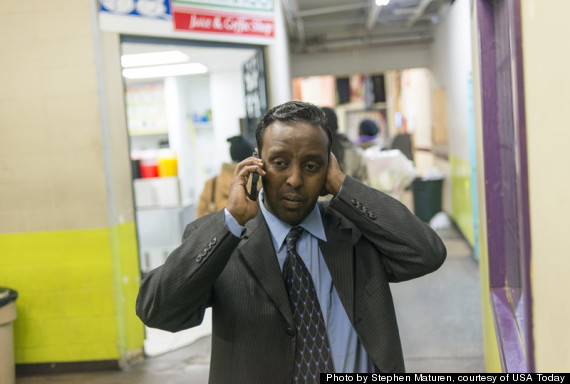 Mohamed Amin Ahmed has created a series of cartoon shorts called “Average Mohamed.” The cartoons are meant to counter the Islamic State’s efforts to recruit young Muslims in the United States. He is pictured at the 24th Street Mall, a Somali mall in Minneapolis.

Even before the most recent attacks, law enforcement officials and community activists throughout the U.S. had been jolted by the dozens of Americans who have sought to join the Islamic State.

Just days after the Paris attack, law enforcement officials announced the arrest of Christopher Cornell, an alleged ISIS sympathizer from Green Township, Ohio. Cornell, who was arrested after buying two semiautomatic rifles and hundreds of rounds of ammunition, had told an FBI source that he wanted to stage an attack on government buildings in Washington.

Last month, a 19-year-old suburban Denver woman was sentenced to four years in prison after she attempted to travel to Syria last year with the intention of assisting Islamic State militants. Shannon Conley admitted to the judge at her sentencing that she had been led astray.

“I am grateful to the FBI for keeping me from traveling to Syria and potentially saving my life,” a tearful Conley said during her sentencing hearing. “I disavow the radical views I have come to know.”

The growing push to address radicalization comes as the White House has tapped the Twin Cities along with Boston and Los Angeles to take part in a pilot program centered on preventing young Muslim Americans from being radicalized.

Imams from Minneapolis’ mosques have been holding regular dinner meetings with Andy Luger, the U.S. attorney for Minnesota, over the last several months to plan the way forward for the program.

Luger said he’ll unveil details this month about the Twin Cities program, including plans to build up job and youth programs in the region’s Somali community, which has suffered high unemployment, disproportionate levels of poverty and low graduation rates since Somalis settled in the area in the mid-1990s.

Several members of the Somali community are expected to join Luger in Washington on Feb. 18 for a White House summit on countering violent extremism. The Obama administration also included at least $4 million to fund research of domestic radicalization in its 2015 budget proposal.

“We’re looking at the root causes of radicalization in the first place,” Luger said of the pilot program. “A lot of what we’re doing here is in response to what the community has told us about why some of these young men and women are being recruited and why are they prone to being open to the message of recruiters.”

The lack of opportunity plays a central role in creating an environment that has made young people vulnerable to ISIS recruitment, said Abdirizak Bihi, director of the Somali Education and Social Advocacy Center.

“A lot of people are thinking that these young men went to Google one day and find ISIS and they are radicalized,” said Bihi, whose nephew was killed after joining al-Shabab in 2008. “It’s not that simple. Resources are key to solving this problem.”

But even as local Muslim leaders and law enforcement look for ways to strengthen connections in the name of preventing radicalization, civil liberty advocates and some Muslim groups are warning that the approach could lead to the federal government’s monitoring innocent Muslim Americans.

In 2008, at the height of concern over Somalis from the Twin Cities traveling overseas to join the Islamic militant group al-Shabab, the St. Paul Police Department won a $670,000 grant for what was called the African Immigrant Muslim Coordinated Outreach Program. According to a grant proposal from the department obtained by New York University’s nonpartisan Brennan Center for Justice, the program planned to maintain a list of individuals who refused to cooperate with the program.

Some Muslim communities are showing skepticism about law enforcement’s intentions, even as they become more vigilant of young people in their community who could be drifting toward radicalism.

One of Chicago’s most prominent Muslim organizations launched a program in October to teach children about Internet safety. Gihad Ali, the youth programs director for the Council of Islamic Organizations of Greater Chicago, said about 750 young Muslims have gone through the training.

Participants are taught that written or verbal support for a group listed by the U.S. government as a foreign terrorist organization can be grounds for charges. They are also told that the FBI uses informants to look for people who might be interested in colluding with terror groups.

“People can pretend to be whatever/whoever they want to be online,” a tip sheet distributed to students at the training warns. “Some of these people have bad intentions and are trying to harm you or anyone who falls into their trap. People might even pretend to be from other countries or represent groups that they do not really represent. Any information you say to them can be used against you.”

Ahmed, the creator of the Average Mohamed cartoon series, argues that American Muslims have to show a measure of trust with the government to deal with the radicalization problem.

“It goes without saying that the feds come with cheese and a trap,” Ahmed said. “But at the end of the day, they’re the only real game in town. They’re the only ones with the resources that can help us save our kids from ISIS.”